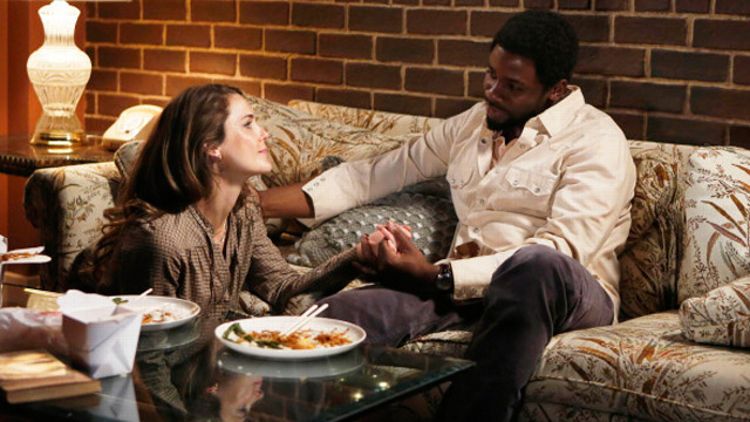 The last decade of great television dramas has primarily been about pushing willing audiences past hoary storytelling signifiers like “good” and “bad.” Over the past several years, we’ve cheered for serial adulterers and empathized with homicidal gangsters. TV has become a museum of masterpieces, nearly all of them painted in varying shades of gray.

The Americans, which features sworn agents of the “Evil Empire” as its protagonists, fits right in amid this gunmetal gallery. But for those living in its fictional 1981, that sort of nuance is a hard pill to swallow. It’s a world of troubled G-men and sympathetic Soviets, but the one thing the two sides share is an overwhelming desire to conform to some type of moral binary. We hear it most plainly in the slurred speech of Stan Beeman during his after-hours visit to Philip in the latter’s lonely Motel Шесть. Through the beers, Stan lauds his deceased partner as “a good guy,” before quickly adding “not like me.” To Stan, a good guy is a man without secrets, which suggests that, in Stan’s mind, a good guy is also a unicorn. Never mind the fact that Amador’s death happened precisely because he was harboring a secret: his off-the-clock surveillance of Martha. When Philip meekly asks who was responsible for the killing, Stan doesn’t blink: “Bad guys,” he says, either unaware of or embracing the irony. “And we’re gonna find ’em.”

He won’t have to look far. Nobody’s hands are clean as we hurtle toward The Americans’ first-season denouement. Everyone, from the tea-sipping socialists at the Rezidentura to the pleated Feds downtown, has a conscience stained the color of spilled borscht. And yet despite this, the principals seem incapable of considering themselves as anything but noble Cold Warriors: striving to be heroes, desperate to defeat the villains. The question for those of us in the audience is no longer which is which; it’s who cares? Stan shot a would-be medical student in the back of the head to prove a point, but what he does once he finally drags himself home is even more telling: “I’ve protected you from things,” he tells his wife. “If you want to have a family, be in a family, that’s what you do, right?” And Philip swoops into his own tarnished kitchen like a cowboy, rescuing his adoring kids from the harsh realpolitik of their mother. But thanks to their parents’ separation, Henry and Paige now see the world in the same neatly partitioned manner as the previous generation: Dad is a saint, Mom is the devil. Everybody wants to play the good guy, but no one has any idea what that even means.

“Only You,” in the grand tradition of TV greats like The Wire and The Shield, argued that when a criminal case wraps up tidily, it’s a pretty good sign the entire thing was based on a lie. The brilliance of the episode, and, indeed, this season as a whole, is that the lie in question — that Gregory killed Amador — is only the final stitch in an elaborate tapestry of deception and deceit. Gregory is no more responsible for the death of Beeman’s partner than Beeman is himself. But neither of them are exactly innocent either. The circumstances that led to Amador waiting outside of Martha’s apartment last week and Philip-as-Clark spooning with her inside were part of a long, slow spiral that started the very moment the pilot did back in January. Everything is so wonderfully knotty and connected on The Americans that it’s become impossible to suggest one episode is better than another. I’d say that last night’s hour, written by Bradford Winters and slickly directed by Adam Arkin (I loved the deliberate pan from Elizabeth drinking in the burgundy bar up to her sallow reflection in the mirror) was the best yet, but really it’s hard not to consider them all of a piece. It’s been a brilliant choreographed exercise in escalation. And it’s a shock to think there are only (DEFCON) three episodes left.

Ironically it was last night, while watching Philip and Elizabeth’s tightly wound cell begin to fray, that I found myself thinking more and more about how effective they’ve been at their jobs thus far. All of them have, really. Despite some emotional wavering and a fair bit of asset-tapping on both sides, the “secret war” that Gaad spoke of has been remarkably well-fought. Competence and professionalism are often as rare in fiction as they are in real life, so it’s been refreshing to see the FBI match the KGB at every turn. In a show spilling over with canine metaphors — last week it was Stan’s “soft mouth,” this week it was Claudia describing herself as a fiercely protective Great Dane — all of the characters have been admirably dogged. It would’ve been easy for showrunners Joe Weisberg and Joel Fields to goose their plot by portraying one faction or the other as lame ducks; to commit to one side being the hunters and the other the prey. Yet for as dirty as the fight has been, it’s remained oddly fair. There have been no cheap shots and zero bumbling. Gregory’s team was thorough in sweeping the car, but Stan was both thorough and relentless. It’s an attitude that got him his scalp — and a gory souvenir on his desktop — but little satisfaction. Within this small game board is a larger picture of stalemate, a word I just looked up for the first time in years. Colloquially, it’s come to mean a sort of unhappy truce. But in chess, it merely describes the moment when a desperate player has run out of legal moves. On The Americans, it’s when rules start to get broken and lives are lost.

The other benefit of Weisberg and Fields’ knack for structure is that it creates a sturdy vessel for gallons of surprisingly potent emotions. “Only You” was a story about Gregory, and thus it was both wildly romantic and deeply sad. I loved Derek Luke’s performance on this show nearly as much as he loved Elizabeth; the role of a radical who, like many radicals, could never really separate the political from the personal, brought out a depth in the actor that had previously only been hinted at. (His chemistry with Keri Russell was also very real and very affecting; she’s never been better than she was last night, her spun-glass face forever on the edge of shattering.) I had hoped there was a long-term role for Luke on The Americans, but the showrunners are as unmerciful with story as Claudia is with the truth. How unique is it for a series to be able to make me care so much about a fractured marriage that I cringed when Gregory put his hand on Elizabeth at the bar and then allow me to forget about it so completely that the couple’s final egg roll in the sack had me sighing like a teenage Twihard? Despite all the jazzy trappings of his cheeba-scented bachelor pad, Gregory was never anything less than sober about his situation. He adored the parts of Elizabeth that she also prizes — her toughness, her lack of compromise — but despite a desire to run away with a “master of disguise,” he didn’t harbor any illusions about anything else.

“The world that we live in is a little darker and a little uglier than I think you know” is how Stan put it to his wife in the bedroom he now goes out of his way to avoid. He was asking for forgiveness but not an escape. Work and a now endless cycle of revenge provide a framework that allows him to box out the messiest emotions and his own complicity in them. It’s the same for Philip and Elizabeth, who can snark at each other with real venom but still blandly conspire over the sink. It’s a terrifying type of training that lets them compartmentalize feelings the way they do. Last night, husband and wife each pulled a gun on a man who had romanced one of them and cuckolded the other but was remarkably loyal to them both. Neither could pull the trigger, and so Gregory had to do what had to be done on his own. “I never wanted too much, really,” he said in the episode’s most affecting bit of dialogue. “I just wanted to live for something … And to know when I’m done. Now I’m done.”

Gregory’s “reward” wasn’t a lonely stipend in Moscow but a stone-faced suicide by cop. His acceptance of both his limits — he’s right, there was no good Chinese takeout in the USSR — and his role as a pawn provided a stark contrast to the denial at work in everyone around him. Philip and Elizabeth are treasonous, murderous strangers in a strange land with two innocent children weighing down on them like millstones. Stan is a psychological wreck only comfortable giving in to the darkness he claims it’s his sworn duty to fight. What’s their endgame? What could possibly be their reward?

Star Ranks the Most Hated People in Hollywood, and Other Absurdities From This Week's Tabloids