Five Questions on American Idol: Feeling a Phantom Shift in the Top 9 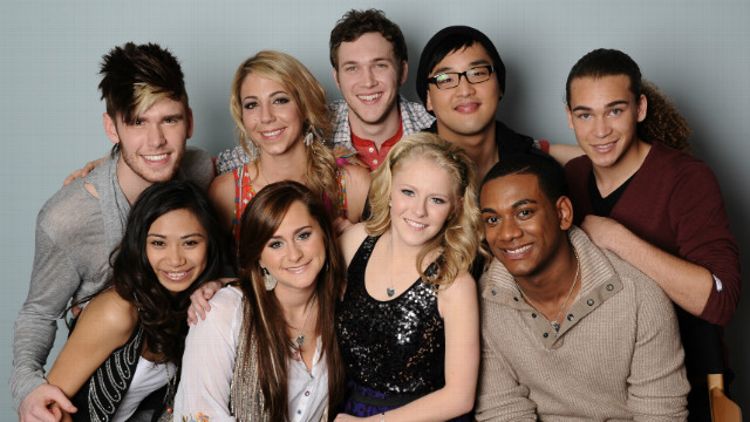 All season, Grantland Idol experts Mark Lisanti and Jay Caspian Kang will answer five very important questions after each performance episode. Though there are only nine contestants left, there is no explicit guarantee this cycle will ever end; it will probably stretch on well into 2015, just to destroy them.

It felt like there was a seismic shift in the Idol hierarchy last night. Did you feel it?

Kang: Yes! Skylar Laine rocketed past Jessica Sanchez, Joshua Ledet, and that kid who sings like Dave Matthews and always looks like he has a cattle prod shoved up in an uncomfortable place. Skylar’s now the clear favorite to win the whole durn thing. Yes, I tend to endorse any sort of conspiracy that involves Walmart and droves of teenage girls (still believe the Walton family fixed the Carrie Underwood Idol finale), but Skylar’s upward swing isn’t just some red state/blue state, flyover-whatever business. Of all the singers left in the competition, she’s the only one who doesn’t just sound like a very talented karaoke pro. Her personality and voice alone can sell albums. That’s pretty rare in Idol land and should carry her past the pubescent singing machines to victory.

It also helps that her backstory isn’t “My mom first watched Idol when I was 3 years old and decided that I was going to be the next Diana DeGarmo. I’ve done nothing else since.” (By the way, I saw Diana DeGarmo last year in concert. As in, I walked outside the Grantland offices to get a disgusting sandwich and it just happened to be the day before the Idol finale. There was a mini-stage set up in front of Staples Center and there was Diana DeGarmo, singing her heart out to an audience of me and a family from the Valley.) The problem with Jessica Sanchez, and, in some ways, Joshua Ledet, is that they’re both a bit too processed and manufactured. Skylar might be the same way — she might be a graduate of the Martina McBride Boot Camp for Empowered Dixie Belles, where they teach you to stomp and shake and act real pissed, but she owns guns and drives ATVs and talks like the angry woman who chases Foghorn Leghorn around the farm. None of that is bad.

Lisanti: Oh, good, this feels like one of those times where I can’t agree with anything you just said. Skylar was great, but very firmly in her Miranda Lambert/”I’m a-gonna shoot that man that a-done me wrong” comfort zone, which is in front of the karaoke machine in the back of her family’s general store, next to the cans of fry oil and sacks of gunpowder and lead, stomping around and scaring their aging hound dog, Reba. By the way, her backstory isn’t just the lunch counter in Mississippi, she also apparently did two national Broadway tours with Annie and Les Miserables when she was a little kid, which I don’t think the show has mentioned (maybe it has; after 400 weeks, I can’t remember), but Google just told me with very little prompting. So Skylar is basically the Southern Broadway brat version of SoCal Mariahbot J-Chez. Both manufactured, just in different plants. That being said, I can easily see her in the finals alongside Phillip Phillip Phillips the Phillips IV, playing out last year’s Cute Boy the Tweens Want to Hold Hands With (Scotty McCreery) vs. Cute Country Girl the Tweens Want to BFF (Lauren Alaina) endgame almost identically. Which is exactly why we’re both tired of this show. Only nine more weeks of watching that inevitable storyline unfold at an excruciatingly slow pace! I can’t blame you for inventing a “seismic shift” to keep your sanity; the depressing regularity of the weekly couch-fart tectonics is really too much to bear at this point.

Now is the time in our program where I post yet another great performance by J-Chez, our third- or fourth-place finisher:

What did you think about the “Groups of Three” gimmick, where Idol put the contestants into trios and had them sing stupid medleys?

Lisanti: You’re going to have to give me more information here. Is this what happens when I press the “skip ahead 30 seconds” button on the remote, or wander into the kitchen for no reason, or pick up the iPad to tweet about the noose I’m tying? They group up the kids and have them sing together? That sounds like a terrible idea. I hope they don’t actually do that. There’s enough of that nonsense on the results show.

Kang: Way to mail that one in, Lisanti. There wasn’t enough Storage Wars or Duck Dynasty on my DVR to build up enough fast-forward buffer, so I actually watched most of the show last night. The medleys were inexplicably awful and continued Idol’s season-long defecation on the great classics of pop music. This time, Fleetwood Mac, Michael Jackson, and Madonna all got pooped on.

Honestly, if you need to fill two hours of show, Idol, why not just have everyone sing two songs?

Kang: It was a good and necessary change of pace. Mary J. will always be the most helpful and inspiring guest coach, but sometimes you have to mix it up and bring in some crazy. This, by the way, was the formula that catapulted Idol to such prominence — Simon’s stern helpfulness and Paula’s apparent drug/drinking problem. (By the way, can you imagine how much better the show would have been had they started out with Mary J. in the Randy role? I continue to be completely mystified by his continued presence on the show. I’ve never met a single person who says, “I really like Randy Jackson.” In fact, if you like Randy Jackson, please explain why in the comments section below.)

Stevie definitely brought the safe, post-menopausal crazy, and I’m glad that the Idol producers finally watched The Voice and realized that as long as you’re going to have great singers on as guests, you might as well have them sing a bit. My favorite part of last night’s show was when she grabbed a terrified Hollie Cavanagh by the shoulders and whispered, “I’ve got some Xboxes, an eight-ball, and some incense in a van in the parking lot. Do you want to prank call that bitch Debbie Harry with me?”

Lisanti: Stevie Nicks was incredibly entertaining. Not only did she sing along with the contestants, tell inappropriate stories about personal tragedies (RIP, Mama Nicks), and offer just about every contestant a spot in Fleetwood Mac, she eye-fucked Colton Dixon and Phil Squared to within an inch of their lives. (I wouldn’t be surprised to discover her mansion in Laurel Canyon is fully stocked with skinny twentysomethings who wander around in nothing but tie-dyed T-shirts, waiting for her to flog them with a dream catcher. God knows she’s earned it.) Things got a little uncomfortable when they showed that photo of how much Phillip looks like a young Lindsey Buckingham, or when they showed ANY images of Jimmy Iovine’s hippie-libertine former self, who probably would’ve stubbed a joint out in his own eyeball if he knew (a) he’d actually live to see 2012, and (b) his 60-year-old self would dress exactly like Justin Bieber.

But she was great. Who knew we secretly wished the show would find a female version of Steven Tyler?

Would you go see Elise Testone in concert?

Lisanti: If she fronted one of those all-girls AC/DC tribute bands with the fem-puns for the name, like AC/D-She or Hell’s Belles or For Those About to Shop, which I think she’s not only dying to do, but will be her most viable post-Idol career option, then yes, totally. I’m paying the cover. That last band name was really sexist, I apologize. I did admire her “Whole Lotta Love,” but more on that in a minute.

Kang: She did seem much more comfortable in front of a band, singing a bar-bandy type of song. She has several bar-band-girl moves down — the crouch and scream, the cougar prowl, the air-humpin’-the-guitar-player, the unnecessary screech and the drunken strut. The only thing missing was the move when she passes out Jäger shots while singing “Sweet Emotion.”

Alas, I think young Elise’s fate is to sing at Foxwoods. Not in the main theater, but at like 3 p.m. on the casino floor.

Kang: It’s a tough night to handicap. Heejun changed gears at exactly the right time, going from “funny guy in the Bottom 3” to “serious singer who earns the first of five standing ovations for the night” (the producers have to do something about this — it feels like an elementary school talent show these days) and I think the shift will be just enough to allow him to inch past a very confused Deandre Brackensick. Falsetto goes home tonight.

Lisanti I’m inclined to agree, but for the sake of argument/consistency, I think Elise goes home (text-voters have no idea who Led Zeppelin is) from a Bottom 3 also including DeAndre and Heejun. It’s getting hard to pick, because all of them were their best selves last night, but we’re at that point in the season where the voters start picking off the quirky talent as they mercilessly cull the herd down to the tween-friendliest musical cattle. In my dreams they bounce Colton, because that Lifehouse song was awful (he went Full Gokey on us, way ahead of schedule), and we see him backstage with a sewing scissor, mutilating his beloved hair into a Dickie Bennett.

Jay Caspian Kang feels a shift.
Mark Lisanti points out it was just a passing truck.

Survivor: One World, Episode 7 - Soiled Pants and 'The Beauty in a Merge'