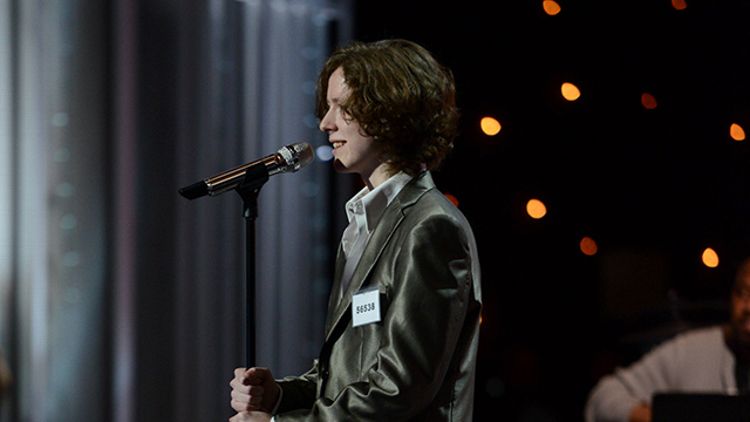 Whatever doesn’t deafen you makes you stronger: Grantland’s Jay Caspian Kang, Mark Lisanti, and Emily Yoshida have returned, bowed but not broken, to tackle another season of American Idol. This show is great and will continue to be perfect forever!

How are we feeling about things? We’ve had three more hours of show, with this new alternating boys/girls Hollywood Week format, to either deepen or frustrate our early affections. Did the format tweak accomplish anything? Was there less group drama?

Kang: The new group format accomplished this incredible feat: My confusion over what was happening on the show made my annual ritual of fast-forwarding through Hollywood Week almost impossible.

Lisanti: “Jay Kang admits to fast-forwarding through 90 percent of the show” has always been — and always will be — my favorite part of this process. It’s the magical moments we spend together, watching Randy Jackson’s face blurred as he hurtles unheard through time, that are the most special. (For the record, I watch every minute of this show, because I’m like one of those self-flagellating monks from The Da Vinci Code, flogging myself with a razor-festooned microphone wire and slicing every off-key note into my mortified flesh like a bloody prayer.) (Also for the record: This does not include results shows. My relationship with my Idol Maker only goes so far. I’m not insane.)

Group Night, for whatever reason, did lack the surefire drama of seasons past. Was that because of the pointless gender segregation? Unknown. Next week, the ladies will have a chance to fix that. And not one person left in an ambulance, felled by the impossible pressure of having to learn the words to a three-minute Extreme song. This clearly seems like a failure of the format — where were the montages of the groups clustered in hotel hallways, desperately attempting to pull together a four-part harmony? Where were the die-hards fine-tuning their choreography at 4 a.m. in a depopulated ballroom until one member finally cracks, leaving behind his ad-hoc family to go through the steps without him? Where was the on-stage meltdown of forgotten lyrics (OK, fine, everyone forgot the lyrics this week) and cracking, exhausted voices, ending with the ceremonial throwing-under-the-tour-bus of the group member who opted for three hours of sleep over a suicide mission?

This is what Hollywood Week is supposed to be about: chaos, betrayal, murder.
I guess I like it the old way.

Yoshida: Prediction: Segregating the genders will result in a relatively boring boys week, and an EXTREMELY AWESOME girls week. This basic principle has fueled 11+ seasons of Bad Girls Club, and they’re not even fighting for Mariah Carey’s approval on that show.

Kang: I clearly didn’t write this question because I can’t stand Charlie Askew (a.k.a. TheRealCaroleKing) or his so-called Charlie Askew syndrome. If you look like Raggedy Andy’s vampire child and can still stand on the Idol stage without fainting or curling up into the fetal position, you have a leg up on the rest of us who actually spent our high school years experimenting with LSD while playing Magic: The Gathering at debate tournaments in Fayetteville, North Carolina.

I know I said something similar about the girl on The X Factor who kept talking about how she had been bullied but then somehow had like 12 friends run on stage when she made it through to the second stage of the competition, but I think it’s about time we put the kibosh on theater weirdos getting all sorts of national sympathy for being theater weirdos. Especially when it’s abundantly clear that being a theater weirdo gets you a dozen friends and a two-year relationship with that nice girl who wears her dead grandmother’s dresses to school, plays the bassoon in orchestra, and lives in a house thoroughly soaked with cat urine. I always liked that girl in high school — she was really not all that bad as Lady Thiang in The King and I.

There’s a great moment in Marc Maron’s WTF interview with Fred Stoller where Stoller starts going on about “comedy nerds” and how the word “nerd” in general has been bastardized to mean anyone with a smidgen of ambition or intellectual curiosity. Real nerds, Stoller reminds us, were actually bullied. They didn’t have 12 friends. They sure as fuck didn’t get through Hollywood Week on American Idol.

I think it’s time we reclaim the word “nerd” from the hordes of preening egomaniacs who call themselves “nerds” in the same way a swimsuit model says, “I am OBSESSED with bacon and french fries.” You’re not nerds just because you wear glasses, host a podcast, and listen to Belle & Sebastian. Everyone does all those things now.

To answer the question: Curtis Finch Jr. was the best. He sounds like what would happen if R. Kelly put on 100 pounds and went back to church. And while I acknowledge that all it takes to win over my heart is a gospel singer in a white suit (Hello, Jacob Lusk!) and that this love has only ended in heartbreak, I’d rather go down with my ship than jump onto Lisanti and Charlie Askew’s shitty, magical hovercraft headed straight to Owl City.

Yoshida: Wait, when did Charlie ever self-identify as a “nerd”? Ryan Seacrest called him “different,” Nicki Minaj called him “special,” but it’s not as if he walked out in auditions and pushed his frameless glasses up his nose before breaking out into a Weezer medley. If he’s a “nerd” (such a sacred word! I know!) then he’s an extremely unfashionable one, which I think makes him a “real” “nerd” in the official People Who Talk About What It Is to Be a Nerd on Podcasts Rulebook? I wish jocks got nearly as nitpicky about what it is to be a jock. I hate all these words. I love Charlie.

That said, I don’t think I necessarily feel sympathy for Charlie Askew and his Eponymous Syndrome (GREAT band name, by the way) so much as I feel cellular-level exhilaration anytime he opens his mouth. That thing Nicki said about him being “so odd it’s right” is an imprecise way of saying that I go through an alternately harrowing and ecstatic four-step process every time Charlie does pretty much anything:

2. Mortification (“No no no, don’t do an intro that ends with the title of the song like you’re at some kind of senior center Broadway revue trying to get old people to guess what you’re going to sing next, no no no.”)

3. Epiphany (“Oh, wait, he still hasn’t sung a single off note, has he? Oh, wait, he might be the best male singer this season, mightn’t he?”)

This is followed by a loud, involuntary cackle and a feeling of great satisfaction that lasts for about two seconds, then invariably something sends me back to:

I still don’t know if I necessarily want to see Charlie win, but anytime he’s on screen, I cannot look away. I haven’t had such a hard time reconciling how great/weird a performer makes me feel since someone put a Tom Waits song on a mix CD for me for the first time in high school. I don’t know if I even want him to be on screen more because I’m so afraid he’ll bust out another horrible line like “I glorify weirdness,” and I’ll be forced to retire to an early grave, but I’m willing to take that risk.

Lisanti: Sometimes Mr. Unseen Questioner has to tee one up for Emily because she’s the only one who’s still — occasionally, at least — capable of experiencing a human emotion. Don’t worry, we’ll break her. They all break eventually. “Can you give us just one minute of professionalism?”

They keep adjusting the format slightly, but couldn’t the entire show be saved by one radical change? Ditch everyone on the panel but Nicki, have her rule from atop a teetering pile of broken desks, and sentence all inadequate contestants to a probably fatal frozen river crossing? Fine, Keith can stay, but he has to wear a thick chain around his neck that Nicki shakes whenever she wants him to do a little dance, and maybe whimper out a tender affirmation when the situation calls for it. But everyone else goes. She has this show figured out. Last night was a Minaj tour de force.

Oh, Nicki also gets a machete and a tambourine in this new deal. Obviously.

Where the hell did Devin Velez come from? Yeah, the song choice is too obvious, and he overdoes it with the runs a bit, but find me an off-key note in there. There wasn’t one. And he wasn’t even distracted by Randy’s audible orgasm at :57, which not only threw me, it made my testicles retract all the way up into my shoulders. The kid’s got poise. Right after Keith said, “You were born to sing,” he walked off the panel and quit music forever. No one noticed.

Kang: Not yet. But do you think they’re trying to tween-proof the boys this year? I still don’t see the flopsy heartthrob who will ultimately win the competition. Johnny Keyser doesn’t really fit the bill — he’s more the guy the tweens want to meet when they’re 45-year-old alcoholics on vacation in St. Thomas.

Yoshida: Very sad about Micah Johnson’s elimination, but it wasn’t shocking after his solo performance. Same goes for Nate Tao, even though we didn’t see exactly how he managed to botch it. Overall, none of the solos last night really did much for me (except CHARLIE ASKEW); it wouldn’t have surprised me if they just sent home all the dudes (except CHARLIE ASKEW) and made it an all-ladies season. They could call it America’s Next Top Future X Factor Judge. Because no matter how tween-unfriendly you try to make the guys half of the competition, there’s no other way you’re guaranteed to get a female Idol out of this season — the Jimmy Smith fan army is champing at the bit, ready for that live show social media onslaught.

Lisanti: RIP, Gabe Brown. You were too metal for this life.

Kang: I guess it’s a nice story: The first Bat Boy to ever win a televised singing competition!

Lisanti: Ahem. I think a certain Phil Stacey might quibble with that:

Nick Boddington’s voice is CRAZY. There were some points in there where he reminded me of the singer from Muse. This a comparison that will hopefully seem less insane if they have him perform “Knights of Cydonia” to win the whole thing.

Yoshida: OK, on second viewing, I was sold on Nick Boddington, but I hate his watered-down Dylan makeover between this season and the last. I totally understand how a new outfit can make you feel like a different, more confident performer, but with Nick it seems to betray a central lack of trust in himself and his talent. Which is, of course, ridiculous, because his voice is ridiculous. I’ve got no hate for the (judicious) use of Auto-Tune on a (good) pop song, but anyone who wins a Grammy for one this weekend should watch Nick Boddington hit those three notes on the word “Staaaaars” with a level of precision rivaling his eyebrows and feel very, very embarrassed.

Wow, the guys sure like Christina Perri’s “Jar of Hearts,” don’t they? Any songs you’re ready to see retired yet this season?

Kang: What’s the deal with that song? Didn’t Joshua Ledet already throw it down, never to be oversung again?

Yoshida: If we could just talk about CHARLIE ASKEW one more time: While he did a great job with it, I never want to hear “Somebody That I Used to Know” on any talent show again — not because it’s a bad song, but because every time someone sings it, they invariably get slapped with an “artist” sticker by the judges, and you know how I feel about words in quotes. But, hey, at least there were no mimes.