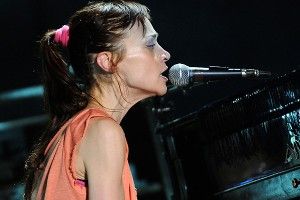 In our first installment, Fiona Apple got arrested for possession of hash in Texas, was freed on bail, then lashed out at her jailers in perfectly odd fashion: She claimed she had overheard some illegal shit go down, that she was filing all incriminating evidence away in various lock boxes for potential future use, and that, whenever she wanted, she could make these bad guys “famous.”

In our second installment, the accused Texas police force shot back, in the form of one epically bitchy open letter from Hudspeth County Sheriff Rusty Fleming. It read, in part: “First — Honey, I’m already more famous than you, I don’t need your help. However, it would appear that you need mine. Have you ever heard of Snoop [Dogg], Willie [Nelson] or Armand Hammer? Maybe if you would read something besides your own press releases, you would have known BEFORE you got here, that if you come to Texas with dope, the cops will take your DOPE away and put YOU in jail. Even though you and I only met briefly in the hallway, I don’t know you but I’m sure you’re an awesome and talented young woman. I’m sure that [your fans] would just as soon you get this all behind you and let you go back to what you do best — so my last piece of advice is simple ‘just shut-up and sing.'” Thanks, Rusty. Great stuff.

And for the conclusion of our trilogy, we come to Apple’s Tuesday night show in New Orleans, where Fiona once again treated the stage like a pulpit where she could air out her legal troubles. Basically she say she’s sorry, the lock boxes were a confusing metaphor, let’s all just move on with our lives. Agreed! And thanks for wrapping things up so neatly, Fiona. That was a lot of fun

Justin Timberlake's "CASTRATION CELEBRATION!" … and Other Horror Stories From This Week's Tabloids