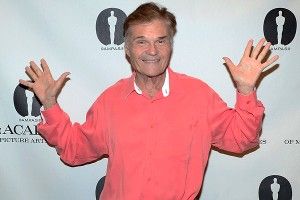 Well, here is a thing that has happened: Fred Willard — the avuncular staple of the Christopher Guest repertory players, the go-to clueless old-guy for dozens of other movies, and, most recently, host of ABC improv show Trust Us With Your Life — has been arrested for what can only be referred to as “pulling a Pee-wee Herman.” In fact that’s what TMZ, which reported the story, has dubbed it. They also provide some actual information: “Fred Willard was arrested for lewd conduct last night in Hollywood when police allegedly caught him with his pants down in an adult movie theater … According to law enforcement sources, LAPD undercover vice officers went into the Tiki Theater in Hollywood and found the 72-year-old Anchorman star watching last night’s feature … with his penis exposed and in his hand — aka, pulling a Pee-wee Herman. We’re told Willard was arrested around 8:45 p.m. and booked for lewd conduct. It was a quick release — we’re told he was out of police custody a short while later.”

Well. Huh. OK. This is all a bit awkward to discuss in public. But, like, certainly he had a perfectly good explanation for all for this, right? And look, whatever else may be true, it all did eventually work out for Pee-wee. For now, though, we can only ask one thing: Fred, wha happen?

Pretty Little Liars Season 3, Episode 6: 'The Remains of the 'A''