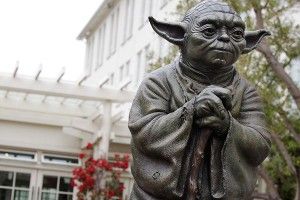 Yoda’s maybe getting his own movie! Ain’t It Cool News reports that Disney’s Star Wars reboot will include a slew of standalone flicks, with none other than mf’ing Master Yoda up first. Says AICN, “At this stage specifics are sparse, but Kathleen Kennedy” — Disney’s point person for all things Lucas — “is putting together a STAR WARS slate … The first Stand Alone film is going to center upon YODA.” Now, obviously, your mind is wandering. A whole slate? We’re getting a Jabba movie? We’re getting a Boba Fett movie? We’re getting a Grand Moff Tarkin movie?! Let’s not get carried away; most likely, none of this is going to happen, starting and ending with this Yoda rumor. Which would be a shame. I don’t care if basically every line of dialogue he dropped in the original trilogy was basically perfect. We’re way past any precious concept of “sanctity” for Star Wars, and so now I just want as much Yoda action as I can possibly get. So … whoo! Yoda movie!

Chris Pratt to play astronaut. But not just any astronaut: a Star-Lord astronaut. Ehh, what? Yahoo! explains: “Pratt is nearly confirmed to be playing the human (-ish) lead role in Guardians of the Galaxy … [he’ll] be playing Peter Quill, an astronaut who’s reinvented as Star-Lord when he teams up with a group of strange characters from another time and dimension.” Pratt’s had small but juicy roles in stuff like Moneyball and Zero Dark Thirty, and so I, for one, am glad to see him stretch out in spandex. Also, while Pratt was the second choice after Joseph-Gordon Levitt, he was chosen over Jim Sturgess, Zachary Levi, John Krasinski, and Michael Rosenbaum. Suck it, Krasinski! We all now who’s gonna be top dog at the NBC Christmas party this year.

Michael Keaton to do Speed. THR reports that Keaton has joined the adaptation of the Electronic Arts game Need for Speed, a “story of a local street-racer ([Aaron] Paul) who partners with a rich and arrogant business associate ([Dominic] Cooper), only to find himself framed by his colleague and sent to prison. After his stint in the joint, he joins a New York-to-Los Angeles race to get revenge. But when the ex-partner learns of the scheme, he puts a massive bounty on the racer’s head, forcing him to run a cross-country gauntlet of illegal racers in all manner of supercharged vehicles … Keaton will play the reclusive and eccentric host of an underground supercar race where he invites the best drivers from around the world.” And while that sounds like a stellar cast with a rock-solid plot concept, let’s face it: The real reason this movie is being made is that the word “need” rhymes with the word “speed.”

Sean Bean Ascends. Deadline reports, “Bean has been set by Warner Bros for a starring role in Jupiter Ascending, which Lana and Andy Wachowski will direct as their next film. Bean will play Stinger, a Han Solo-type character written older than co-star Channing Tatum. He joins Eddie Redmayne, Tatum and Mila Kunis.” And the real story here, of course: After Cloud Atlas, someone is letting The Wachowskis make another movie?