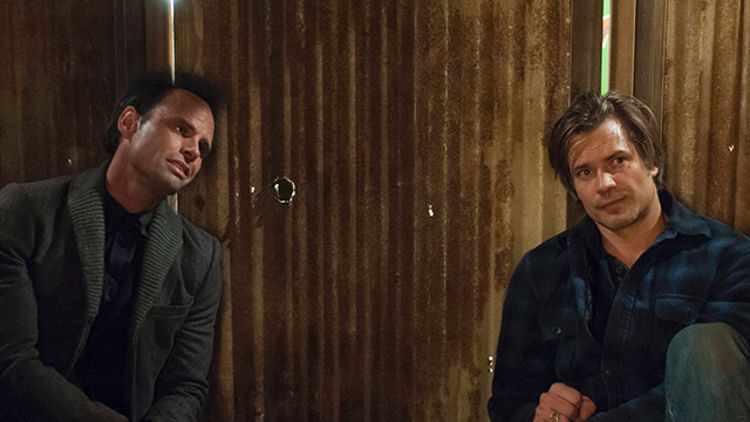 Watching “Kin” might be the most fun I’ve had watching an episode of television in a long, long time. There’s something effortless to it, something that just races along from plot point to plot point but never feels forced or breathless. There are times when having this many balls in the air can make a series feel labored, and there certainly were more than a few times during the last season of Justified. But “Kin” brings nearly every plot from this season — only the snake handlers are missing, I think — into the same stew, and then it adds a few more for good measure. It’s a big, complicated episode that never once feels like it’s hard to follow. Pulling something like that off is more difficult than it might seem, and the writers should be commended for making it so easy for the audience to keep everything straight.

At the same time, one of the things that makes “Kin” both easy to follow and so much fun is that seemingly every character actor in Hollywood came to play for this one. This episode features, among others, Romy Rosemont, Stephen Tobolowsky, Gerald McRaney, and Jere Burns, and every time someone new pops up, whether it’s someone the Justified audience already knows or a newcomer to this universe, said guest character is played by a well-established “Hey! It’s That Guy/Girl!” type. In some ways, this helps orient the audience — when we see during a quick scene that Arlo’s attorney is played by Rosemont, it becomes that much more apparent that she’s going to be important to the story going forward. Similarly, when McRaney pops up as a cantankerous old coot, it’s obvious he won’t be in just the one scene. On some shows, this could kill the suspense; on a show as jam-packed as Justified, it’s nice to know what to focus on.

Justified has always worked well when it has some sort of time constraint placed on it, and “Kin” is no exception. The FBI has hauled Arlo into the marshal’s office, which it apparently just uses for all official business now. The idea is to find and haul in Drew Thompson, so that the bureau might finally get a bead on bringing down Theo Tonin. Raylan, not wanting his father to cut a deal that will result in Arlo’s immunity for having murdered a police officer last season, decides that, hell, he can find Drew Thompson before the deal is finalized. And how long does he have? Twenty-four hours? Well, that’s nothing when you’re Raylan Givens, even if we’re talking about a man who’s successfully eluded FBI capture for the better part of 30 years.

Naturally enough, it’s not just the FBI and marshal’s service that are interested in bringing in Thompson. The Detroit Mafia — led by Tonin, let’s not forget — would very much like to see him hauled in alive, so Tonin can dish out whatever punishment seems reasonable. A representative of said criminal organization, played by Mike O’Malley (see what I said about all those character actors?), pairs up with Wynn Duffy and the Dixie Mafia to make this happen, but only after shooting FBI agent Jerry (Tobolowsky) — who was in cahoots with the mob the whole time — through the head in a great, shocking moment that gave the episode a boost of visceral excitement. Wynn decides his best bet for finding Drew Thompson is to put Boyd on the case, which is how Boyd and Raylan end up thrown into a weird holding cell by the Hill People.

All right, I might’ve skipped a few steps there, in the interest of not just reciting a play-by-play of everything that happened; but you watched this, and you already know. What’s sort of amazing to me is that the show takes Raylan (and Boyd, presumably) from the initial mission to Josiah (McRaney) up to the straight-out-of-a-’70s-horror-film Hill People in about 15 minutes, and it never once feels strained. Trying to cram this much into an episode of TV usually shouldn’t work, but here it does, because the audience can feel the constraints of the 24-hour deadline as surely as Raylan and Boyd can. It also helps that the show has kept those two characters separate so far this season, so when Raylan is tossed into that weird crate and Boyd drawls, “Hello, Raylan,” it feels like the culmination of something we’ve long been waiting for. We love to see these two get into pissing matches; here’s our first chance this season. (Another secret to what makes Justified work: delayed gratification.)

The Hill People are exactly the sort of off-the-beaten-path subculture that lots of other shows would make too quirky and weird to be believable. (See also: Big Love’s interminable subplots on the Juniper Creek compound, which occasionally made the show feel like a PSA about the dangers of unchecked polygamy.) I don’t know that Justified really made them — unlike a lot of side characters this season — seem interesting in their own right. I didn’t find myself hoping there would someday be a Hill People spin-off. But the show also economically sketched out their culture, and it never suggested that they were crazy for wanting to live so far off the grid as to basically become a scary folktale. (Constable Bob thinks they eat people!) I can’t say I’m wild about Raylan ending up among a bunch of grizzled hillbillies who want only to kill him, when the show has successfully avoided playing into those stereotypes so far, but the episode also undercuts this somewhat with the revelation that the Hill People have a phone, and that a distant relative of Raylan’s — his mother’s cousin — still lives up in the hills, a connection that ultimately saves his life.

While all of this is going on, Colton is trying to find Ellen May, after lying to Boyd about successfully killing her. It’s a mostly minor thread that plays out around the edges of the episode — after seeming like it might end up being the most important thing in this week’s episode at the end of the last one — but it comments on the main action in often humorous ways, as when Colton asks Tim, hey, as a marshal, what’s the thing he’d do if he needed to find somebody who’d just disappeared in a puff of smoke? (Tim deflects by directing Colton to apply for a job with the marshal’s service.) But it all comes to a head by the end, as a series of terrific cliffhangers unspool. See, the reason Sheriff Shelby keeps saying that his deputies don’t know where Ellen May is is that she’s hiding out at Shelby’s place, and he wants her to help him bring down the Crowder empire. (All at once: Oooooh!)

But that’s not all! The other cliffhanger involves Raylan returning to Josiah’s place to tell the old man that he was selling Raylan a bunch of bunk when he said Drew was hiding out among the Hill People. What he finds, however, is terrifying: Someone has sawed off Josiah’s foot to remove the ankle bracelet that keeps him on his property and absconded with the old man. And now all Raylan has to go on is said severed foot. Disappeared in a puff of smoke, indeed.

See what I mean about “Kin” being so much fun? The main plot is so absorbing and exciting that, for a second there, I forgot about the fact that the episode opens with Winona’s first appearance of the season, in which she pops up at the clinic for a pregnancy checkup, Raylan at her side. And I also nearly forgot about the return of Constable Bob and the flashing teenager from the season premiere. (She turns out to be Josiah’s stepdaughter.) And I forgot about all the groundwork this episode lays — effortlessly so! — about what, exactly, Drew Thompson did to make him the most wanted man in the universe. (It involves shooting Theo in the eye, something he’s still not happy about.) That the episode manages to have this much in it without once feeling like it’s trying too hard is a testament to just how rollicking and capital-G Great Justified can be when it gets on a roll. Or, put another way, I have a screener for next week’s episode, and it took everything I had in me to write this before I went ahead and watched it.

Now that I’m done, though …

Todd VanDerWerff is the TV editor of The A.V. Club. His writing has also appeared at the Los Angeles Times, Hitfix.com, and The House Next Door.

The Oscars Just Got a Little More Avengers-y