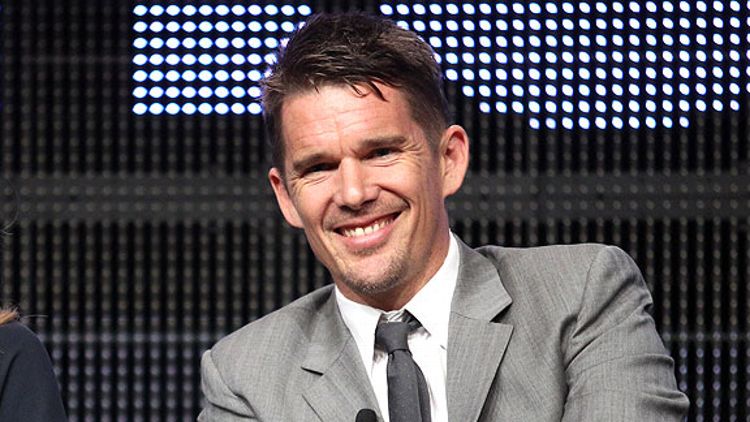 Ethan Hawke tried to break into the TV game back in the spring with the CIA procedural Exit Strategy, but Fox didn’t pick it up. Now Hawke’s giving it another whirl: he’s signed on to Blue Tilt, an NBC cop show starring two detectives balancing work with their families. Vincent D’Onofrio, who’s got some experience as a TV cop from Law & Order: Criminal Intent, will play Hawke’s partner. Think carefully before rejecting this one, NBC: If it doesn’t work out, Hawke could very well decide to write another novel. Grade: B+ [HR]

Snoop Dogg is going to star in a movie! The man of a million cameos is attached to the title role in The Legend of Fillmore Slim, a biopic about the bluesman/pimp known both as “The West Coast Godfather of the Game” and “The Pope of Pimping.” When reached for comment on the role, Snoop explained that “it should be pretty pimpin’ pimpin’.” Grade: A [Deadline]

Nigel Lythgoe, the American Idol producer and So You Think You Can Dance judge, is getting his own firm, Nigel Lythgoe Productions. The company won’t just be toeing the line, however, and have already announced an ambitious slate of Chekhov adaptations. Just kidding. They’re gonna make some show with Kim Kardashian. Grade: D [HR]

David Oyelowo, the villainous head of the research lab in Rise of the Planet of the Apes, is in talks for One Shot, the Tom Cruise thriller about an ex-army cop involved in the investigation of a sniper accused of a mass homicide. Oyelowo will play a cop also working on the investigation. It doesn’t sound like Oyelowo will have a chance to be murdered by CGI monkeys in this one but, you know, fingers crossed. Grade: B- [HR]

Morris Chestnut has signed on for a multi-episode arc on Ryan Murphy’s new show, Horror Story, about a married couple (played Dylan McDermott and Connie Britton) who move into a haunted house. Chestnut is rumored to just be using the role as a springboard to Murphy’s other show, Glee, because he does a mean “Funny Girl.” Grade: B [Variety]

ABC, NBC and CBS are all bidding for a comedy pitch called On The Verge of Greatness, a single-camera twentysomething ensemble number from director/producer Jake Kasdan and writer/producer Tom Gormican. When queried as to why it wasn’t bidding on the show as well, Fox just let out a dry, dismissive laugh and haughtily turned away. Grade: C+ [Deadline]

DC Comics character The Spectre — an ex-cop stuck in purgatory tasked with apprehending bad guys on behalf of his fellow dead people — has been bought by Fox. That actually sound a lot like the plot of the upcoming Jeff Bridges-Ryan Reynolds movie R.I.P.D. which, you know, awkward. Grade: D [Deadline]