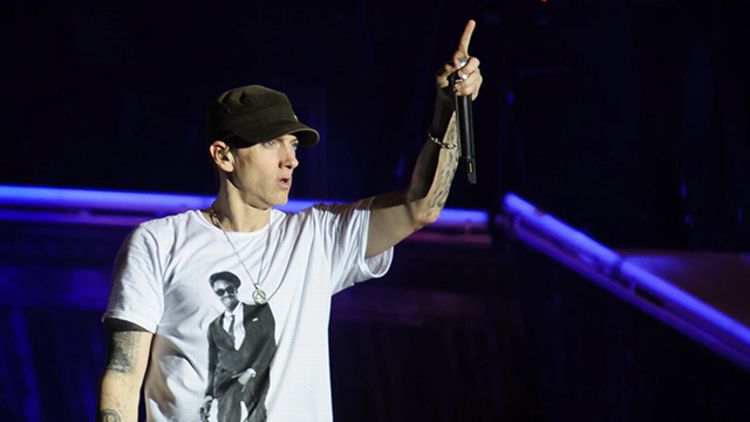 By now you’ve probably heard “Rap God,” the latest track off Eminem’s upcoming The Marshall Mathers LP 2. You’ve probably marveled at its speed, its bombast, its unyielding, laser-focused attack. You may have run it back a few times, even, trying to unpack that furious blizzard of syllables Eminem unleashes in the third verse. And you may, by now, be thinking something along the lines of “now this is how a sober 40-year-old former madman proves he can still rap his ass off.” Which, unfortunately, sounds exactly like the reaction Em was hoping for. Never before has this dude seemed like he’s working this hard for our approval.

And what, precisely, is wrong with a rap dude working hard? Well, nothing. The problem is sounding like you’re doing it. We’re not talking about Biggie or prime Jay Z’s defining, platonic ideal of effortless domination here, but something almost the inverse. Eminem at his most potent was fueled by rage, regret, and an all-encompassing sense of self-loathing. And what made that powerful — rather than, you know, utterly, soul-crushingly debilitating — was that he, unlike so many MCs before him and so many to come claiming the same, did not give a fuck. Like a true depressive, he was too tired to care.

On “Rap God,” all he does is care. Every ounce of sweat and every nook and cranny is polished, every last bit of nonsense power-drilled together: It’s Eminem tugging on your coat sleeve, getting you to turn around, and then screaming in your ear Yo, I still got it. And you just wanna brush him off: Sure, yeah. Whatever. Kanye can let us see him sweat: His eternal, bug-eyed grind for greatness is his life source. Eminem’s life source was his desperation.

Post-sobriety and Recovery, that changed. At one point on “Rap God,” Em says “it’s honestly futile if I don’t utilize what I do, though / For good at least once in a while / So I wanna make sure somewhere in this chicken scratch I scribble and doodle / Enough rhymes to maybe to try and help get some people through tough times.” A positive, earnest message — and completely a bum-out. This is the same dude who used to put on lipstick and get high by crushing up whatever he found in the medicine cabinet?

Well, yeah. Of course it is. He grew up. He got stable. He doesn’t wanna tick off the many ways he’s contemplated suicide anymore. He wants to help troubled kids via the uplifting power of sappy Rihanna ballads.

I don’t mean to get worked up. It’s just one song, and there’s a lot going on here, and some of it is totally fascinating. The chorus is staying with me. “I’m beginning to feel like a rap god,” he says, and that sounds about right: Only now, roughly a decade after he cemented his immortality beyond a shred of doubt, is Em starting to come to terms with it. At his peak, he was brilliant at self-laceration. Here, he gives us some more: “So I crunch rhymes, but sometimes when you combine / Appeal with the skin color of mine / You get too big and here they come trying to censor you.” Forgot the censor you and focus on too big. At some level, Eminem can never accept that he’s earned this.

And then again: “Little gay-looking boy / So gay I can barely say it with a straight face-looking boy”? When he was on, the offensiveness — biting, relentless, and often wickedly funny — was a crucial part of his arsenal. “Kill You”: “”Oh, now he’s raping his own mother / abusing a whore / snorting coke / and we gave him the Rolling Stone cover?” “Dead Wrong”: “There’s several different levels to Devil worshippin’ / horses’ heads, human sacrifices, cannibalism / candles and exorcism / Animals / havin sex with ’em / camels, mammals and rabbits / but I don’t get into that / I kicked the habit.” And that, up there? That ain’t it.

The stated mission statement of “Rap God” is to prove that he’s still untouchable: “I gotta keep a few punchlines just in case, cause even you unsigned / Rappers are hungry looking at me like it’s lunchtime.” And then he gives us stuff like: “This slickety, gibbedy, hibbedy hip hop / You don’t really wanna get into a pissing match with this rappidy rap / Packing a Mac in the back of the Ac, pack backpack rap, yep, yakety-yak.”

Eminem came up battling (and visiting those grainy YouTube clips and radio freestyles now is a joyful k-hole). But what made him an all-time great was the once-in-a-generation swirl of his technical ability with his fucked-up life and his courage in delivering us his story unadulterated. After turning pro, he locked horns more than a couple of times, and dis tracks did always bring out the best in his all-purpose evisceration. But it’s appropriate that none of his combatants — sorry, Everlast, sorry, Mariah Carey — were worthy of stepping into the ring with him. If anyone was going to properly get in Eminem’s head, it was gonna be him. This is the man who actually managed to build a devastating turn, in the Benzino dis “Nail in the Coffin,” around the line “What you know about being bullied over half your life … ”

All of which is to say: To see Em, now, resorting to empty, simple trickery for the sake of it … well, like Pun said, “That’s a fuckin’ joke.”