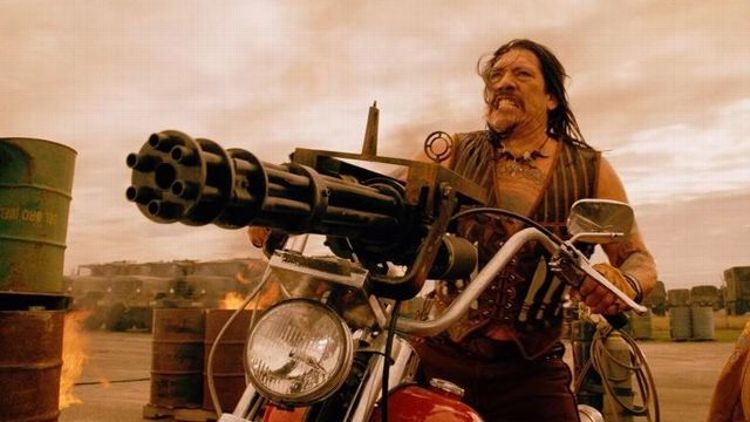 It’s a shame that Robert Rodriguez is trapped in the shadow of Quentin Tarantino. After Grindhouse it felt like together they were Wham! and apart one was George Michael and the other was the guy who put up with George Michael’s fame. Comparing Rodriguez to Andrew Ridgeley might actually be unfair. I can name all of Rodriguez’s films. But Grindhouse confirmed their divergent handle on junk. Tarantino’s half, Death Proof, gave you the ’70s road thriller as feminist revenge comedy. At 76 or so minutes, it was miniskirt moviemaking: short, tight, and wow. Rodriguez’s half, Planet Terror, was an extra-large caftan scribbled on by feral kindergarteners and ripped up by wolves: fun, ragged, ugly, in need of a timeout.

When Rodriguez’s bad taste can bite into politics or a flavorless genre, he comes alive. You see something like 2010’s Machete, and you feel like Rodriguez finally found his calling as a shlock editorialist. The movie came during the height of our country’s immigration debates and opted for guerrilla lunacy to attack racism and oppression and U.S.-Mexico relations. Most of his throw-it-all-at-the-wall filmmaking actually stuck. You could tell the ideas meant something to him. And the exuberance in Machete turned out to be a perfect twin for the shock radicalism fueling Tarantino’s Django Unchained. The Tarantino is disciplined where the Rodriguez is wild. But both are grisly, dangerous, and violent. Machete you could dismiss as a cartoon. It didn’t seem to disturb the peace the way Django did. That’s too bad. It has the same gonzo force.

The majority of Rodriguez’s output in the past 21 years has been a sequel or a remake or a riff on old material. I don’t know why he felt he needed to make Machete Kills. He might be like me; he might have watched an episode of Modern Family and thought it would be really interesting to put Sofia Vergara in a Russ Meyer movie and strap her into a machine-gun bustier. Maybe he thought it’d be even more fun to strip most of the politics from Machete and to make his eponymous unkillable ex-federale turned spy, played by Danny Trejo, into a mannequin of badassery.

This time Machete is recruited by President Rathcock (Charlie Sheen, reverting to what his birth certificate says: “Carlos Estevez”) to stop a Mexican crazy revolutionary (Demián Bichir) from destroying Washington. The sequel never heads anywhere, even once it ends up in outer space. All Rodriguez does this time is pour on the cameos and absurdities and nonsense — including Mel Gibson as an evil billionaire. The degree to which Rodriguez doesn’t know what to do with himself extends to having Walton Goggins (the credits list him was “Walt”) share the same character with Cuba Gooding Jr., Lady Gaga, and Antonio Banderas. It may sound like fun, but the party never leaves Rodriguez’s head.

The marketing for this movie calls William Shakespeare’s play “the most dangerous love story ever told.” That’s not false. Julian Fellowes’s adaptation captures the crazy desperation Romeo and Juliet bring out in each other. They meet, they marry, they kill themselves. But that’s academic here. You leave feeling like you’ve just watched the answer to the question “How would it look if a movie pretended its source material were young adult fiction?”

Not far in, Juliet (Hailee Steinfeld) whips her head around, sending her hair swinging over her shoulder, and smiles. The first time we get a load of Romeo (Douglas Booth), he’s chiseling a sculpture in his studio, with his shirt open to his navel. He steps into the camera frame, swings his hair, and then parts his puffy lips and smiles too. They’re like the “Hailee Steinfeld” and “Douglas Booth” credits in the opening-title sequence of some Disney Family show — R&J 4Eva. Ed Westwick even gets to do some hissing as the doomed Tybalt.

Fellowes and the director, Carlo Carlei, try to build a thriller from the inevitable doom. But they don’t have the acting for that. Steinfeld and Booth are pleasant, but they don’t burn the way two actors need to for the culminating tragedy to wreck you. The movie has a presiding cuteness that compromises the danger. Damian Lewis makes Lord Capulet a sniveling fool, but he knows how to extract meaning from the text. It’s too much, but you see where he’s coming from. Paul Giamatti plays Friar Laurence, and were the rest of the acting at his level of ferocity we’d be looking at something superb. Instead, his tears and anguish are embarrassing. Why is he this committed to a movie in which no one else is trying to hit similar notes?

To do this movie now, you need either the eroticism of the Franco Zeffirelli movie version from 1968 or the mental illness and mania of Baz Luhrmann’s 1996 adaptation. Fellowes’s movie cannily emphasizes the Capulet family’s need for Juliet to marry well. But Victorianizing the material also deadens it. What I’d love to see at the movies is another version that holds nothing back, an interpretation of an interpretation — Robert Rodriguez applying his garbage sensibility to an all-Chicano West Side Story. He could make you feel the danger all over again.

Just a note for anyone writing or directing a movie right now: Please don’t name your main character Grace. It’s like naming her Florence Nightingale, Mother Teresa, or Oprah. You’re asking to be graded on curve. Destin Daniel Cretton’s movie (his second) looks at the staff at a foster care facility and the troubled kids roiled by its day-to-day activities. Grace (Brie Larson) is a staffer who starts to see some of her own troubles in a recently admitted teen (Kaitlyn Dever). But it takes most of the film’s hour and a half to begin to explore the parallels.

The movie opened late in August and is still playing around the country, largely due to interest in Larson’s performance. She’s as good as people says she is. But the performance takes too long to take shape. The movie seems caught between dark realism and a forced comedy. In the opening minutes, a kid runs screaming out of a building and the workers catch him. One of the young attendants, Mason (John Gallagher Jr.), continues the story he was telling before the kid interrupted him. It’s as though nothing ever happened. Both the movie and the facility’s employees are like this: concerned, self-conscious, and a little incompetent. A lot of the film focuses on Grace’s relationship with Mason, and you never know why you’re watching that when there’s a beautifully acted, closed-in foster kid named Marcus (Keith Stanfield) aching at the movie’s margins. But the answer is basically: That’s what they suggested in my screenwriting workshop.