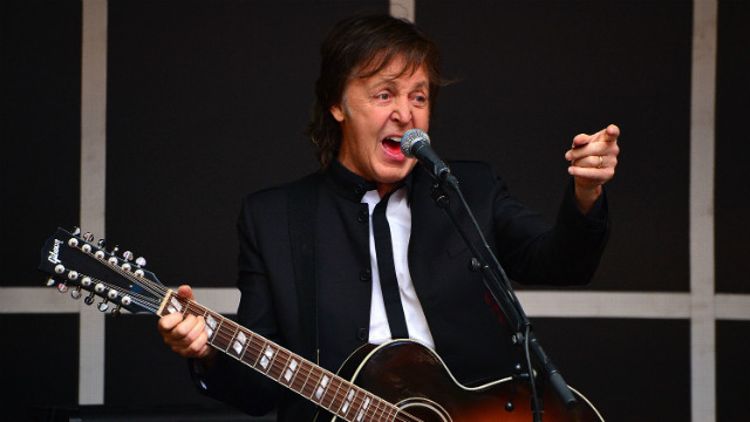 It didn’t occur to me until hours after seeing the first of Paul McCartney’s three-hour, 38-song sets at Brooklyn’s Barclays Center this summer, but had Brooklyn been a stop on the 1976 Wings Over America tour — McCartney’s first post-Beatles slate of U.S. concert dates — he could have played 36 of the same songs without creating any continuity errors. Glance at the set list and you’ll see two songs recorded in the last 35 years: “Here Today,” McCartney’s 1982 tribute to John Lennon from the album Tug of War, and “My Valentine,” a single from his 2012 collection of (mostly) covers, Kisses on the Bottom. More than a third of the selections were no. 1 hits, and most of the rest were singles that climbed almost as high.

I’m not going to be the guy who goes to see a beloved baby boomer act and comes away complaining that “they only played the hits.” (That guy should be banned from all concerts.) People pay to hear the hits, and McCartney — who has made more of them than anyone else — can also deliver them live, which is why he’s still one of the hottest (and priciest) tickets around at age 71. (“I’d do this for nothing,” McCartney said recently. What he didn’t say: He probably prefers to do it for $3.6 million per show.) The fact that you don’t need to have listened to music made since the mid-’70s to sing along to every song (and that there is no great time to get up and grab a beer) is what makes a McCartney concert great. It doesn’t hurt that his band sounds a lot like The Beatles, he hasn’t put on any weight and, suspiciously, he still has the same haircut and hair color he had in the ’70s. If you’re sitting far enough away, you can almost convince yourself that the rest of the audience hasn’t aged since before he had to dye it.

Still, it’s sort of a shame that McCartney doesn’t get to dig deeper into his catalog in concert. Unlike a lot of legacy acts — McCartney admirer Billy Joel, for instance, who plays old songs because they’re the only ones he has — McCartney has never stopped making music. More importantly, much of that music is good, and if you haven’t strayed far from the hits, you might not have heard it.

On Tuesday, McCartney released New, his 21st album of all-original rock songs since the Beatles broke up, and the latest in a series of sometimes inspired, always well-crafted late-career records. With his first collection of entirely new material in five years on sale and much of his solo catalog in the midst of being remastered, now is a good time to dive into the deep tracks that deserve to be heard after your appetite for the same old McCartney mega-hits is exhausted. Even McCartney could use a refresher. “There’s a huge period in the ’70s — I couldn’t tell you what was on the albums then,” he told NME earlier this month. “There are some tracks there. I’ve seen track listings and thought, ‘I wonder what that one’s like?'” We’re here to help.

“Deep tracks” is a relative term when it comes to the world’s best-selling songwriter, but we’ll do the best we can to stay semi-obscure by excluding Beatles songs, singles, and anything that charted, was included on a best-selling career compilation, or has been trotted out often on tour. And in honor of New, we’ll make this a career-spanning top 21 list.

The kind of catchy, unpolished sing-along song McCartney pumped out effortlessly in the first few years after the Beatles’ breakup, when — aside from not having his old band backing him — he was still at the height of his powers. Easy to dismiss as lightweight, but tough to forget.

McCartney rushed to be the first Beatle to release a record after Let It Be (Ringo Starr beat him to it), so his first solo album is full of unfinished ideas that could have been better had they been given more time to grow. This is one of the finished ones, though it still consists of only two repeated lines. Milking almost three minutes out of “That would be something / To meet you in the falling rain” is one of McCartney’s more impressive feats.

This is one of the highlights of an ill-conceived soundtrack album that consists mostly of inferior covers of previously released McCartney songs and approximately 18 versions of “No More Lonely Nights.” Aside from Starr’s sweet aviators, you can safely ignore the music video, as well as the rest of the incomprehensible Magical Mystery Tour–esque movie.

A composition McCartney said reminded him more of George Harrison’s style than his own, it’s more melancholy than it sounds on first listen.

Written for Starr’s children after the death of his ex-wife Maureen, “Little Willow” manages to tread the line between sentimental and mawkish. McCartney’s voice doesn’t sound strained, as it has on occasion in recent years, and except for a few ELO-esque backing vocals during the Beach Boys–y bridge, you’d never know it was produced by Jeff Lynne.

McCartney, a Marvel fan, constructed a song around comic book characters — and even commissioned original artwork by Jack Kirby to display on stage — years before people started to make movies about them. It’s as goofy as he gets, but it still makes more sense than Batman & Robin. Even if you don’t like the lyrics, the organ groove and the harmonies make it worthwhile.

A mashup of at least four melodies, each of which has a hook strong enough to carry a lesser song. The climax at 2:10 is a classic McCartney moment.

A relentless 10-minute jam like nothing else in the McCartney catalog. Backward guitar, primal screams, and tempo changes serve as the backdrop to one of post-prime McCartney’s best vocals. It gets wild and weird without being boring. Makes “Helter Skelter” sound tame.

Straight out of the retro “Honey Pie”/“When I’m Sixty-Four”/“Your Mother Should Know”/“You Gave Me the Answer”/“Baby’s Request” playbook, but with an uplifting, more modern-sounding middle eight that sets it apart from the pack.

It’s not the best song by this name, but it’s one of the best cuts on London Town, a collection of strong songs whose reputation suffers somewhat from their slick production. There are too many lead guitar tracks to count, most of them phased or sustained, and McCartney starts out singing in an unusually low register before switching to falsetto. It will both bring you down and leave your toe tapping.

Given how much marijuana McCartney was smoking at the time, “I’m Carrying” sounds like the title of an ode to his stash, but — surprise! — it’s just another love song. The overdubbed strings are understated enough not to be cloying, and the melody is as sweet as anything in his songbook.

Recorded by Wings during the Red Rose Speedway sessions, this bright, finger-picked earworm with a dreamy vocal was available only on bootlegs until finally receiving an official release in 1990.

The message is muddled, with words plucked out of a write-by-numbers psychedelic starter kit. (Eggshell seas!) All in all, it might be better if it were hummed instead of sung, but the song is so pretty that it doesn’t matter that the lyrics are on the level of “Naaaature! Goulet.”

McCartney has collaborated on three albums with producer Youth under the pseudonym “The Fireman.” The first two are instrumental electronica, but the most recent, Electric Arguments, adds vocals and sounds more like a regular McCartney record, albeit more improvised and experimental. The five-minute first track, on which Paul plays all the instruments and growls about betrayal, sounds like an attack on ex-wife Heather Mills, though McCartney insists it was inspired by the same guy who said “Ob-la-di, ob-la-da.” One of the few Macca tracks that makes people say, “Sounds like Led Zeppelin.”

A soaring, triumphant, and mercifully synth-less song that sounds epic if you pretend it’s about something more significant than Macca wanting to be left alone while he lights up.

You have to like (or at least live with) Linda McCartney’s vocals to enjoy most of the music from this period, and this song is no exception. If you’re not bothered by the dual lead, you’ll dig the rest: a tender tune with some roughness around the edges and none of the schmaltz that mars some of McCartney’s more famous ballads.

McCartney’s reaction to the criticism that his ’70s output was sullied by sappy (but incredibly catchy) pop pablum was to double down with “Silly Love Songs,” a faux-protest song with a cute and cuddly cause. “Beware My Love,” a harder-rocking song from the same album, was a more convincing response. It’s a love song that makes you want to stay single.

Clever, memorable nonsense lyrics sung in McCartney’s best “Why Don’t We Do It in the Road?” voice. It takes only two or three listens before you’re belting out “WELL, I KNOW MY BANANA IS OLDER THAN THE REST.”

McCartney medleys didn’t end with Abbey Road. This one, a sweeping ballad that wouldn’t have sounded out of place on the Beatles’ last album, links two love songs about a couple (or couples) at the beginning and end of their time together. It evokes some actual emotion, unlike some equally tuneful but slightly superficial efforts.

John Lennon disparaged what he felt was a forgettable A-side to this track in his McCartney put-down “How Do You Sleep?” singing, “And since you’re gone you’re just Another Day.” He might’ve liked the B-side better. But be warned: Singing along can be hazardous to your health. As far as I can tell, McCartney has never performed this song live, which might be because he couldn’t sing it more than once without doing irreparable damage to his vocal cords.

A mini-medley from what might be McCartney’s most Beatle-esque album. Originally intended for an animated children’s movie that wasn’t made until the ’80s, the lyrics are simple (with lots of “la la las”) but still convey a sense of loss. (Like every other McCartney song released in the early ’70s, this one was linked to Lennon, which was a stretch.) Jangly guitars, warm production, and plenty of texture. If you want to know whether Wings is for you, start here.

McCartney didn’t stop making Beatles-caliber music when his first band broke up. If you can find the time to take in 20-plus albums, you’ll discover that his solo catalog has more to offer than most, even with its best songs tied behind its back. The more classics an artist has produced, the more people are inclined to yada yada yada the rest of their material — but the better their B-sides are.

If one of your favorites isn’t on here, it’s probably because it didn’t meet all the criteria for inclusion. But it might be because I overlooked it or couldn’t cram it in, in which case you should leave a comment and let me know. After all, omission from a deep tracks list is the ultimate snub.

Filed Under: Paul Mccartney, The Beatles