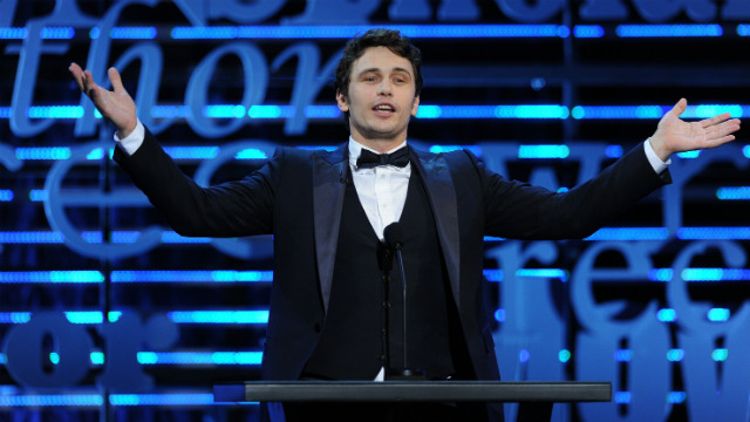 At the will-call table outside the taping of the James Franco roast, I’m handed a manila envelope with my name and affiliation written on it in Sharpie. Inside that envelope, there’s a smaller black envelope, and inside the black envelope there’s a thicker envelope of glossy white card stock, held together with tabs, like the little document pouch that comes with a new iPhone. The word FRANCO has been die-cut into the top flap, with scorched edges, as if from a brand or a wood-burning kit. Inside this envelope, there is the actual ticket to the James Franco roast, and a pass to the after-party on a little chain, and underneath that, printed on the inside of the last envelope, there is a picture of James Franco making a sexy face. He has a little mustache in the picture. It’s kind of the first James Franco joke of the night. Although I guess the truly Francoesque envelope would be a series of envelopes within envelopes within envelopes. Each one would be (deceptively) transparent, but no matter how many you opened, there would always be another layer between you and James Franco and his little mustache.

Comedy Central began televising the Friars Club’s annual roasts — by then a 50-year-old, largely-if-not-always-entirely-private showbiz institution — back in 1998. It cut ties with the Friars in 2003. Since then it’s pretty much bred all the old vaudevillian DNA out of the format, reimagining the celebrity roast as a kind of TMZ-era dunk tank, at which the famousest persons available (Snoop Dogg, the Situation) gather alongside professional insult comics to sling theoretically outrageous zingers at attention-vampiric junk-media omnipresences like Donald Trump, David Hasselhoff, and Charlie Sheen. Franco is the 13th person Comedy Central has roasted since breaking with the Friars, if you count Trump as a person. But he’s the first-ever actual movie star. And the network is treating this like the not-unimportant franchise milestone that it is. The Lisa Lampanellis and Anthony Jeselniks of the world have been banished from the dais, in favor of a young-comedy Rat Pack made up largely of Franco’s actual peers and bro-laborators — roastmaster Seth Rogen, Jonah Hill, Sarah Silverman, ex-SNL-ers Bill Hader and Andy Samberg, Aziz Ansari, and Nick Kroll, with Natasha Leggero as the token relatively unknown comic, and Friars Club Roastmaster General and 11-time Comedy Central roast vet Jeffrey Ross batting cleanup. Ross showed up dressed as Alien from Spring Breakers, complete with cornrows, gold grill and four female companions in pink balaclavas.

So right away it’s a classier affair, albeit one where the vulgarity flies so furiously that Silverman’s joke about the dais resembling “the line to suck Judd Apatow’s balls” registers as contextually genteel. I forget what Charlie Sheen and his roasters stood in front of, but I’m positive it wasn’t a word-cloud backdrop celebrating the guest of honor’s multihyphened achievements as a STUDENT and SCREENWRITER and MOVIE STAR and DIRECTOR and WRITER and ACTOR and PROFESSOR and SCHOLAR and AUTHOR. And sure, “scholar” and “student” should probably not count as two things, but that doesn’t matter. “Actor” is not the same thing as “movie star,” and it’s in the up-for-grabs space between those two job titles that Franco lives and works and paints and writes fiction that is either “promising” or “amazingly underwhelming” and reenacts the making of William Friedkin’s Cruising and assembles multimedia installations and carves the name of his deceased Deuce’s Wild costar Brad Renfro into his arm in the name of performance art. During his turn at the podium, Jonah Hill invokes the old actor’s maxim One for them, one for me, then says, “James has a different policy — five for them, one for nobody.” Which is both funny and Francologically insightful, although the ratio’s probably wrong, and the binary leaves out weird experiments like his Oscar-hosting gig, a giant one-for-them he managed to turn into a one-for-nobody. A Ross joke I don’t expect will make the telecast: “Face it, Franco, you and Anne Hathaway had the comedic chemistry of Trayvon Martin and George Zimmerman.”

A celebrity roast is all about reducing a famous person to the two or three things everyone knows about them, then generating zingers based on those premises. The problem with roasting someone like Franco is that his signature traits aren’t really all that shameful. It’s hard to make fun of someone for being really handsome and pursuing postgraduate education as a hobby. So there were Oscar jokes, and squinty-eyes/dumb-face jokes. And there were gay jokes. There were a lot of gay jokes. I stopped counting after a while; the dedicated BuzzFeed correspondent across the table from me tallied 26. It felt more like 326. I don’t actually think Franco’s gay, although I agree with Nick Kroll, who said he could see Franco turning gay “for like a year, as an art installation.” But if he ever surprises us by popping out of the closet for real, his good-natured endurance of this roast will retroactively go down as the boldest feat of letter-purloining in the history of celebrity sexuality. Franco’s possible/probable gayness was the one well no one could resist returning to.

“James became famous for playing James Dean,” Rogen said, “which makes sense because they both sucked some dicks and made three good movies.”

“He’s like our generation’s Johnny Depp, if Johnny Depp was a terrible actor and blew guys,” Jonah Hill said.

“I want to please you,” Leggero said. “I just want to take you back to my hotel room, take off all your clothes, and let a man fuck you.” She paused for laughter. “No, I’ll fuck you — I just want to put a bag over your career choices first.”

From a qualitative standpoint, these are all finely crafted James Franco–sucks-dick jokes. I laughed. Franco seemed to be laughing, too, in the sense that his eyes were closed and his teeth were bared and his head was cocked to the side. But none of the jokes really felt like body blows. Maybe James Franco has rendered himself unroastable. He treats his entire career like a vast conceptual-art project, so you can’t really mock him for making movies that fare poorly at the box office, and he’s been so willing to explore sexual fluidity onscreen that it’s hard to imagine him taking the gay stuff personally. It was easier to imagine him making mental notes for a future performance piece called ROAST/ROACH, an adaptation of Kafka’s Metamorphosis incorporating dance, pig blood, and giant floating Nick Kroll heads. Appropriately, when Franco finally got up and took over the podium, he announced, “The joke’s on all of you. This is not a roast. This is my greatest, most elaborate art installation ever. I’m not the real guest of honor, these aren’t real comedians, and we’re not even on a real network. What you’ve seen tonight was my brilliant opus to sequester an artistic visionary and subject him to the mindless incoherent trashings of talentless abnormalities. I call it Genius Unscathed, and this is my masterpiece.” Then he spray-painted “FRANCO, BITCHES” on the lectern.

It might have been the night’s greatest performance, except that Franco was following Jeff Ross. I don’t know how it’ll play on the telecast, but watching Jeff Ross roast live was like seeing Eric Clapton stroll into a Guitar Center and start playing “Layla.” He began by one-upping Silverman’s Apatow’s-balls joke from earlier, commending Franco and his buddies on playing themselves so convincingly in This Is the End. “How did you guys get into character on set?” he asked. “Did they pass out smoothies that taste like Judd Apatow’s asshole?” It got rougher from there. On Jonah Hill: “When Jonah heard that Quentin Tarantino wanted him to be in his spaghetti Western, he said ‘You had me at spaghetti.'” On Sarah Silverman, who’s gotten into trouble by joking about abortion: “Maybe your initials are S.S. because you’ve killed more baby Jews than the Nazis.” On Franco’s grandma, who was near the front row: “127 hours is how long she has left.” On Stephen Merchant, whom Ross spotted while looking for Franco’s grandma, and who was also, oddly, near the front row: “Are you saving a seat for Ricky Gervais?” He called Franco “Johnny Depp with lupus” and a disgrace to Italian American actors. “James Gandolfini must be trying to roll over in his grave,” he said, to a chorus of boos.

You could tell he wanted the boos, that it was somehow his responsibility as a professional roaster to actually lay a glove on Franco. It’s hard to say if he did. Maybe it’s impossible. But he closed with a sign-off worthy of Don Rickles himself: “You truly are a Renaissance man. I hope you die of black plague.”