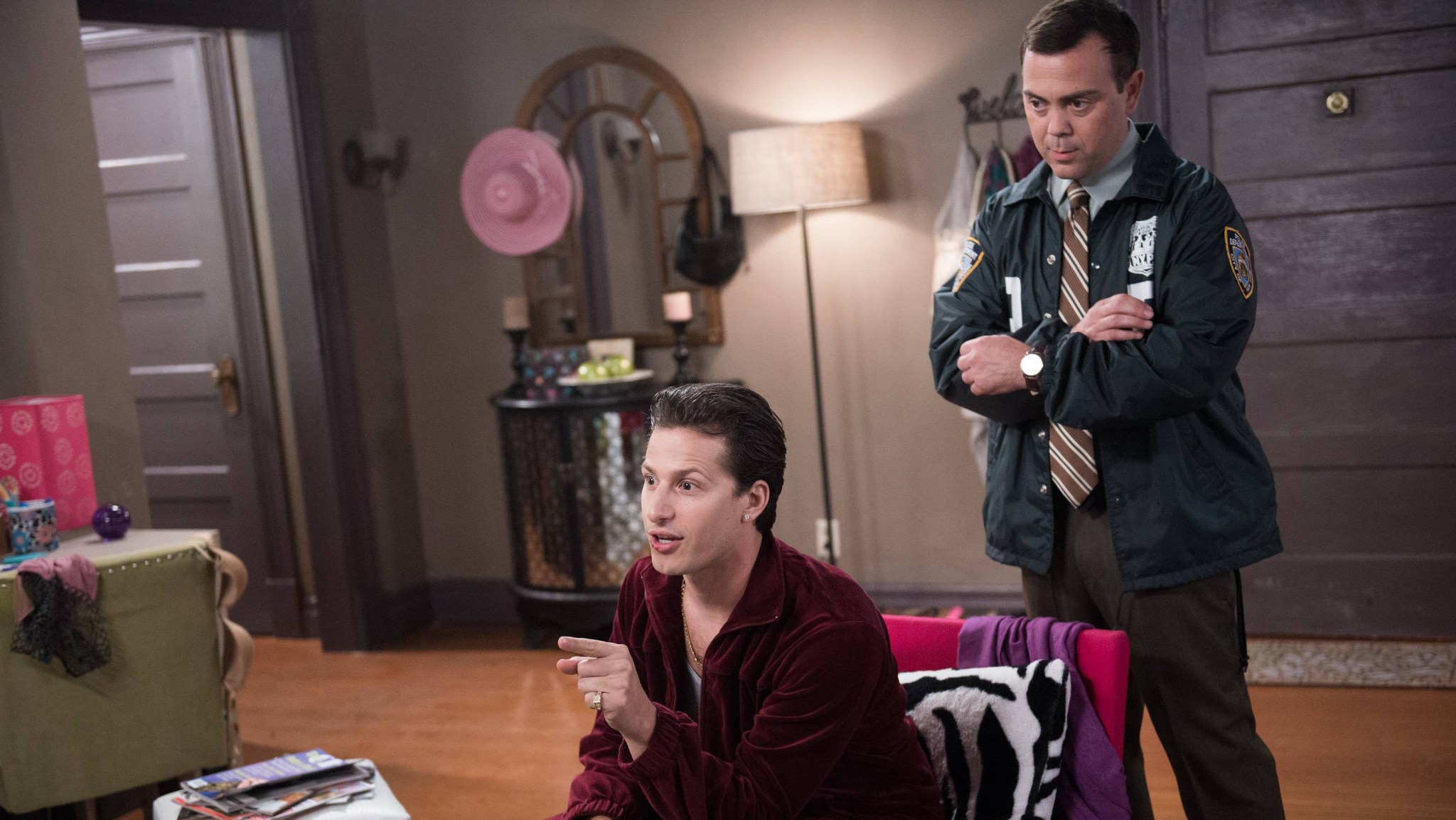 Brooklyn Nine-Nine is a fine show threatening to become a quite good one. After debuting last fall with an unusually strong pilot, the first season fell prey to the usual freshman comedy fumbles: an inconsistent tone, an un-jelled cast, a desire to sprint before learning how to walk. Yet even at the show’s lowest points, the vision cocreators Dan Goor and Michael Schur had for Brooklyn was always evident. Like Schur’s long-running Parks and Recreation, Brooklyn aspired to be a warmhearted workplace comedy filled with lovable misfits who can barely function on their own and yet, inexplicably, manage to work well together. Of course, as anyone who sat through the earliest episodes of Parks can tell you, audiences have to learn to like misfits before falling for them completely. It’s the difficult paradox built into nearly any sitcom: We want even brand-new characters to feel like old friends. We demand a coziness that often takes years to cultivate.

No show really gets that time anymore, especially in the killing fields of network TV. A sitcom’s second season could easily be its last. And so it was a relief to see Brooklyn Nine-Nine return last night with a swagger that belied its age. Like a savvy veteran, the show now knows how to play to its strengths and, perhaps more crucially, how to turn its weaknesses into positives. Case in point: Star Andy Samberg, like his character, Detective Jake Peralta, is a singular talent who struggles mightily when asked to play with others. Immersing him in a Donnie Brasco–esque undercover plot allowed Samberg to engage in all the high-test silliness he prefers — kissing old men on the mouth, dressing like a refugee from a 1980s Cavaricci commercial — but with the added benefit of a purpose. Similarly, Brooklyn took the smart step of pairing off its most extreme personalities, Chelsea Peretti’s hot mess Gina and Joe Lo Truglio’s warm mush Boyle. (It’s the wise comedy showrunner who recognizes the difference between circus and sideshow.) I’m a big fan of Melissa Fumero’s sweetly normcore Santiago; pushing her up against Stephanie Beatriz’s opaque Diaz and Terry Crews’s increasingly manic Terry led to the episode’s best moments, both of which involved the surprise destruction of a toy house. (One was made of Legos. One was a bouncy castle that deflated all around a terrified, claustrophobic Amy.) And though I still feel like watching the great Andre Braugher on this show is akin to seeing Michael Phelps doing laps in a kiddie pool, his Captain Ray Holt is an undeniably funny straight man. I’ll never hear the words “a collection of antique globes” the same way again.

Brooklyn’s energy remains a work in progress. There’s still something slightly jarring about police incompetence being played for laughs and good cheer, particularly in a year like 2014. Workplace comedies work best when the mood is purely positive (Parks and Rec) or existentially negative (The Office). With its endless stream of cartoony perps and low-level misdemeanors — mobsters and taggers are just two strands in the same very broad brush — Brooklyn packs heat but often seems content to fire blanks. I’m not asking for The Wire, but a little Hooperman would go a long way. Though the gradually warming flirtation between Peralta and Santiago may have been salvaged from the dustiest shelf in the evidence room, it’s actually the story I’m most invested in, if only because it helps ground Brooklyn in an actual place and with genuine emotions. The show is unquestionably entertaining with a strong cast and a sneaky-great stable of writers, including vets of Parks, Happy Endings, and 30 Rock. But I can’t help but think there’s potential for it to be something more.

Whether that’s a goal the network shares is another story entirely. On paper, Brooklyn Nine-Nine would appear to be a priority for Fox. The show has a bright cast, good buzz, and a pair of surprise Golden Globe wins from earlier in the year. And yet for its second season, Brooklyn has been airlifted out of its cozy Tuesday home and dumped on Sunday nights in the middle of Fox’s long-standing animation block. This paid off last night, but the surprisingly robust numbers were almost definitely a product of being sandwiched between two event episodes. (There was a death on The Simpsons at 8 p.m. and then a greater death inside of my soul at 9 when The Simpsons allowed itself to be crossed over with Family Guy.) In a perfect world, Brooklyn Nine-Nine would be a source of potential and strength for Fox, a vital cog in a network-wide reinvention. But if there was a perfect world, Fox wouldn’t be within spitting distance of it. The 2014-15 TV season is only a few weeks old, but it’s already a catastrophe for Fox, with new shows like Utopia and Red Band Society flatlining and established series New Girl and The Mindy Project trending straight down. Later this week, Fox will debut Gracepoint, a weak, karaoke version of British hit Broadchurch, and Mulaney, a rough sitcom starring very funny people that, as of yet, is no laughing matter. Neither is likely to move the needle. American Idol, the annual shot of adrenaline that was able to resuscitate Fox in past down years, is a shell of its former self.  (The lone bright spot? The pitch-black, not-bad-at-all Gotham.)

It’s now becoming more clear why Fox felt the need to fire Kevin Reilly, its visionary programming chief, after giving him the chance to unveil this fall slate. In business terms, focusing on the future while the present crumbles all around you doesn’t make you a prophet. It makes you Nero. A slowly improving, engaging sitcom like Brooklyn Nine-Nine is the sort of thing that can buttress an empire, not establish one. Its value becomes even more questionable when one considers that Brooklyn, like Mindy and Mulaney, hails from NBCUniversal Studios. New Fox network bosses Dana Walden and Gary Newman are also the heads of Fox’s in-house studio. You don’t need to be a detective to spot the brewing conflict. Treading water can be fine, and even profitable if a network owns its programming. It makes much less sense when you’re leasing the water from someone else’s Jacuzzi. Fox needed Brooklyn Nine-Nine to be a big splash. Here’s hoping it can make peace with a comfortable, enjoyable soak.