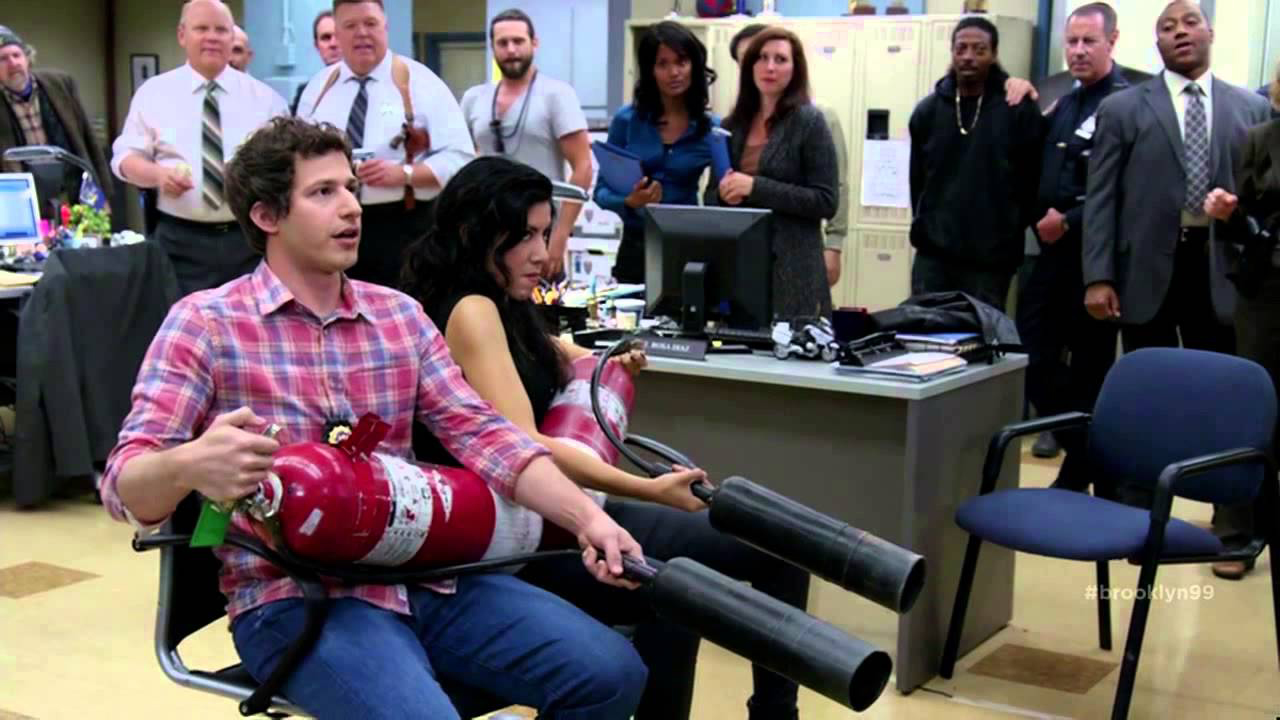 Brooklyn Nine-Nine is one of the best sitcoms on TV, in spite of (or maybe because of) also being one of the most old-fashioned. Where most of the more critically acclaimed half-hour series are either experimental (The Comeback), dramedies (Getting On), or both (Transparent), Brooklyn Nine-Nine is pretty much the most straightforward workplace sitcom imaginable: The cops of Brooklyn’s 99th precinct occasionally butt heads, but they manage to form an endearing, comical surrogate family, because that’s what happens on these kinds of shows. Like cocreators Mike Schur and Dan Goor’s other series, Parks and Recreation, all the characters basically like each other and are genuinely supportive. (It helps that both shows find a near-endless stream of outside conflict in the drudgery of local government and, uh, crime.) As Goor puts it, “Our characters tell jokes and are comedic characters put into comic situations in a classical way.”

The show’s relative simplicity also extends beyond the characters to its visual gags, which delightfully eschew complexity in favor of just putting some funny stuff onscreen — pies, Chelsea Peretti coordinating a dance crew called Floorgasm, Terry Crews fixing a dollhouse/doing anything. In particular, no other sitcom has gotten this much comic mileage out of fire extinguishers. The emergency measures of the Nine-Nine are almost never used to put out real fires, but they still come into play frequently enough to call into question where the building’s sprinklers are. Goor protests — “we’re conscious of trying not to use them too much” — but he admits they’re the rare object that’s both “explosive and funny.” You might not have any idea of how many creative uses of fire extinguishers exist, but here they are, as explained by the cops (and cocreator) of Brooklyn Nine-Nine:

The show’s conflict is between Andy Samberg’s slovenly Jake Peralta and Andre Braugher’s uptight, by-the-book Captain Ray Holt. In a flashback scene, from Brooklyn’s pilot, we see that Peralta is a great cop with no regard for procedure, taking advantage of the lax previous captain, McGinley — a man so checked-out on the job that when he walks into the bullpen and sees Peralta and his colleague, Rosa, having a “fire extinguisher roller-chair derby,” he merely nods grimly. “OK,” he says with an air of world-weary tragedy, knowing in his heart of hearts that he’s not long for the show.

The original inspiration for the derby came from one of Goor’s college physics classes — maybe. “I swear to God, the guy did that, but then all the research we did afterwards suggested that was impossible.” The physics demonstration may have entered into the realm of pure myth, since the Brooklyn Nine-Nine effects team was unable to create the roller derby without resorting to wires. Sorry, kids trying to do this at home.

When the captain and Sergeant Terry Jeffords tinker with the organization of the office in order to increase efficiency, they attempt to swap the detectives’ seats so Rosa will deter people from using the bathroom. But confronted with a seemingly dysfunctional monitor, Rosa smashes her computer with her bare hands before using a fire extinguisher to finish the job. Later in the episode, Boyle is set on fire as part of Terry and Holt’s efforts to reorganize the office, but the extinguisher is empty. Comedy!

And Holt’s reign isn’t the end of the detectives using the office as a playground. The precinct Olympics (also known as the Jimmy Jab Games) culminates in a race through a series of arbitrary obstacles, including printing out a photo of Gina from a ridiculously old computer. It seems like the obstacle course is going smoothly, but there’s a twist: When Jake and Amy try to make it to the finish line, the fire extinguishers go off, dousing the competitors in foam. According to Goor, this one was, at least, easier to pull off than the roller derby — “I’m told that was somewhat realistic.”

In “Lockdown,” Holt leaves Peralta in charge, with one directive: “Just don’t burn the place down.” It’s only a matter of time until the flames consume the precinct. Someone sets Hitchcock’s nap couch on fire, and the extinguishers are finally used for their intended purpose. It took only 29 episodes of the show and multiple threats of fire to get there. Goor points out that the extinguishing is not done by a member of the squad. “We can still believe that none of them actually know how to use a fire extinguisher.”

This is a series of very deep lightness. Brooklyn Nine-Nine might not be a ratings smash, but it’s a decently successful, award-winning, non–Big Bang Theory sitcom in its second season, and that in itself is a minor miracle. Though it has some 30 Rock in its DNA (what series doesn’t, these days?), Brooklyn Nine-Nine has achieved that success more by being a deliberate throwback to Cheers, Beverly Hills Cop, and Barney Miller. In that respect, the show joins the current season of New Girl in rejecting what Andy Greenwald characterized as the “treadmill” of serialization, a trend that forces increasing escalation as a series continues.

This conscious deflation has certainly helped Brooklyn Nine-Nine effectively blend its more procedural and action-oriented cop show elements with the comedic demands of being a sitcom. The show aims for tense, but primarily does so in fights where, Goor says, “the two characters are giving it their all, but by doing it it’s comical.” Brooklyn Nine-Nine’s version of a serial killer — Jake’s white whale — is a smooth-talking serial Pontiac thief played by Craig Robinson, who just might be Jake’s soul mate. Though there are running stories — the giggle pig task force, or Holt’s War On Wuntch — they’re mostly joke machines, skeletons on which to hang standard sitcom plots, or excuses for Kyra Sedgwick to be funny.

The closest thing Brooklyn Nine-Nine has to a series-long arc — Jake and Amy’s relationship — is still played for laughs. Most sitcoms start out with explicit will-they-or-won’t-they pairings and throw arbitrary obstacles in the way of the couples’ happiness, before finally giving in (see also: Ben and Leslie on Parks and Rec, which feinted at keeping them apart before leaning into how they are good together). If this season is any indication, Brooklyn Nine-Nine is going to use Jake and Amy’s sexual tension as a joke instead of a plot device. In the beginning of the season, Jake was into Amy, who had a boyfriend. But the situation is now reversed. It has become another thing that Jake can tease Amy about, rather than a game-changer for the series. It’s a good thing, too — changing the game requires a whole new set of rules.

Jake and Amy’s gentle nudging has helped refresh Brooklyn Nine-Nine’s take on a tired trope, to the point where the writers almost broke an episode entirely based on Amy mocking Jake, but abandoned the idea because, Goor says, it “just felt kind of mean.” Instead, Goor and Schur’s approach “is to keep it as realistic as possible. We’re conscious of the fact that they’re both adults. So one of the things we’ve happened into is that they talk about their relationship.” Given how much of a classic sitcom Brooklyn Nine-Nine is, it’s remarkable how modern the Jake-Amy relationship feels. 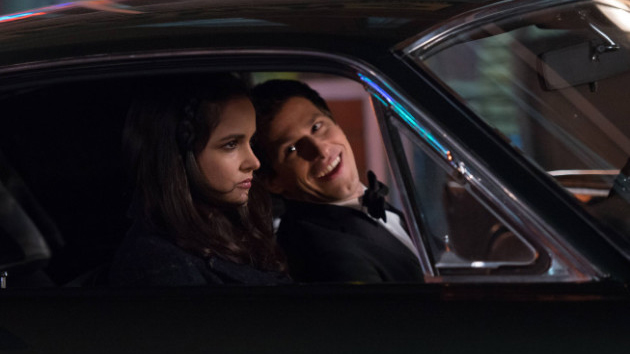 As noted above, Brooklyn Nine-Nine has rejected the classic serial treadmill device of escalating stakes, and the resulting show might be even more lighthearted than the later seasons of Cheers. Rather than kindling the flames between Jake and Amy (a crime of which practically every bad sitcom would be guilty), Brooklyn Nine-Nine has, uh, comically doused them. Cops are serious business (something Law & Order and the like are fond of beating us over the head with), but sitcoms aren’t, and Brooklyn Nine-Nine has chosen to be a sitcom that happens to be about cops rather than a cop show that happens to be funny. And in a year when new sitcoms increasingly feel like romantic comedies that are heavier on the romance than the comedy, Brooklyn Nine-Nine has turned its strongest possible pairing into a big joke. The act of being a throwback gives the show a sense of real freedom, and it gives Jake, Holt, Diaz, and Terry the freedom to do whatever the hell they want with their fire extinguishers.