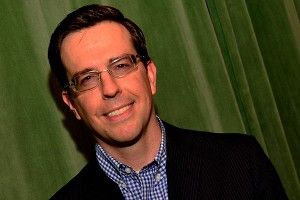 Rusty Griswold is all grown-up. Ed Helms is in talks with New Line to star in a new installment of the Vacation franchise as the son of Clark Griswold, now an adult with a family of his own. For all of you blissfully ignorant young people: Chevy Chase originally played Griswold patriarch Clark, who dragged his poor family around the world on crappy slapstick vacations over the course of the original film, Vacation, followed by European Vacation, Christmas Vacation, and Vegas Vacation. (Don’t believe the masses; Vegas had some moments. Wayne Newton? Ethan Embry?! And Randy Quaid straight killed it.) No word on where this new Vacation will be set, although Horrible Bosses writers John Francis Daley, a.k.a. (as it should be pointed out for at least the next five years of his successful adult career) Sam Weir from Freaks & Geeks, and Jonathan Goldstein are whipping up the screenplay now.

Congrats to Ed Helms, who’s made a lot of money for a lot of people over the course of two Hangovers and so should get to star in as many high-profile, big-budget studio comedies as he pleases. And congrats as well to Hollywood, for continuing to think independently by refusing to be swayed by the fact that everyone makes fun of it for not having any original ideas. Live your life, Hollywood! But just one question here: Won’t things get a little dark for this next generation of Griswolds, as Rusty takes his kids on all-new crappy slapstick vacations? Won’t Rusty’s wife, certainly having heard, again and again, the tales of how Rusty’s dad would epically mess up while traveling, come to bitterly resent her husband’s inability to avoid the mistakes of his father? Won’t it all feel depressingly fatalistic? Ah, well … have fun on your trip, new Griswolds.

Katie Holmes's Plot to Escape Scientology ... and Other Thrilling Tales From This Week's Tabloids