Dropping the Bass: A Night With Skrillex 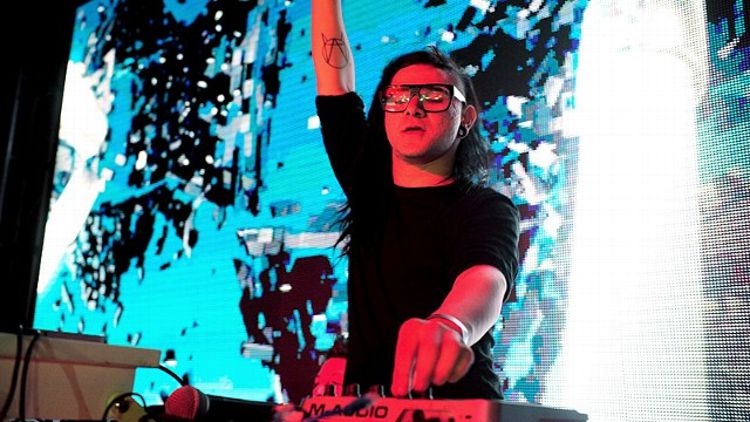 A few basic facts crucial to any “what is this Skrillex kid all about” reportage: His trademark look is shoulder-length hair with one side of his head shaved, plus a pair of what are basically Rivers Cuomo glasses; his real name is Sonny Moore, and he played in a screamo band called From First to Last before going solo and electronic; and he is the most commercially successful, and to some people most sacrilegious, U.S. importer of dubstep, a dance-music subgenre born in London clubs a decade ago. Also important: according to Kanye, Benny Benassi’s “’CINEMA (Skillex [sic] Remix)’ is one of the greatest works of art ever made.”

You can hear that song here. It starts off slow and pretty and about a minute and 20 seconds in a robot voice says, “Drop the bass,” and everything goes all “modem Internet dial-up noise as re-created by an army of extraterrestrial choral singers.” That, to my knowledge, is what most Skrillex songs sound like. That psychotically heavy “dropping the bass” squelching bit is integral to the Skrillex experience, which is why some dubstep purists dismiss him as overly aggressive. The derogatory term of choice is “brostep,” which is pretty hilarious. (Vaguely related, also hilarious: this Tumblr of Kim Jong-Il dropping the bass with various DJs.) Meaning: You don’t actually have to go to a Skrillex show to guess as to why high school kids like him. His music is massive and reckless, and it’s great for late-night drug-addled dance flailing.

But it’s one thing to stodgily respect youthful decision making and another to actually sign off on it. Last night I entered the crucible of Skrillex, trying to — hoping to! — come out a convert. To that end, I brought along my 23-year-old brother, whose proximity to fresh-faced juvenility was a needed asset. The first thing he asked me after agreeing to come was which side of my head I was going to shave, and how much MDMA he should bring. (For the record, we did neither.) Later we found a Yahoo! Answers page titled “Would I die at a Skrillex concert?” (For the record, we did not die.)

When we walk in, at around 12:30 a.m., opening DJ A.C. Slater is still on. He seems to be doing a pretty good job of dropping the bass, to my ears, although his biggest cheers come when he samples Drake. I see a girl in Lady Gaga-style ripped black tights, studded heels, and a bowler hat. I see a guy in a battery-operated T-shirt that’s flashing a neon boombox. I see another girl in bumble-bee tights, a tutu, and a sports bra. For the most part, I see people who are really into not having sleeves.

A girl comes up to us, explains she’s from Brazil, and that she’s just lost her friends, but she’s the only one that speaks English so they’re screwed. She says they’re gonna do a lot of “yayo” later. She asks us if we’re doing “mad addies.” My brother shakes his plastic cup at her, says he’s sticking to whiskey. She yells out, “Old school!” then takes off. We talk to an Italian girl with a heavy accent who’s studying at Columbia, and she complains that the club isn’t big enough; when she saw Skrillex in the motherland, he played until 7 in the morning and there was enough room for her to jump. She demonstrates her jump. Then I go to check my bag, and accidentally walk through two people doing that thing where you have glow-in-the-dark finger attachments and you move your hands rhythmically and in sync while intensely staring into each other’s eyes.

And then Skrillex comes out, and shit. Gets. Real. Dressed in all black and puffing a cigarette, the dude starts twiddling and tweaking furiously, and I almost immediately castigate myself for ever thinking A.C. Slater knew how to drop the bass. There are girls on guys’ shoulders in their bras, and other girls in mini-shorts whipping their shirts off to join them. The kids are climbing on every available surface to shimmy and have commandeered the low speaker stacks and the side bleachers. One girl has an inflatable pirate sword.

We wade into the middle to see what the action’s like. Some bros are trying to shove around to start a mosh pit, but mostly it’s like that Italian girl showed us: people jumping, up and down, while grinning. Skrillex is hopping up and down too, sometimes with both arms in the air, sometimes just focusing on flipping his hair around in a cinematic fashion. Every once in a while he says stuff like, “You never cease to amaze me!” and, “New York, what’s going on?!” and, “Let’s rock!” but for the most part he’s locked in on twisting his knobs, which he does with brawn and focus. He also has a hip-hop-crew-style assemblage behind him. At first I’m concentrated on whether or not he’s actually doing anything up there, but I forget about that fairly quickly. One girl runs through the crowd and screams, “OH MY GOD I JUST CAME IN MY PANTS.” I take out my phone to write this down, and she yells at me, good naturedly: “THIS IS SKRILLEX. STOP TEXTING.” A large fellow is letting people know that, if they want, they can jump on his back.

I take a lap around the outside perimeter and am impressed: Every single person, it seems like, is dancing. There are clusters of pals in the back making their own dance floor, pairs of girls tucked away by the bar not even looking at the stage, and, of course, guys scrunching their eyes shut and going it alone. One guy’s wearing a Whiskeytown shirt and I am too shocked to not talk to him: “You like Ryan Adams’ pensive, gorgeous, pre-solo country band and Skrillex?!” He’s either too drunk or too bored with what I’m saying to respond. Later, I realize his shirt is in fact advertising the Whiskeytown bar on East Third Street.

When we leave, around 3 a.m., the kids are still going. One girl’s moves are particularly impressive, seeing as she’s in a leg cast and crutches. You came to Skrillex with a broken leg, I ask her?

Impressive, I say. She finishes whipping her head to the latest bass drop, then answers.

Filed Under: Live Music, Music, Skrillex, We Went there