Does J. Cole Have a Jay-Z Problem? 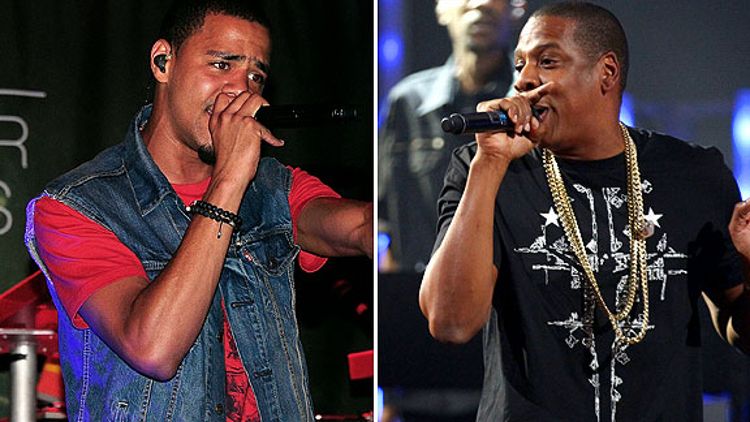 Two years ago this month, Jay-Z released The Blueprint 3, and officially introduced the world to J. Cole. The New York-via-North Carolina rapper was the first artist signed to Jay’s label, Roc Nation, and he landed a plum spot on a track called “A Star Is Born.” Over its first two verses, Jay rattled off the names of other artists who achieved success during his career; he left the third verse to his protégé. The message wasn’t exactly subtle, and Cole has spent the time since dutifully working toward that prophesied stardom. His qualifications for the gig are many: unassailable rap chops, foremost, but also a radio-friendly sound, the support of influential hip-hop blogs and DJs, high-profile collaborations with established artists, an easy grace with the media, smarts, photogenicity, tallness. But with his debut album Cole World: The Sideline Story in stores this week, his mass breakthrough is still proving elusive. Has Cole failed to deliver on the potential of a Jay-Z co-sign? Or is it possible that the Jay-Z co-sign — dun dun dun! — is the problem?

Jay’s mentorship has evolved since the late nineties, when he launched the extended Roc-A-Fella family. At the time, guys like gully Philly rappers Freeway and Beanie Sigel had well-defined roles as ruthless street-level operatives of the Hova empire. He dramatically extended their commercial reach and, under his guidance, they put out classic albums. But they were never meant to eclipse him, and their careers predictably floundered after they left the Roc. Meanwhile, Memphis Bleek has remained in the fold and has become a punchline for his unflagging loyalty.

J. Cole, though, was positioned as a protégé who could eventually rise to the No. 1 spot. And here’s where it gets tricky. Jay’s public image is predicated upon his status as an elemental superstar, a man so far above the competition he renders it irrelevant. His flow no longer backs up the brand image, but everything else in his life — from his massive commercial success to flourishing business interests to his chick — has made up for it. J. Cole’s association with Jay means the comparisons are constant, and unfair. How is Cole supposed to shoot for top position when his boss is the one occupying it?

The closest analog is Drake, who also cultivated buzz as a mixtape artist before breaking through with a superstar co-sign, in his case Lil Wayne. But Drake had the benefit of a huge stylistic separation from his mentor that preemptively negated comparisons. He wasn’t being groomed as a director successor. Cole’s mannered persona, and his fundamental, bedrock flow, is so obviously influenced by Jay-Z’s that those constant comparisons would be apt even if his preferred Roc Nation status didn’t exist.

Jay-Z appears once on Cole World, punching in for a spirited appearance on “Mr. Nice Watch.” It almost didn’t happen. As recently as August, Cole was still waiting on a Jay-Z verse, and wasn’t sure if it would actually show. He told VIBE: “[Jay-Z]’s got like four or five days [before the album deadline]. It’s like a Christmas present — I just want it to come. I’m not harassing this man, anymore.” In an overly candid moment, Cole accidentally outed himself as an afterthought. (Did Drake have to beg for his verse?) It was the most concrete manifestation of our dude catching a dent off his relationship with his benefactor. If Jay-Z doesn’t have the time of day for J. Cole, why should we?

Still, if Cole had managed to have a hit during his time in the mixtape trenches (as Drake did with “Best I Ever Had”), much of this would be moot. As he explained to Vulture, that’s what delayed his official debut for so long: “I think it was just, commercially, [needing] a single that cut through. ‘Work Out’ is that to a degree, but I really think ‘Can’t Get Enough’ with Trey Songz is going to be the one to open the doors up all the way. I’ve built up this huge underground following, so now it’s just about getting a record that the mainstream audience can consume.”

That underground following is real, and it is dedicated. And, sometimes, it feels like the underground star route Cole has already achieved may have been his more natural trajectory. As the New York Times points out, “there’s something old-fashioned about Mr. Cole … [he’s] clearly influenced by more organic-minded hip-hop acts like the Roots and Little Brother.” Those are beloved acts that never had to chase hits. They also never had to deal with all the trappings of an endorsement from Jay-Z.

Cole World is an uneven album with thrilling highlights. “Lost Ones” — in which Cole runs through both sides of a dialogue between a young man and the girlfriend he’s accidentally impregnated — has been talked up plenty already, and will continue to be. (At the same time, it’s hard not to think of Jay’s track of nearly the same name.) It’s a worthy debut from a talented, interesting young man, but it’s not a blockbuster (first-week sales predictions are in, and Cole World will probably land at No. 1 with roughly 240,000 units sold. Not a bad number at all, but weak in comparison to his fellow hype recipients: Nicki Minaj did 375,000 in her first week, Drake 460,000. That puts Cole more in line with another underground star, Wiz Khalifa, who did roughly 200,000 in his first week). If “Can’t Get Enough” takes off like Cole hopes, that won’t really matter. For now, he’s got unfulfilled expectations to deal with. But knew it’d be like this. As early as a “A Star Is Born,” with the lines “So clap for him, then applaud Hov / He gave him a platform / Flow so sick thought he wrote the rap for him / No sir,” Cole was trying to politely separate himself from Jay. It’s something he’s going to have to work for a little while longer.