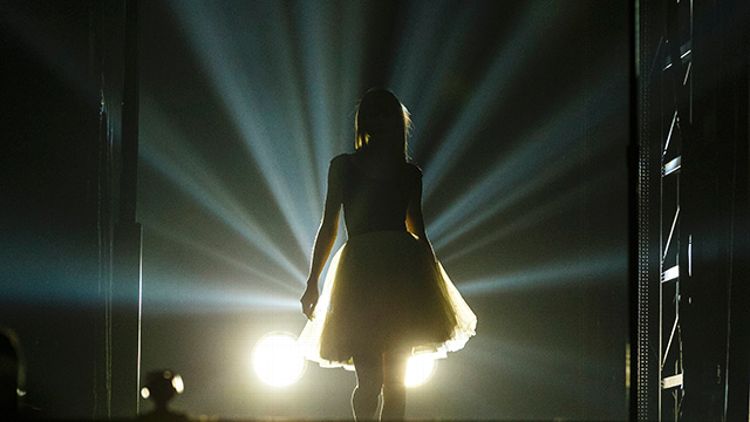 Taylor Swift is in the middle of a sold-out four-night engagement at Staples Center in Los Angeles, and Grantland writers Molly Lambert and Emily Yoshida could not resist the pull of Swiftmania. Last night, they surrendered themselves to the beckoning calls of 15,000 screaming fans, and from their stage-left nosebleed seats they witnessed an evening of song, enchantment, feelings, and ballet interludes, and came back changed women. Here is their story.

Molly Lambert: On our first-ever journey to Swiftopia, Emily and I entered Staples Center ready to be transformed by Taylor’s magic. And we WERE! I was, at least. Nothing about the live show is spontaneous, but I pretended I didn’t know that. I yelled “OMIGOD!” when she brought out Tegan and Sara for a guest song, the least-planned-feeling but obviously planned moment. The audience was so respectful of Taylor that they went silent whenever she talked. Her banter was very bland, but I didn’t care. She is perfect at what she does, and she’s toned down the fake modesty bit. She seems supremely confident, and the set was packed floor-to-ceiling with HITS. I even enjoyed what I heard of Ed Sheeran from the lobby (he apparently raps?). It was fun seeing all the baby Taylors receive their queen, and the audience was a bioluminescent ocean of smartphones and LED signs reading “13” and “MEOW.” It’s a love story, Emily, just say yes.

Emily Yoshida: Not only was this my first journey to Swiftopia, but it was also the first stadium-grade Top 40 act I have ever seen in my life. I wasn’t sure what to expect. Taylor’s Staples Center residency is taking place right across the street from Grantland HQ, so I had been aware of the Swiftmania that had engulfed our corner of downtown. But being in the stadium, lit up with merch-stand glow sticks and packed to the rafters with tweens (and moms, and bros) in tutus, was unlike anything I’ve ever experienced before. When I first entered the arena I was like, “I feel like I’m in a GIF.” 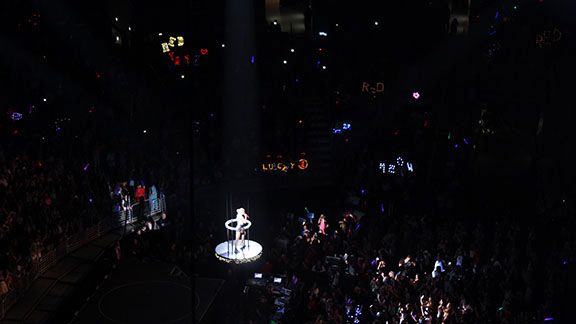 The Taylor Swift Concert Experience is an incredibly finely tuned machine. I think I get the concept, and I approve of it wholly: Basically, you are at a slumber party with 15,000 people where everyone gets to talk about their emotions and just get real as girlfriends. And by everyone, I mean Taylor. This show isn’t really built for the casual fan (me) or newcomer, it’s built for the superfan who hangs on Taylor’s every word and dreams about hanging out with her and Meredith and braiding each other’s hair. It is also a weirdly didactic experience: Taylor is here to teach you about songwriting and emotions and love. I left feeling like I had just gone to a very expensive Raffi concert, which isn’t to say I didn’t find it spellbinding and absolutely fascinating. What do you make of the Swift brand of showmanship?

Lambert: I think the sleepover comparison is totally apt. I told you it reminded me of the Ani DiFranco concerts I actually went to when I was (wait for it) 15. It’s a place where nobody is going to be mean to you, everyone will accept you just as you are, and most importantly, no cruel boys will judge you on your appearance. Taylor fans wear a lot more makeup and tutus than Ani fans, but they both have the same kind of estrogen-heavy PLUR energy. It’s a girl-friendly space, and it’s just nice to be surrounded by the least-jaded music fans ever. 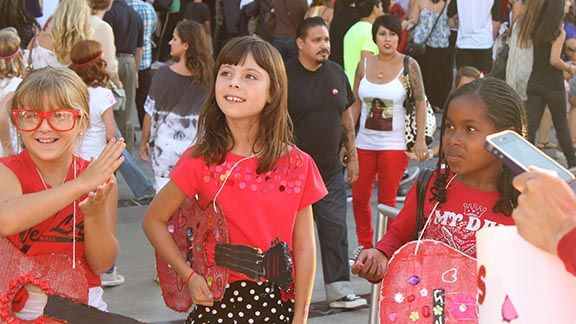 This was also my first Top 40 concert, shockingly. As a superfan, I was excited to hear her perform all my favorite songs, and since you’re wondering, the highlights were “Sparks Fly” and “Treacherous” (and when she said “like, ever”). We both liked the part where she humped a red piano Tori Amos–style. Plus, she FLEW OVER THE AUDIENCE. While I do hope Taylor chills out on the pop star stuff at some point long enough to make a dulcimer bluegrass album, she’s got lots of time.

Yoshida: I mean, she’s a fascinating presence. I’ve always thought that TaySway was gorgeous, but when you see her live, you are absolutely transfixed by her charisma, even if some part of your brain is trying to resist it. In nearly every song, she takes a moment to look at the camera that feeds to the JumboTrons and give a little knowing smile. It’s so blatantly calculated, but also the kind of thing cults have been built around. The best/most insane moment was near the end of “All Too Well,” the aforementioned piano-humping number, when the music cut out right before the final chorus and she put her hands somberly in her lap and looked out at the audience with this sincere, heartbreaking gaze that lasted about 10 seconds. Taylor Swift CONNECTS, y’all.

Speaking of “Fifteen,” that was the one non-hit song I really wanted her to play, and I’m pleased to report my wish came true, after Taylor crowd-surfed to the other end of the arena for a few acoustic-y songs. I was telling Molly I like that song so much because it sounds exactly like what it’s about in a way that some of her other songs, while fun, don’t always capture with that kind of specificity. Before starting it she dedicated it to all the fans in the crowd who would be starting their freshman years in the next couple weeks, and Molly said she heard someone behind us amend the dedication with “freshman year of COLLEGE!” Those sorts of moments make me happy, and kind of transcend the kind of fans-only world that is Taylordom. 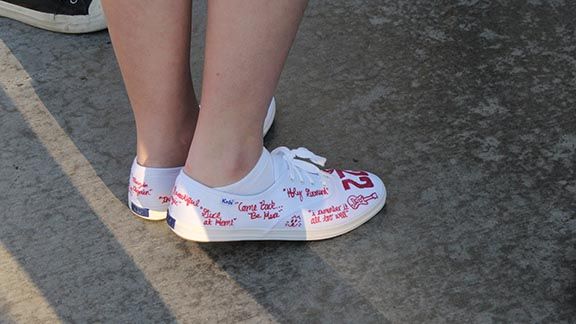 Lambert: Yeah, it’s super culty, and I realize that some of the things I am saying I like about the Taylor Swift live experience might also be true of fascist rallies, but I mean, that is the power of TaySway. Her audience would do ANYTHING for her. She just happens to use it for good, to reassure a bunch of girls that love is real and intense feelings are OK. It is obviously a very defanged live music experience in some ways, but I was pretty awestruck by the hair-metal stage special effects, and did I mention she FLEW? I caught a piece of red confetti during the “We Are Never Ever” finale, and I felt so dumbly happy, like a baby beluga in the deep blue sea of LED signs made by hardcore Taylorheads. 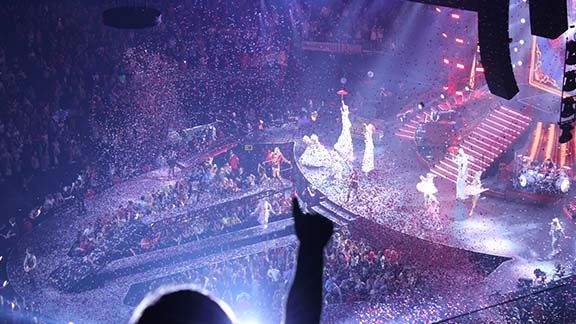 There’s just something so interesting about a whole show built around one performer. Swift is not the world’s greatest dancer and I would have loved to see her play a guitar solo in place of one of the dance breaks, but it’s her personal pop fantasyland to create, not mine. My other favorite part was the film noir–themed intro video for “The Lucky One” where Taylor (as history’s most wholesome femme fatale) warns her fans that success won’t make them happy, but also tells the haters to suck her left one. I love “Fifteen” as much as you, and this is the first time I connected it with Big Star’s “Thirteen” in my head, another song about the melancholy nostalgia of first love. Taylor’s a talented songwriter wrapped up in the marshmallow princess dress that her audience has come to expect.

Also I enjoyed going with YOU, my Swiftster. I couldn’t live in Swiftworld; I like androgyny and irony too much (although, again: Tegan and Sara!) But I loved our visit to the alternate universe populated by blonde, bebanged, and ponytailed Children of the Corn girls. I look forward to our next adventure in Top 40 pop theatrics. Perhaps BRITNEY IN VEGAS?

Yoshida: I don’t know if I can sign up for another arena show without knowing whether TSwift’s dubstep violinist will be included in the ensemble, but something tells me that lady will be finding plenty of work in the next few years. Till Vegas (or Selena Gomez on November 8, 2013) then. In the meantime, we have GOT to work on our signage game. 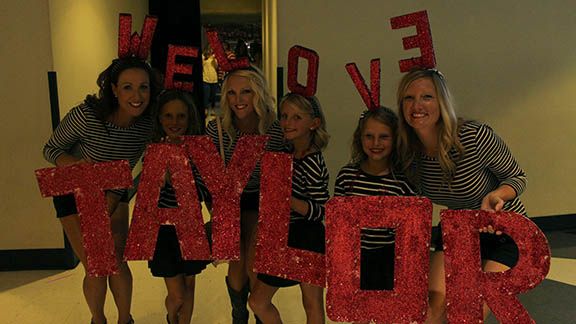 Filed Under: Taylor Swift, We Went there