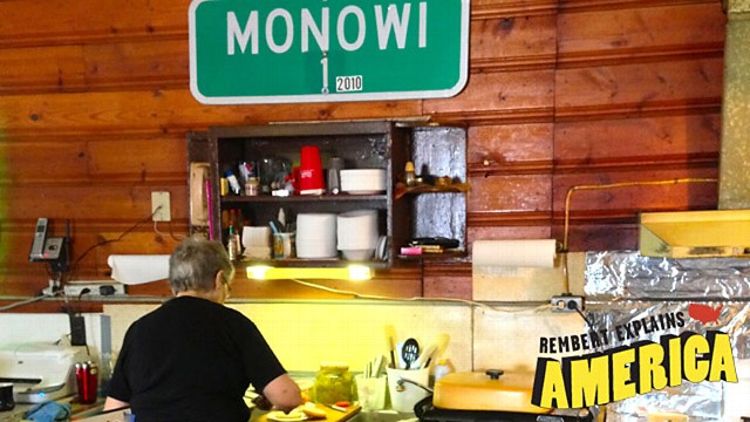 The morning trip to Monowi, Nebraska, was long overdue. Twice I’d driven through the Midwest knowing that this small town existed and twice I’d passed up the opportunity to visit. But finally, after waking up only a few hours away in Sioux City, Iowa, and headed west, I knew this was my last opportunity.

As a series of Gran Torino–fueled front porch thoughts rushed through my brain, I drove by a sign.

Elsie Eiler is the lone resident of Monowi, Nebraska. And according to the 2010 census, this was the only incorporated town in the United States with such a distinction.

When I realized that I’d arrived, I passed a street and then looked for somewhere to pull over. After about 10 seconds, I realized what had just happened.

That side street was Monowi. And now I was, again, out of town.

Turning around at the first opportunity, half a mile up the road, I made it back to the side street, the site of four buildings, one car, and a John Deere tractor.

Furthest from the street was a home, the one I assumed Elsie lived in.

Parking the car, I approached the house. Based on the car adjacent to the home, this certainly was her residence.

I knocked on the door. There was no answer. Perhaps she was taking a while to get to the door. She was in her late seventies, after all. Two minutes later, I knocked louder. Again, no response. Maybe she was gone?

I walked outside and went to the next building.

I knocked on “Rudy’s Library,” but again there was no response. At the neighboring structure I got the same result.

When I walked past the building closest to the street, the Monowi Tavern, I was sure she wouldn’t be there. It wasn’t even 11 a.m., and from what I’d gathered online, the place seemed like a weekend dive destination for Midwestern tourists passing through. However, there was a small sign in the window that said “Open.”

I entered the Monowi Tavern. Immediately, I was greeted by two sets of eyes that looked surprised to see someone walk through that door.

Or maybe it was me.

Both were sitting down and I was sure the woman was Elsie. The second person, someone I was not expecting to see since I assumed my presence was doubling the population of the town, was a man who appeared to be about Elsie’s age.

“Good morning,” he said to me. I looked at Elsie and she smiled. Knowing what to say, but not to do with my body, I replied with the same phrase and remained standing. Realizing we’d reached an immediate stalemate in the conversation after only four words, I walked to a chair and sat down.

“You just driving through?” the man said as soon as I sat down. I told him I was headed to Seattle. He seemed curious for more information.

“How long you been on the road?” he continued.

I didn’t really know how to answer. The truth was simultaneously two hours since Sioux City, three days since flying into Omaha, and 12 weeks since the road trip began.

“Two days,” I settled with. I didn’t really feel like telling my life story just yet.

“Well I never get very far,” he continued. “I was born out here and have lived on that side of the highway all my life.”

He continued to talk, and while he went on, I noticed Elsie had yet to say anything. She smiled a ton when he told stories about the lotto and how he can’t drink anymore, but she was rarely vocal. Then suddenly he propped himself up, walked over to the bar, and brought back a picture.

The two of them in a wheelbarrow. From 1937. In Monowi, Nebraska.

“That’s a great picture,” Elsie said, standing up to put away some dirty dishes.

“We tried to re-create it, but couldn’t find a big enough wheelbarrow,” he said. All three of us laughed. At that moment, I asked Elsie for a coffee, finally comfortable enough to settle in.

We continued to talk about the issues of the day — most concerning themselves with the weather — and then Elsie’s lifelong friend said he had to go bale some hay before it got too hot. We walked out together, myself to get some cash out the car and him to drive away.

When I returned, it was just me and Elsie. I started wandering around the bar with my coffee. She turned on Gunsmoke and began to clean. The walls of the bar were filled with memorabilia from her life, the life of the bar, and thus the life of Monowi.

I noticed that she’d finished the dishes and sat back down, so I joined her. I wanted to finally hear her story. Looking over her head at the updated 2010 Monowi population sign of one, I noticed a sign indicating that the tavern was closed on Monday.

“Good thing,” she says. “I was at the doctor, so the whole town was cleared out.”

A giant smile crawled over her face. After nearly an hour, she’d finally made a joke — the joke — that I traveled two hours to hear. It was as if she’d given me permission to ask all of my silly, touristy questions that she’s heard time and time again. So, armed with a coffee cup filled to the brim, sitting next to her in this empty bar, I cleared my throat and prepared to talk.

“Hey, Elsie, you got some soap and water we can borrow,” a man said, bursting through the side door. She stood up, waved at the man, who was accompanied by a second man and his son, and gestured them to come to the sink.

As this happened, the group ordered three burgers, two sets of fries, and three drinks. So, instead of sitting back down to talk with me, she abandoned her perch and her coffee (and me) and got back to work.

I was never going to get these questions in.

After the two men and the kid ordered their burgers, I figured I might as well ask for one too.

As soon as I did, another guy walked in. Seeing the outline of a tractor trailer in the parking lot, I assume he was simply passing through. But then he approached the table of three:

“How you doing,” he said to the group.

“Better than you,” one fired back, causing everyone in the room, except for me and the little boy who needed water and soap, to laugh.

Everyone was a regular.

He sat at my table and also ordered a burger and fries, sending Elsie back into the kitchen only minutes after taking my order.

This was not the lonely cat lady that I’d imagined. This was a busy woman. A provider. And she seemed happy.

The next 20 minutes included the delivery of five cheeseburgers and an assortment of fries and drinks. I grabbed a newspaper and read (and reread) the same front page sports article as the entire room engaged in a series of conversations, from griping about vegetarians to griping about angus beef to griping about sea salt.

“You know what’s actually bad for you,” one of the men chimed in, after shunning a series of new-school healthful lifestyles. “Pop is probably the worst shit for you,” he said, as he took another long sip of soda.

“Well, they say the diet stuff is even worse than the regular,” Elsie replied, bringing over a knife to cut the little boy’s cheeseburger.

After feeding everyone, and becoming less involved in the men’s jabs at one another, she came back down to sit in her seat, next to me. She couldn’t completely tap out of the conversation, however.

“Isn’t that right, Elsie?” one would often ask regarding some story, hoping she would nod her head in approval.

Watching her take an inventory of the contents in her bar, I turned to her and asked, “Is the library open?”

“Oh sure, I’ll give you the key and you can go over,” Elsie said and stood back up to find it. It was clear she liked to stay moving, never sitting still, never getting too comfortable.

Returning with the key, we continued to talk.

“We put the books in there nine years ago last January,” Elsie said, “after my husband passed away. He was getting it ready.”

“Since then, I’ve had a lot more sent to me, by the authors, and we put those in. But every now and then, someone’ll bring a big box full, but there’s really no room for them. So we have to give some away. There are boxes piled in there, you’ll see, we haven’t done anything with.”

She didn’t seem hesitant to talk about her husband. Elsie wanted it to be known that a great deal of what she did was in her partner’s honor.

“He had it ready to go, but then he passed away, but then that May my two kids and a couple of nephews came down and helped.”

When she mentioned kids, I was caught off guard. You read about a woman who lives alone, in a town in which she’s the lone resident, and your instinct is to assume things aren’t well with her. And that she has no one.

With every passing minute, this was proving to be an unfair assessment of Elsie’s life. The life she’d chosento live.

“One of my kids lives down by Sioux City. My grandson went to school in Germany and the Netherlands and he’s now working in the Netherlands. And there’s my granddaughter in Omaha, who’s about to have a baby. Everyone’s growing up. But I’m excited to have a little baby again.”

She giggled and then walked away for a few seconds, returning with a manila folder. Inside, there was a series of old photographs.

“I have no idea what was going on,” Elsie said referring to the crowds in some of the pictures. “Something pulled all the farmers into town, who knows?”

She smiled and, again, stood back up. I knew what that smile meant. This tavern was doing just that, some 100 years later. I stared at her in wonder as she wiped off the countertops, straightened the barstools, and then took a long look at her clean bar.

After the other patrons left, I grabbed the key, walked outside, and opened the door to Rudy’s Library, named after Elsie’s husband.

Like the bar, the library was functional, but also a collection of her history and that of the town.

After about 20 minutes of thumbing through issues of National Geographic and Reader’s Digestfrom the ’50s and ’60s, as well as applauding that one copy of Roots, I walked back to the tavern.

Inside sat six new men with an assortment of food orders pending, on their plates, or already in their bellies.

I sat at the bar briefly, before deciding that I should go. Elsie walked on her side of the counter and asked me if I wanted anything else. I declined, but couldn’t stop looking, and laughing, at the series of town-issued licenses on the wall.

Two hours had passed, and I’d forgotten to ask her the one question I came to inquire about.

“Yes. I’m the mayor,” she responded proudly. “Of Monowi.”