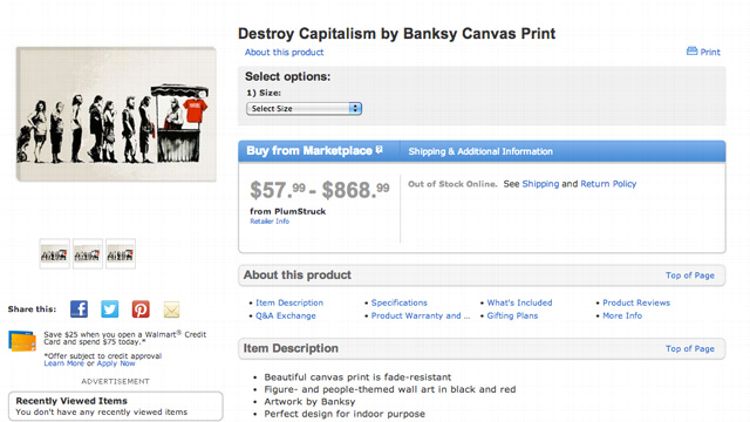 After the “Elan and Diane” meme that swept across the post-Thanksgiving blogging desert turned out to be entirely false (an invention of Bachelor producer Elan Gale), it was no wonder the much more hilarious “Kyle Kinane Pace Salsa Picantroversy” would also be revealed as a prank, meant to exploit our attention during a time of traditional online dead air. Since being betrayed by @Horse_ebooks earlier this year, we’ll never be able to look at a found Internet joke the same way. But trolling salsa drones or harassing a stranger on a plane are such small potatoes. Aim higher, hoaxers! So what should be made of the Banksy prints being sold on Walmart’s website yesterday? Popular Banksy works including one titled Destroy Capitalism were offered for a bizarre range of prices, until they were taken down later in the day. The prints were being sold through Walmart’s site by third-party vendors called PlumStruck and Wayfair, and actually included a piece by graffiti artist Eddie Colla mislabeled as Banksy’s.

Was it a Banksy holiday hoax for the imaginary shopping holiday known as “Cyber Monday”? Walmart’s “Cyber Week 2013” promotion promised huge savings for customers aiming to gift shop or just get deals on expensive items. It was the most profitable Cyber Monday ever, generating an estimated $1.74 billion in revenue for businesses. The term “Cyber Monday” was invented by marketing firms to promote online shopping in 2005, supposedly after research found that the Christmas shopping season that kicks off on Black Friday enjoyed an online spike the following Monday. The phenomenon of Black Friday has apocryphal origins in 1960s Philadelphia, and Walmart is a particularly huge winner on the occasion every year, increasing annual profits by billions of dollars.

Either Banksy used Wayfair and PlumStruck to slip his art into the megabusiness’s online store, or it was an innocent accident that became a small incident of culture-jamming. It feels enough like a stunt to merit a closer look. Earlier this year, Banksy sold a series of genuine prints on a New York street, recontextualizing the value of his artwork and at the same time commenting on how arbitrary gallery pricing is. The story has already been widely reported online, gaining traction on the same sites that fell victim to the Diane and Pace salsa hoaxes. But if Banksy did orchestrate it, what would the point be? To make money for Walmart by selling Destroy Capitalism prints? To prove it’s easier than you might think to subvert a giant, faceless corporation? To draw attention to Walmart’s heinous labor practices, like the class-action lawsuits brought against them for continually failing to promote women?

Eddie Colla released a new print called It’s Only Stealing If You Get Caught to commemorate the incident, and so far Banksy has been mum. Banksy’s prints, whatever you think about their sometimes ham-handed methodology, are world famous and instantly recognizable. He’s made the work so desirable that they really could sell it at Walmart, where it would sit alongside other former symbols of insurgency turned into massively reproduced images available everywhere, like the iconic stencil of Che Guevara. Maybe it’s just the first step in a multipart plan to undermine the art world that has made Banksy a star. His work acknowledges that it’s not just about content — it’s just as much about P.T. Barnum–style promotion. We’re still hoping there’s more to this story. Hopefully, there’s a tie-in with Art Basel.

History Turns to Eli Roth for a Show About Jesus

Cats: The Motion Picture Is Coming. Maybe. Get Excited, Either Way.