Cats: The Motion Picture Is Coming. Maybe. Get Excited, Either Way. 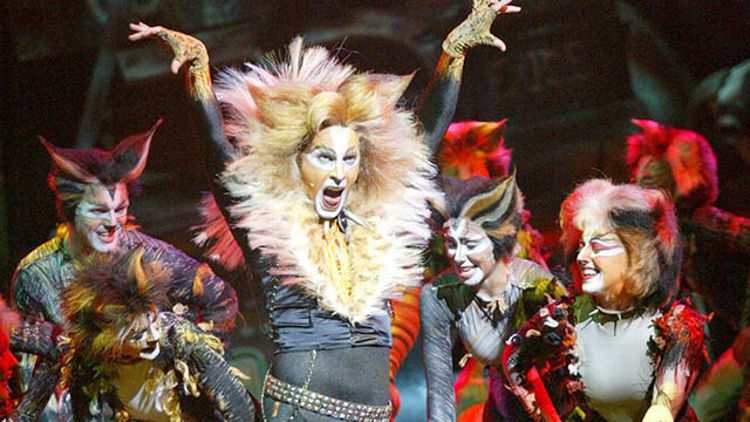 You can’t explain Cats. You have to experience it. The show is light on plot and heavy on chillingly, embarrassingly absurd lyrics and visuals. It’s a show that gets into you, infecting you with sillies; you will die with traces of Cats in your blood once you’ve been exposed, like those parasites in the litter box that turn your brain into a smashed can of whitefish feast. There is no treatment for these Jellicle earworms. In an interview with The Daily Mail, Andrew Lloyd Webber revealed that the musical, one of the longest-running shows in Broadway history, may be headed for the big screen. Citing the adaptation of Les Misérables and our reinvigorated interest in musicals, Webber said that “Universal has now got Cats out of the drawer [ahem, BAG] in which they locked it years ago when they bought the rights and suddenly they’re talking about a film.” According to Webber, “we never knew whether the public was going to love Cats until the moment we saw a cat go on stage. It could have been the most terrible moment of bathos in musical theatre.” Some people, of course, still think that it was, and maybe they’re right. The source material for Cats is a book of poetry by T.S. Eliot titled Old Possum’s Book of Practical Cats. Eliot was a cat man who enjoyed “bestowing upon [his pets] such names as Man in White Spats,” but who knows what he’d have thought of Webber’s spangly musical, which debuted more than 15 years after the poet died. The songs are faithful to the poems, but you’ve still got to wonder about the expression on Eliot’s face were he to witness this:

The West End production of Cats was filmed and released straight to video in 1998, but I’ve always preferred experiencing Cats via the YouTube archives of school productions. Here it is in Japanese; in this one, they basically climb into your lap. You could be 4 years old and do Cats, but while we’re still in this beautiful twilight between the promise of a Cats film and its execution, why not play the fantasy cat-sting game for a second?

WE HAVE TO FIND OLD DEUTERONOMY.

Vanity Fair has already done this exercise, but I have to say I disagree with their choices. Bobby Cannavale, clear your schedule. You’re the Rum Tum Tugger. You’re welcome. Vanity Fair had something going on with Neil Patrick Harris as Mistoffelees, but I’m into the idea of Daniel Radcliffe — he’s a magical cat, a phenomenal cat! Bustopher Jones: John Goodman or Philip Seymour Hoffman. The jury’s still out. Jim Carrey would make a pretty good Macavity, but so would Jamie Foxx. I know it’s a long shot, but I’d like to get Al Pacino’s people on the phone to discuss the role of Gus and work on settling Jessica Lange as Grizabella, preferably with veils draped over her ears and long eyebrow whiskers. It’s hard to top VF’s suggestion of Sir Ian McKellen for Old Deuteronomy, but McKellen is only 74. James Earl Jones is 82. Do the math, cats. Do the math.

Munkustrap, the narrator? I’m thinking Mark Wahlberg. I’m not bothering myself with earthly concerns like who can sing or who can dance; this is a film, after all, and those things can be fixed up. We’re securing financing right now. We’re on the highest branch of the feline tree in diamond-encrusted leotards. That’s why Jennyanydots, the cockroach coach who was almost played by Judi Dench, now belongs to Lady Gaga. Jennifer Lawrence, my favorite kitten, you can take your pick of the red one, the burglar one, or the white dancing one. Great footwork in Silver Linings Playbook; you’re perfect. The eyeliner will be applied to Grumpy Cat and Lil’ Bub (as chorus cats — they lack adequate theater experience and are still proving themselves as artists) in postproduction. David Bowie will stand onstage the entire time, sensuously kneading a bath mat. This is all obviously best experienced in IMAX 3-D.

This is going to be the best movie of all time.