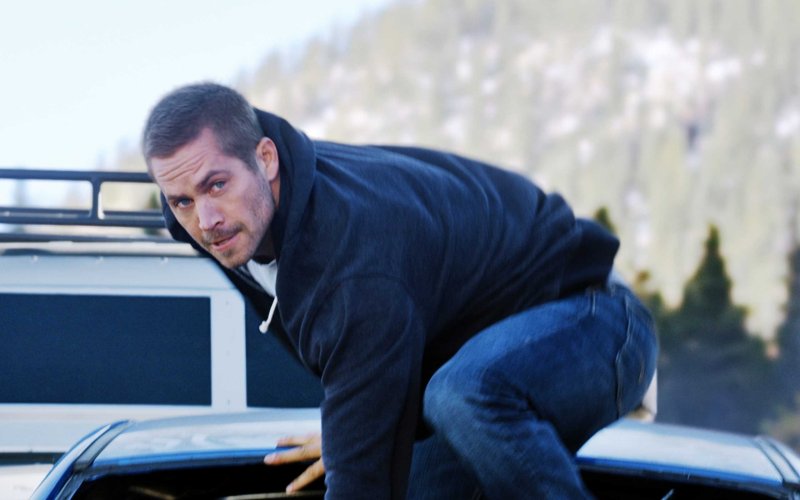 This post discusses specifics of the plot of Furious 7. If you’re spoiler-averse, proceed with caution.

Another iteration of a car-action franchise rightly acclaimed for its unabashed, nitrous-propelled dumbness can bear only so much reality. When Paul Walker died in a car wreck in November 2013, the production of Furious 7 was under way but far from finished, and the rest of the movie was shot around his absence. But with all due respect to the CGI technicians whose sweat and ingenuity made this possible and — in all but a few uncanny valley–ish moments — plausible, putting Walker back onscreen was the easy part. The bigger question was how Furious 7 would go about honoring Walker’s memory and processing extracinematic tragedy without sacrificing speed and fury. We’ve known since last year that Walker’s character, cop turned daredevil Brian O’Conner, would be retired and not killed off; before the movie screened in public for the first time at South by Southwest on Sunday night, producer Neal Moritz begged those in attendance not to reveal further specifics of O’Conner’s exit. Suffice it to say that while Furious 7 does finally pour a few sips of Corona on the curb for Walker/O’Conner, it’s still fundamentally a Fast & Furious movie, with all the glee and absurdity and Ludacrisness that entails. It looks death in the eye and screams one existential question: Turn down for what?

As per usual, the setup is both superfluous and brain-teasingly convoluted. Here goes: In 2013’s Fast & Furious 6, the State Department’s Agent Hobbs (Dwayne Johnson) enlisted O’Conner, Dominic Toretto (Vin Diesel), and the rest of the gang to stop a mercenary named Owen Shaw from completing a doomsday device, which they did, apparently killing Shaw in the process. That movie ended with a coda that resolved some longstanding continuity issues with the franchise by revealing that the car-crash death of Sung Kang’s Han Seoul-Oh — an event that first took place in 2006’s The Fast and the Furious: Tokyo Drift, since retconned as having taken place somewhere between the climax and the end credits of Fast 6, long story — was an act of vengeance committed by Owen’s brother Deckard, a disavowed British special-forces assassin and “legitimate English badass” played by Jason Statham. In other words, this was always going to be a more somber than usual Fast & Furious film — the first act includes Han’s funeral, the back-from-the-dead semi-amnesiac Letty (Michelle Rodriguez) visiting her own grave and struggling with a PTSD-ish case of the flash-cuts, and plenty of talk about consequence and history, the past and the present, the road ahead, and the deceptive closeness of objects in the rearview mirror. That said, there’s also a fight scene between Hobbs and Shaw in which Johnson and Statham take turns crotch-punching each other through pane after pane of breakaway glass while the camera rolls and tumbles with them. Johnson joined this series in 2011’s Fast Five and immediately became the best and most self-awarely comedic thing about it; you can always smell what the Rock is cooking, and he’s always cooking the finest, most savory ham. He disappears from the film for a long stretch after that, taking a considerable amount of sparkle with him.

As a consolation, the role of Agent Exposition from the Federal Bureau of Pipe-Laying is filled by schlock-action demigod Kurt Russell as “Mr. Nobody,” a beer-snob covert-ops guy in a black Lew Wasserman suit who shows up to make Toretto and his bereaved gang an offer they can’t refuse. He’ll let them use an omniscient surveillance system called the God’s Eye to find Shaw before he finds them; all they have to do is rescue the God’s Eye’s kidnapped inventor, a hacker named Ramsey, before the technology falls into the wrong hands. This being a Fast & Furious movie, it will probably not surprise anyone that (a) the kidnappers, led by Thai martial-arts icon Tony Jaa, have foolishly chosen to move Ramsey through the Caucasus Mountains by motorcade, and (b) Russell just happens to have a muscle-car-armoring facility right over here. The movie foregoes the seemingly imminent ride-pimping montage to proceed more quickly to the part when our heroes drive their cars out of the back of a C-130 at cruising altitude; the ensuing cliffside/off-road chase-shootout-rescue sequence ends with the first of several moments in which Walker’s character cheats death rather dramatically. We’ve seen that happen over and over in these movies, but in Austin it brought the house down, and the cheering felt cathartic. 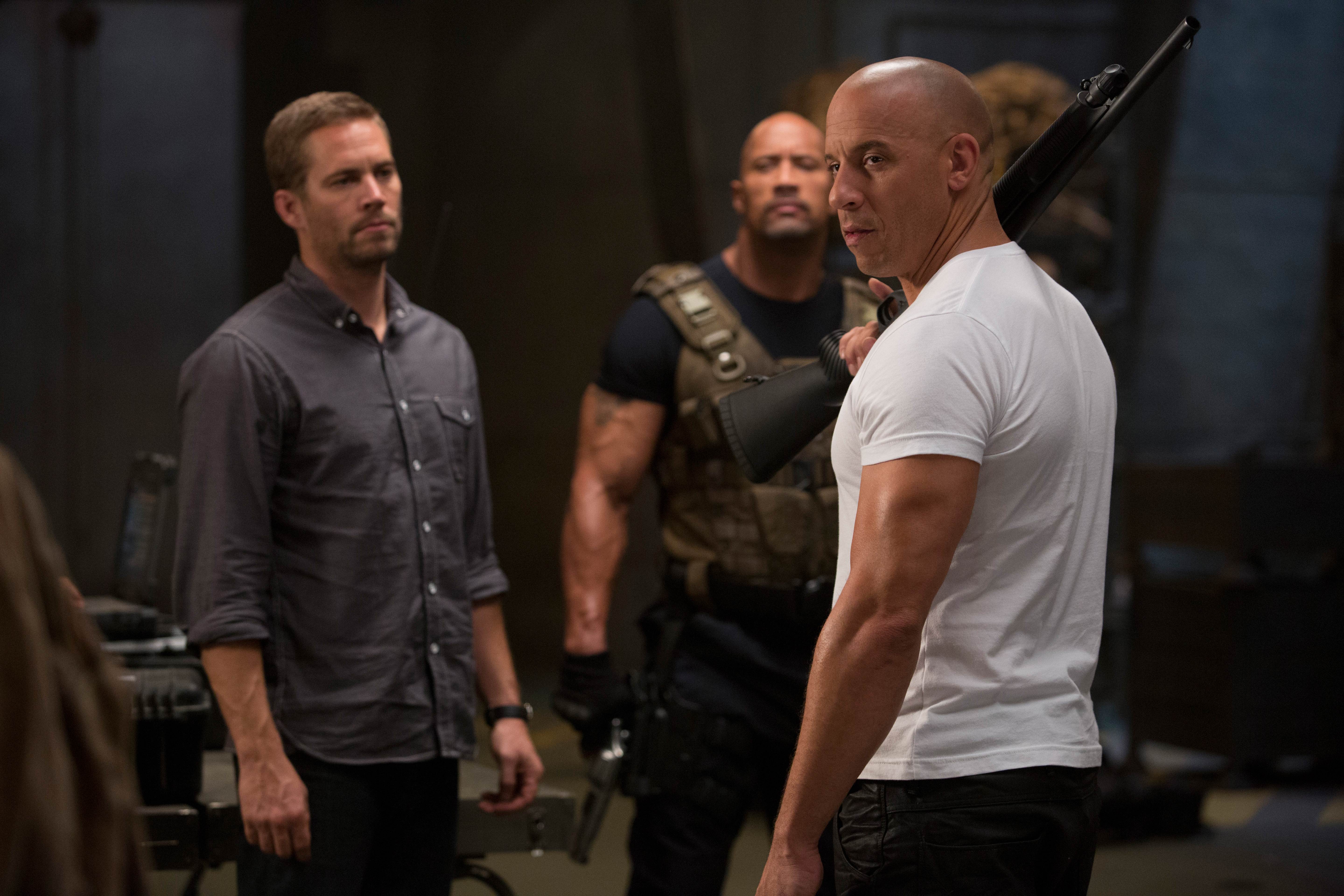 Ramsey turns out to be (spit take!) a woman, played by Game of Thrones’s Nathalie Emmanuel. The next time we see her, she’s emerging from the surf in Abu Dhabi in a bathing suit that verges on the purely theoretical, which I’m sure women in the tech sector will appreciate as the stereotype-defying moment it’s meant to be. These movies have always taken an auto-show approach to the female body, but there’s something extra ogle-y about the way new-to-the-franchise director James Wan stocks his crowds with ass cleavage. In general, Wan (who somehow managed to make Saw and a couple of Insidious movies without throwing in even one bikini car wash scene) proves a capable but unremarkable replacement for Justin Lin, who directed the previous four Fast & Furious films but bailed when Universal wanted him to begin prepping Furious 7 before he’d finished Fast & Furious 6. The showpiece car stunts — including the spectacular Etihad Towers jump that closed the Super Bowl trailer — are bigger than ever and therefore don’t allow for a lot of directorial flourish, but there’s a great moment during the lengthy downtown L.A. chase at the end of the movie when Diesel’s black Dodge Charger rears up and basically mounts Statham’s car like a rhino sexually dominating another rhino.

Should I bother telling you that the L.A. sequence — which also includes a Predator drone, Djimon Hounsou in a helicopter, and a suspiciously underlit fight between Walker and Jaa — is actually kind of an overcrowded mess? Or that Statham’s entire job is to show up like clockwork at the end of every action scene like Dick Dastardly as a video-game boss, to the point that it becomes funny? Or that this movie actually finds a way to waste the talents of Iggy Azalea? Yeah, I didn’t think so. Furious 7 is by no means the best Fast & Furious movie, but given the circumstances under which it came together, it’s the best version of this particular Fast & Furious movie imaginable. The film itself is the most audacious stunt in the history of the franchise. And while O’Conner gets an appropriately sentimental curtain call that acknowledges Walker’s death without exploiting it, the real ending strikes a proudly exploitative note, all but promising us another sequel, not that it wasn’t obvious already. Diesel growling “One last ride …” was a huge applause line in Austin, but it was also the movie’s funniest joke.

Small(er) Movie Roundup: Because 'Cinderella' Can’t Have Everything