Small(er) Movie Roundup: Because ‘Cinderella’ Can’t Have Everything 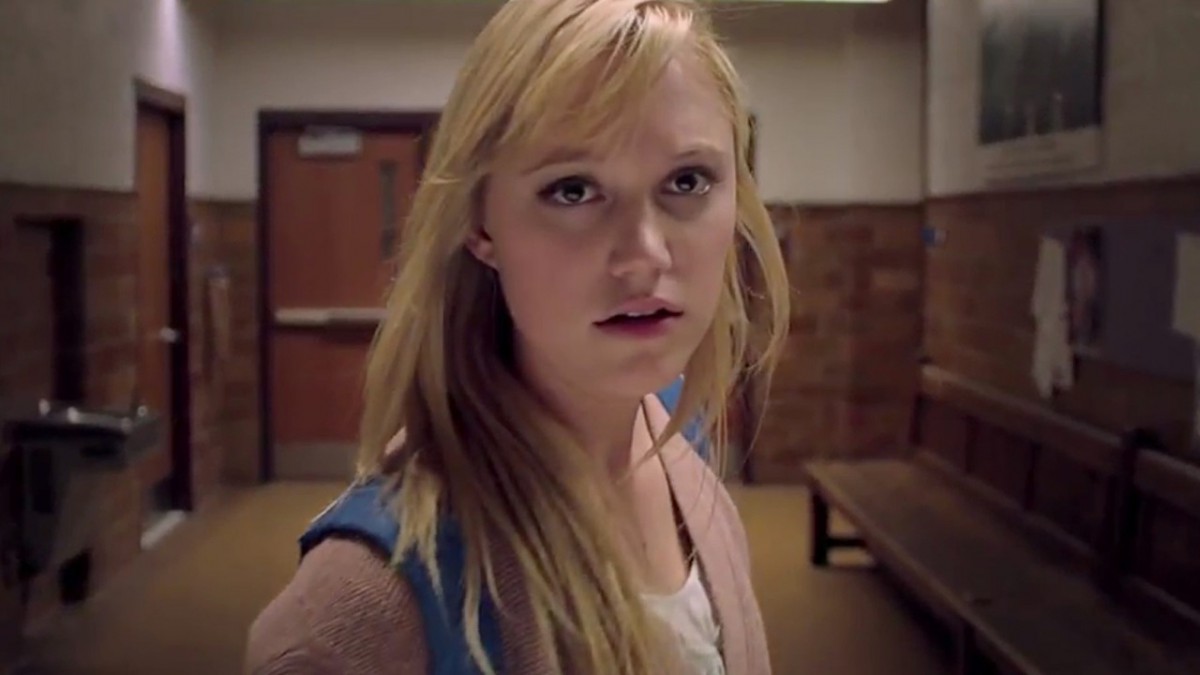 Right now, the campus-sexual-assault documentary The Hunting Ground is bringing people to tears and outraging universities with its incriminating concentration of dire statistics and accounts from activist survivors. There’s no breaking news, just an overwhelming, seemingly insurmountable wall of anecdotes concerning a staggering number of alleged rapes, administrative cover-ups, denials, and meager punishments. That film got eerie company last week from It Follows, a slasher film of sorts with a great name and a chilling, metaphorical handle on sex and assault.

What it lacks in actual slashing, it makes up for in atmosphere. Most of it evokes the attacks on lust that flourished in Alfred Hitchcock’s Psycho and The Birds and that were rampant in the high school nightmare movies of the 1970s and 1980s. It Follows is set in a suburban Detroit where teens are raised on a steady diet of old science fiction and monster movies, with nary a parent in sight. Jay (Maika Monroe) thinks she’s on a fun date with Hugh (Jake Weary), only to discover, after she wakes up tied to a wheelchair in her underwear, that she’d been chloroformed and driven to an empty parking lot. It’s a date from hell.

She’s been cursed, Hugh tells her, because they had sex. Something is going to keep following her, in various human forms, until she either passes the curse to someone else through intercourse or the curse kills her. Indeed, there’s a naked woman chasing them in the lot — Hugh’s previous date. As an allegory, this is surprisingly free of glibness. Mitchell merges the grim adolescent rites of horror movies with the grisly risks of having a libido at any age. (The men and women chasing her range in age and size and beauty.) The horror of the scenario is as much emotional as it is visceral — maybe more so, given the amount of time the film shows the kids just sitting around, bored.

Like Jennifer Kent’s crazier, more grandiose The Babadook from last year, Mitchell turns post-traumatic stress into a kind of schlock art. It Follows dares to personify the anxiety around such disparate subjects as arousal, assault, and sexually transmitted disease and make them supernatural. Because a lot of what is going on here, scary-movie-wise, has been well established by scores of other films, Mitchell doesn’t have to overdo the social commentary. The anonymous metaphysical stalking is its own comment. 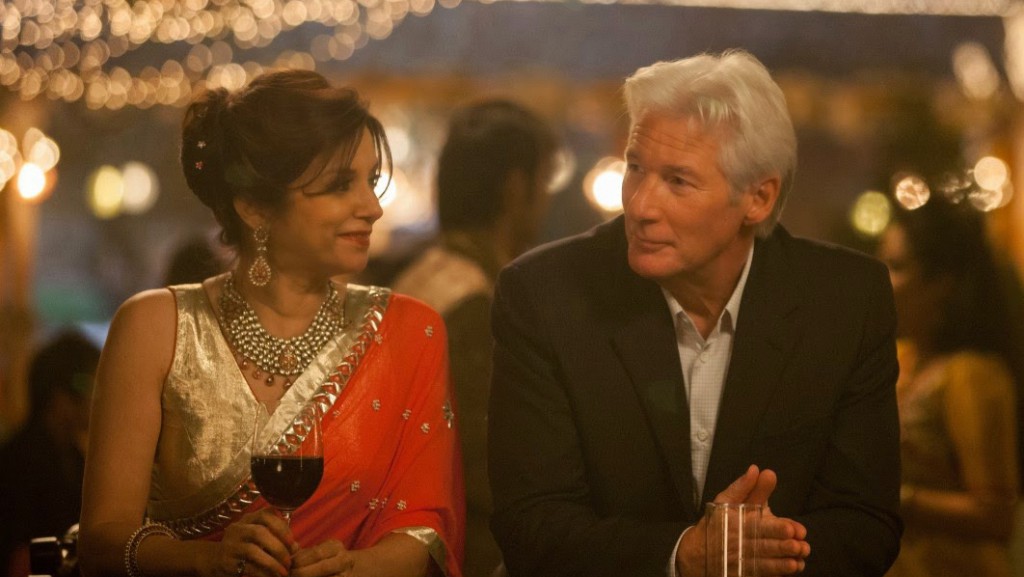 Not far into this sequel to the 2012 hit, Judi Dench explains to an Indian scarf vendor why she’s chosen him as opposed to his competitors (something about the quality of his silk). She does so with the delicacy used to put a child to sleep. When she’s done, the vendor gives her a warm bath of a look and does the equivalent of wrapping her in a towel. “Thank you for your respect,” he all but sings. As preemptive disclaimers go, it’s right up there with “based on a true story” and “ you wouldn’t really hit a guy with glasses, would you?” This one says, “Be kind to us. We harmed no Indians in the making of this movie.” But for a film like this — in which a handful of British people ransack Jaipur with their heartaches, verbal sniping, and doctor’s visits — some recognition of the narrative imbalance is merited.

The whole movie is caught somewhere between apology and entitlement. But Madden and writer Ol Parker keep the plots lubricated with mild, geriatric comedy that Maggie Smith, Celia Imrie, Bill Nighy, and Ronald Pickup, among others, can play without much heavy lifting. (Nighy barely has to enunciate as he tries to make Dench commit to him.) There are more story lines and coincidences than there are people in Jaipur. Even Richard Gere is now on the scene, as an American who claims he’s writing a book and whom Imrie, already drowning in Indian suitors, sees as another potential snack.

But Sonny (Dev Patel), the proprietor of the Best Exotic Marigold Hotel, where the old white Brits have all moved, swears that Gere is there evaluating Sonny’s suitability for an Exotic Marigold franchise. Most of the plots concern Sonny’s upcoming wedding to Sunaina (Tina Desai), who’s annoyed that Sonny would rather flatter Gere than rehearse the reception dance. Sonny’s jealous of Sunaina’s family friend, who just bought the building Sonny was eying for his expansion. Patel’s the one doing all the lifting (he’s about a third of Smith’s age). Most of what he’s picking up is Indian kitsch. He doesn’t seem to know how demeaning all of this obsequiousness appears. But it’s the situation he’s playing, not the “yes, boss” fawning. And some of his situations are actually funny.

Some are not. One character is gravely ill. And Penelope Wilton returns as Nighy’s toxic wife, Jean — she practically is a disease. You watch it all in a state of amused disgust. This isn’t the will to live. It’s mortis interruptus. 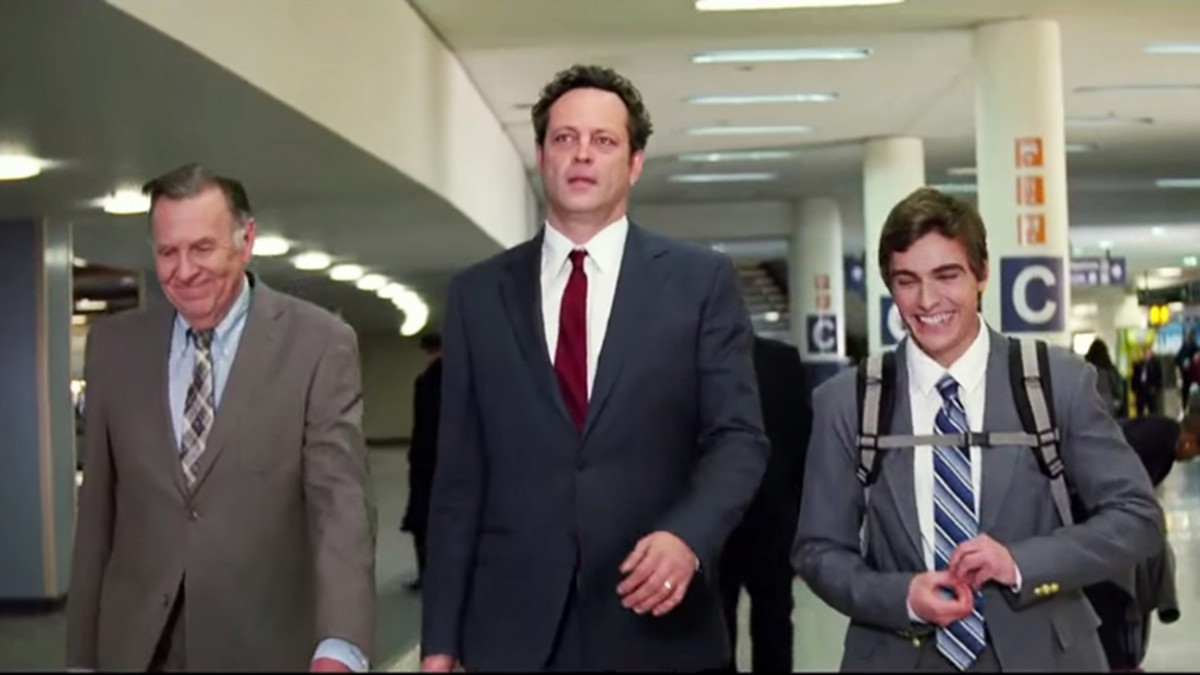 Tom Wilkinson was the best thing about the original Marigold Hotel. His character came out of the closet, then died. Now, instead of frolicking in Jaipur, Wilkinson is in a flat, confused Vince Vaughn comedy about three generations of businessmen fighting for a bacon-saving deal (Dave Franco is the rookie). One mild strength of the Marigold Hotel movies is that it knows what it is and who it’s for. This movie, directed by Ken Scott, has no idea.

It needs a director who can handle the mix of the bizarre, the raucous, and the conventional: the collision of tequila slaps, keg stands, G8 protest riots, and Sienna Miller as an American business sniper. But come on. The only person who’d know how to get a single movie out of scenes that include Vaughn talking to penises that droop out of glory holes at a German leather bar, then FaceTiming with his outcast Midwestern tweens, might be John Waters, who’d never go near Steven Conrad’s script. The movie either needs to be a carnival or a Jack Lemmon–style, scenery-chewing drama. Instead, it’s a pebble at the bottom of the vast canyon between the two. The domestic scenes feel at odds with, say, Franco’s latest erect-penis trick and the ongoing misuse of the wonderful Nick Frost, here doing more of his poor-fat-me bit.

The movie gets dumber and more desperate as it goes. By Vaughn’s track record, this counts as another turkey, like 2013’s Delivery Man, also directed by Scott. But I didn’t leave either movie convinced the problem is Vaughn. The talkaholic, lunatic act that made him famous is aging into a place of comedic stability. He’s now the least crazy, least naughty person in his films, and that has made him a fascinating actor.

The best scenes in this movie put Vaughn in a German art installation that simulates a businessman’s hotel-office (please, don’t ask). In front of an audience, Vaughn takes calls and explains his job, going from reluctance to open participation. As long as he’s running his mouth and keeping his cool, he’s a star. Otherwise, a movie like this misses the point of Vince Vaughn. Even when it seems as though he’s being allowed to stretch, there’s nothing in the material to challenge him.

Until he has another shot to reestablish contact with a dark side (the late 1990s — Clay Pigeons, Psycho — seem like a hundred years ago), he’s languishing in generic straight man parts. As a comedic performer, he’s a hall-of-fame wingman. He either needs to find better, worthier experiments (like the upcoming second round of True Detective) or the movies need to let him fly again.