Death and the Collector: The Blinkered Music Geekery in ‘A Band Called Death’ 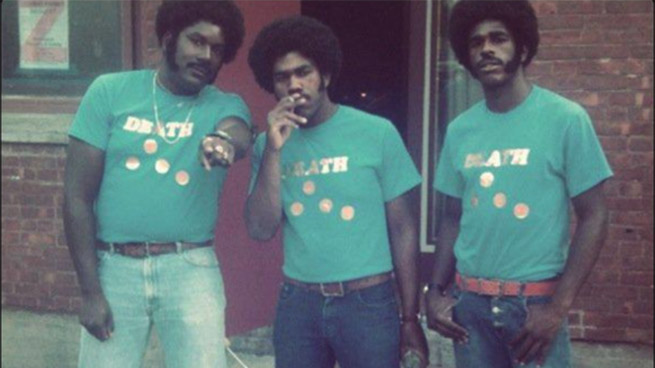 Over the weekend I watched the 2012 documentary A Band Called Death (now available on Netflix!), which tells the story of the titular band, a trio of black brothers from Detroit who may very well have invented punk rock in total obscurity in the early ’70s, several years before the world was introduced to the Ramones, the Sex Pistols, and the Clash. It’s a great documentary, if a little hyperbolically produced, and one walks away with a great deal of respect for the Hackney brothers and their family, who have made a kind of unfussy, spiritually fulfilling, and emotionally driven life out of the music they love to play.

The movie has two halves. The first covers the adolescence of Bobby, Dannis, and David Hackney, the formation of the band, and their years of struggle to get signed to a label before eventually dissolving and pursuing other projects; the second focuses on the rediscovery and evangelizing of the band in recent years by a community of obsessive record collectors and journalists, who built up the lore of the band via message boards and niche online publications. It’s here that the film’s lens becomes complicated — not only because the storytelling duties shift momentarily to a bunch of white, bespectacled alt-music tastemakers, but because the retroactive appreciation and coming into vogue of anything, especially a band as criminally ignored in its time like Death, generates a million little offshoots of critical bugaboos. The reigning sentiment as we ping-pong from talking head to talking head (the producers enlisted otherwise unaffiliated endorsers like Alice Cooper and Elijah Wood [??] to expound on the importance of Death, implying that the hour or so we spend hearing their story and music would not convey that importance alone) is disbelief at the band’s obscurity, while using that obscurity to bolster their own status as in-the-know dudes. To hear guys like Jello Biafra and Chunklet contributor Ben Blackwell talk about the urgency with which they felt they had to share the discovery of the band — whose ultra-rare EP ran for $800 on Ebay in 2008 — is at once understandable to any art obsessive and also makes one reexamine their own pop-culture proselytizing instincts.

It’s ultimately an altruistic impulse — see a nice thing, want for others to see the nice thing — and in many ways it’s what makes our cultural world go round. But just in laying out the bare facts, the film can’t help but highlight the disconnect between the current-day music community’s fetishization of Death’s ultra-rare (until Drag City reissued their LP … For the Whole World to See in 2009) output and the surviving members’ deeply complicated emotional history with their own music. Lead singer and visionary David Hackney died of lung cancer in 2000, too early to witness the band’s renaissance, and all the way up to his death he remained haunted by what he saw as a higher spiritual and musical calling, and tortured by a world that was not interested in hearing about it. The band reluctantly chose their name at the insistence of David, who had become obsessed with mortality and the afterlife as a teenager after the death of the brothers’ father, and the name could largely be seen as the reason for their early failure; pivotally, the brothers stood behind David and refused to change it when Clive Davis requested it as a condition of his continuing to fund their recording sessions.

The film gets much of its dramatic thrust from the mixed blessing of the indie music industry, which bears no resemblance to the one the Hackneys struggled through in the ’70s, suddenly deciding it’s Death’s turn to be cool after decades of obscurity and apathy. (Funny how the name that was once a curse became an irresistible calling card to a new denim-and-pin-clad generation.) David had predicted before his death that people would “come looking” for those old tapes, and when the prophecy comes to pass Bobby and Dannis Hackney visibly and audibly grapple, often in tears, with reviving a body of work that had been so unwanted for so long. Was it really in everyone’s best interest to humor the cool-seekers? Did the world deserve Death now, after sleeping on them for so long?

I could probably write a whole other piece on the irony that both in 1973 and 2008, Death’s fate rests in the hands of a bunch of white gatekeepers and their trend-chasing whims, a.k.a. nothing has changed. And maybe A Band Called Death is not the best example for the point I’m trying to make; not all discoveries are as singular as Death, not all artists as pure of vision (often to the detriment of their careers) as the Hackneys. Their rebirth is ultimately a net positive. But as feel-good as the movie aims to be, there’s a creeping implication that at the end of the day, those who profess to be the band’s biggest champions and who are in fact responsible for that rebirth still see Death and their story as an inert object, a known sum to be desired, discovered, hyped up, disseminated, and to serve as the password of the month for the speakeasy of one particular subculture. And for all the joy I got from getting to know the Hackneys over the course of the film, I walked away from it with an equal and opposite mistrust of music geek culture, and geek culture in general.

Pop geek culture is characterized by many things, but one is its disproportionate preoccupation with the mechanisms that establish a work’s status and mythos, over the study of the work itself. Geeks lean more toward iconography and social history than formalism. (Of course, a geek can practice both, but when they speak geek they tend to speak in the former, more relatable language.) Our current culture of more-more-more, whether you’re talking about Marvel spinoffs or True Detective dissection, is a natural byproduct of geek culture, because geek culture is fueled by logorrhea and accumulation. The record collectors who picked up Death’s flag were enamored not only of the music but of the process of privileged dissemination and dialogue they get to participate in when such a work is unearthed. Again, this is not an inherently bad thing, but it’s easy to miss the forest for the trees once you start playing this game. Blackwell explains his initial intrigue with the then-mythical Death 7-inch as a list of coolness qualifications: “So this 7-inch, it’s a limited press, it’s Detroit, it’s punk rock, it’s hard to find, and not a lot of people know about it. I mean, this hits all of my checklists, you know. This is something meant for me.” Taken out of context, maybe that sounds like typical spittle-sprayed fanboy-ese, but after the sobering tale of David Hackney and Death, it seems completely tone-deaf.

Neither he nor the handful of people in possession of the single could understand why nobody knew about this band, and set about making cassette and CDR copies and passing them along to their friends. If you’re a “music person” who’s been on the giving or receiving end of such a transaction, you know that it is informed by not a little vanity. You’re sharing something you like with someone you deem worthy of it, and by doing so you hope you will be associated in their minds with that cool rare thing they popped in their tape deck one afternoon. Ultimately, the collector’s story is a victory for them — they were the first to tell you about this band, they get the chyron in the Death documentary.

The parallel story to all this is that Bobby Hackney’s sons were also discovering their family’s punk past at the same time as everyone else, and had the same tell-all-your-friends instinct as the people dropping $800 on Ebay. Prior to the Drag City pickup, Julian, Urian, and Bobby Jr. started a tribute band of their father and uncles’ music named Rough Francis, after one of David’s pseudonyms. Bobby Jr. says, “We were almost musical missionaries for Death,” but what drove their passion was an entirely different alchemy than what was happening on the blogs. They played at dive bars and house shows, in a strange mirror image of the process bubbling up in the indie music press that would ultimately lead to the album reissue. When I say this is a parallel story, I mean strictly parallel — never do we see the Hackneys (either generation) cross paths or meet-and-greet with Blackwell or Biafra or Henry Rollins or any of the collectors trafficking in the currency of Death’s momentary cachet. Perhaps they have in real life since then, but as A Band Called Death tells it, these are two separate enterprises.

In a climactic scene, Bobby Sr. and Dannis go see a Rough Francis show in New York, and are overcome with emotion to hear the younger generation banging through “Freaking Out” and “Keep on Knockin'” all these years later. The reissue had already come out at that point, but one gets the sense that this is the real reward for the Hackneys, and it had nothing to do with the approval of Jack White or Pitchfork. They know, probably better than anyone else, that the geek machine will keep rolling, and find another hot rare thing to trump up and fill word counts with. And that makes them hipper to the cultural current than a basement of mint 7-inches ever could.