Last week, when the Cannes International Film Festival announced its main competition lineup, there were loud groans. Mostly, they came from my kitchen. The 18 films eligible for the Palme d’Or came from directors who are frequently, if not always, up for the Palme d’Or (Jean-Pierre and Luc Dardenne, Nuri Bilge Ceylan, Mike Leigh, Ken Loach, Atom Egoyan, Olivier Assayas, and David Cronenberg among them). The groan had nothing to do with the likely excellence of these filmmakers’ most recent offerings: A few of these men (there are two women in main competition) are some of the world’s greatest. The groan had everything to do with the predominance of old-guard Cannes and absence of any kind of new guard.

And this is what I’ve come to love about the Tribeca Film Festival: Its guard is overwhelmingly new, if there’s any guard at all. Yes, Chelsea Clinton produced a documentary here. And sure, Chris Messina directed his first feature. But as filmmakers, they’re nobodies. Tribeca 2014 kicked off a week ago, and over its dozen years of existence, it has forged an identity more interesting than “Sundance East.” Though I’ve yet to see anything here as great as the greatest of Cronenberg or the Dardennes, I’ve seen films by American directors — young(ish), not only white, not only male — that have that kind of promise.

Keith Miller practices a version of the Dardennes’ realism. His second movie, Five Star, prizes grit over gleam. He’s not afraid of humanity and its discontents. His film is a muted battle of temperaments between a midlevel drug-dealing gang leader named Primo (James “Primo” Grant) and John (John Diaz), the teenager he’s put on his payroll. John’s late father was a rival of Primo’s. Now John is trying to figure out whether he’s cut out for gang life. His mother (Wanda Nobles Colon) and his girlfriend (Jasmine Burgos) try pulling him in one direction, but there are undertows — the streets in general, and Primo in particular.

Grant is heavy-looking, heavily tattooed, and heavily bearded. Five Star opens with him behind the wheel of his SUV, delivering a monologue about the family time he missed in prison. And it’s unclear whether we’re watching a piece of fiction or memoir, but Grant’s charisma is an undertow unto itself. He speaks in a soft, clear, gentle manner. You’re looking for a menace but keep seeing a friend. Primo’s dangerousness is his interesting characteristic. You see him on the sofa with his kids or in bed with the mother of his children (Tamara Robinson) and feel his warmth. He works as a bouncer and wants to get off the streets.

John doesn’t take that warmth or Primo’s authority seriously enough, and that’s the most interesting thing about him. This collaborative conflation of the actors’ actual lives with manufactured drama produces too many scenes that feel overwritten and a movie that’s eventually overwrought. Five Star is a kind of crime-movie remix of Miller’s previous film, 2012’s Welcome to Pine Hill, in which a large black drug dealer and bouncer abandons criminality. This one is more assured. I’m excited to see Miller, who’s white and based in Brooklyn, explore more of the other side of being poor and of color in New York, without abandoning his good camera framing and sense of realism — to see what he can do beyond the trappings of guns and crime. He’s not the tragedian the Dardennes sometimes are. He appears to be more of a straight-ahead optimist. He should take that optimism as far as it can go.

Gia Coppola is also going for realism. In her first movie, Palo Alto, the camera watches a handful of young actors (including Emma Roberts and Jack Kilmer, son of Val) behave and misbehave. She’s taken the film from some of the adolescent stories in James Franco’s shorts collection. Presumably, they spoke to her, and what they said was “handsome fashion shoot.” This is a bunch of vignettes that lead nowhere interesting except for one scene in which Roberts winds up underneath Franco on his couch (he’s her soccer coach).

Gia is one of those Coppolas (Francis is her grandfather; Sofia’s an aunt), and, at 27, she’s as preoccupied with youth and young people as a few of her relatives notoriously are. I might have liked this movie at 14 or 15 years old, but even then I’d need something to hold on to. I’d need tension or girls with personalities. A teenager can smell the banalities here, too. Coppola’s got a dreamy sense of style. She’s also got a voice. But, at the moment, she’s not using it to say anything. If she has lived a life, it’s not evident in her filmmaking.

When old-guard talent does surface at Tribeca (half this festival, after all, is Robert De Niro’s), it tends to do so in and around the movies. Saturday evening, I had to wait to enter a screening in a theater attached to Stuyvesant High School because there was commotion on the red carpet. You’d like to think it was for a starlet. But it was for Quincy Jones. He didn’t cause chaos or traffic, just a lot of enthusiastic gawking. Jones signed autographs and posed for pictures with Justin Kauflin, the 28-year-old blind jazz pianist who’s the co-subject of Keep On Keepin’ On, one of those documentaries that makes you turn to the friend seated beside you and rub your hand over your heart.

The film’s subject is Clark Terry, the trumpeter and jazz legend who’s been laid up with diabetes-related health problems for the last few years. Terry is 93 now and came up through Duke Ellington. In turn, Miles Davis, Jones, and Herbie Hancock came up through him, as did scores of other musicians, including Kauflin and the film’s director, Alan Hicks. Hicks focuses on the three or so years Kauflin spent visiting Terry and his wife, Gwen, at their home in Pine Bluff, Arkansas. Terry undergoes surgeries while Kauflin tries to get his career off the ground. The bond between these two is real and truly deep. When the kid drops by, the old man lights up. 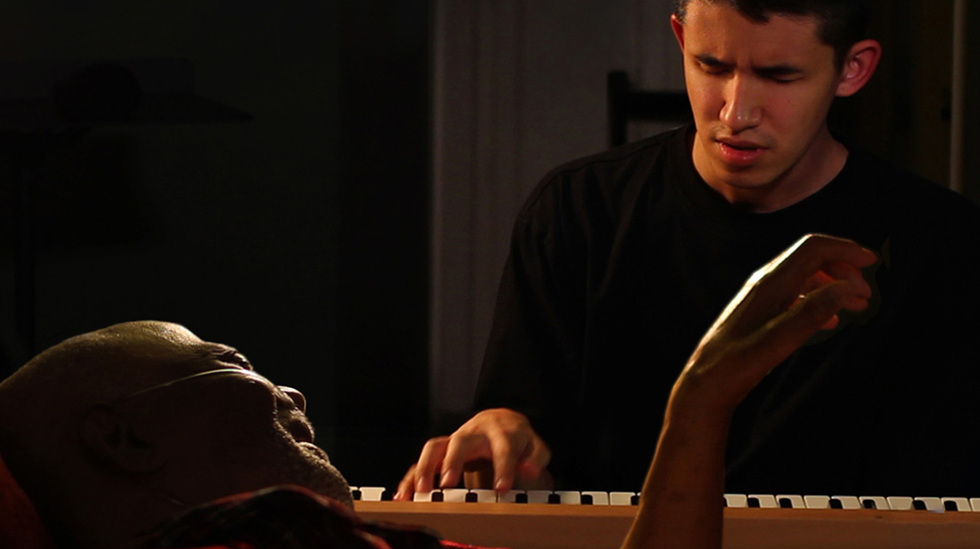 The movie’s shaggy and the continuity is confusing, but all of Hicks’s instincts are right. A lot of directors would have focused solely on the present and Kauflin’s story. But it helps that Hicks studied with Terry; he knows his subject. The film situates him within both the worlds of jazz and music education. He also knows he’s got a great cast of uniquely entertaining personalities — including Gwen and Kauflin’s mother. Mostly, though, he’s got these two men who refuse to give up on themselves. The title isn’t a joke. Terry wants to live, and live he does — through Kauflin and Jones and Hancock, through anyone lucky enough to spend even an hour with Terry. That now includes me, and, once this movie gets the distributor it deserves, it should also include you.

Art and Craft is also too good not to have distribution, which is why Oscilloscope is putting it out later in the year. This is one of those documentaries with its own kind of practical magic. Directors Sam Cullman and Jennifer Grausman find Mark Landis, an art forger who has conned 46 museums in 20 states with more than 100 pieces of replicated art. It’s a two-character study — the other is Mark Leininger, a duped Cincinnati museum registrar aggrieved that Landis conned him — writ as a kind of dour cat-and-mouse comedy.

Since Landis doesn’t accept money for the paintings, which he passes off as donated heirlooms, his forgeries are extralegal. What interests the filmmakers is why this frail-looking, late-middle-aged man, who’s clearly mentally ill, enjoys the con. They have a terrific eye for comedic detail. Some of that comedy comes from the obvious pleasure Landis takes in the lowbrow recipes he’s concocted for his copies. The opening shot has him stalking into a Hobby Lobby for supplies, and to age the wood frames, he applies coffee. What arises are real questions about the nature of art, the limits of intellectual competence, and the exact moral crisis at the heart of Landis’s hoax. His fakes are both fraudulent and vividly real.

Realness is at the heart of Mala Mala, too. It’s a series of interwoven documentary profiles of Puerto Rican men living in various degrees of transgender identity. Those degrees are very different. You’re nervous the film’s directors, Antonio Santini and Dan Sickles, are going to go for opera and music-video glamour — and they do, but they never risk turning these biological men and the single biological woman into weirdos or freaks.

Their movie is a landmark of real philosophical, existential, and ontological inquiry. It’s delicately made and deeply considered. The filmmakers watch as a couple of these women either work as prostitutes or distribute condoms to sex workers. No two of these people feel the same about their transitions. Not all of them suffer from gender dysphoria; not all of them want to live full-time as women. Alberic Prados concludes he’s merely a drag queen, while Soraya Santiango Solla, the eldest of the film’s subjects, doesn’t believe that many transgender women are prepared for the realities of womanhood. They want a fantasy. They want youth.

This is one of the richest, most emotionally complicated portraits of identity I’ve ever seen. It’s got great siblings in Jennie Livingston’s Paris Is Burning and David LaChapelle’s Rize, other empathetic journeys into underclass subcultures. One difference is that the men and women in those movies knew they were stars, tragedy be damned. It’s only once the women in Mala Mala get a sense of their political strength that their natural power seems to acquire meaning. They surprise themselves. This is one of the strongest movies at Tribeca, and it would be a huge hit at Cannes, if only it got the chance.

Death and the Collector: The Blinkered Music Geekery in ‘A Band Called Death’