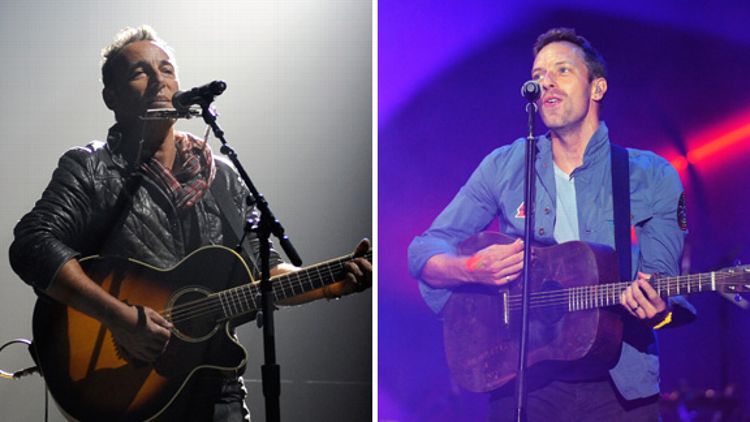 A headline from Sunday’s New York Times “Arts & Leisure” section: “Chris Martin of Coldplay Asks: What Would Bruce Do?” In the article, Martin explains he’d been “watching a lot about Darkness on the Edge of Town” and other “real albums” in preparation for Coldplay’s latest, Mylo Xyloto; he also calls Springsteen, along with Jagger and Bono, one of his “great teachers.” So Martin’s caught the Bruce bug! It’s really been going around. In the last five years or so, both pup bands like the Gaslight Anthem and the Hold Steady, as well as megastars like Lady Gaga and the Killers, have recorded albums inspired by Bruce (reportedly, at some point during the Sam’s Town promo tour, for a minute or so, Brandon Flowers actually managed to convince himself he was Bruce Springsteen). Now, it’s Coldplay’s turn.

Does Mylo Xyloto (it’s out next week, but leaked yesterday) actually sound like a Springsteen album? No, not really. (Our high-level critical analysis: it sounds like a Coldplay album). But Bruce’s name has been invoked and it’s now forever part of the marketing and message of Mylo Xyloto. But here’s the question: is Chris Martin doing it right? How should he — along with the rest of his Boss-revering brethren — be co-opting Bruce Springsteen? A few rules:

1. Don’t already be famous.
The Hold Steady released their fantastic first two albums Almost Killed Me and Separation Sunday in 2004 and 2005. They were still under the radar then, but the Bruce comparisons started immediately, and rightfully so: front man Craig Finn was writing overstuffed songs about restless kids in dead-end towns. Except his lyrics were much, much jokier (“Mary got a bloody nose from sniffing margarita mix”) and not nearly as hopefull (“Half the crowd’s calling out for ‘Born to Run’ / The other half’s calling out for ‘Born to Lose’ … / … We were born to bruise.”) By 2006’s breakout album Boys and Girls In America (the band’s most Springsteen-y record yet), though, Finn was doling out happy endings, or at least ambiguously non-terrible ones. (He was also actually trying to sing). Which meant that, by the time most people started paying attention, the Hold Steady had two albums worth of glowing reviews under their belt — all of them positively referencing the Springsteen influences.

With the Gaslight Anthem, it was even more of a no-brainer: they write earnest songs about meeting by rivers and driving around in cars with girls named Maria. And their front man, Brian Fallon, has one hell of a drawl/rasp thing going on. Also, they’re from New Jersey. Considering they also mimic Springsteen’s song sprawl at times (the Hold Steady go for more of a concise, cock-rock vibe), Gaslight got more shit for their indebtedness. But ultimately, most agreed that if two acts were going to try make careers by sounding like the same artist, at least Bruce Springsteen was a pretty good choice.

This is a tough one for Chris. It’s hard to just start sounding like Springsteen five albums into a career. But there’s hope!

2. If you’re already famous, keep quiet.
In 2004, The Killers released their debut album, Hot Fuss, a perfectly adequate, radio-beloved collection of glitzy heartbreak pop. But for the sophomore album, Brandon Flowers decided he wanted to write the Best! American! Rock n’ Roll Album! Of All Time! For 2006’s Sam’s Town, Flowers incessantly dropped the Boss’s name while doing some seriously ballsy shit-talking (Like: “This album is one of the best albums in the past 20 years.”) Sam’s Town was not a commercial failure, but Flowers was ridiculed, and overall the release put a serious dent in the dude’s momentum. (A good amount of the swag was reacquired with 2008’s dancier Day & Age). But here’s the thing: “When We Were Young” is, in fact, an excellent aping of “Born to Run”. At the end of the day, Sam’s Town was unfairly judged by Flowers’ histrionics.

And if he had kept his mouth shut? He might have had Neon Bible. Arcade Fire’s 2007 sophomore album was also something of a departure from their debut, and arguably no less influenced by Springsteen than Sam’s Town. (Bruce probably shook an angry fist at the sky when he first heard the title “Keep the Car Running.”) But Win Butler let his blue-collar arena-rock jams do the squawking, and the band avoided plagiarism charges. Last year’s The Suburbs again cribbed Springsteen’s whole “voice of real America” thing, and that won Arcade Fire the Grammy for Album of the Year.

Elsewhere, Lady Gaga handled her own Bruce tribute with a level of grace somewhere between that of Win and Brandon’s. For Born This Way, Gaga bought some E-Street Band vibe by straight-up hiring Clarence Clemons to play the saxophone. The entire “Edge of Glory” video is Gaga twirling around while Clemons chops off on a stoop. But when Clemons unexpectedly passed away during the album’s promotional cycle, Gaga paid her respects and got the hell out of the way.

So far, Chris hasn’t been too heavy-handed with the shout-outs, but we will continue to monitor the situation.

3. Don’t be a Republican.
Bruce is not cool with conservatives trying to latch on: First Ronald Reagan, then New Jersey governor Chris Christie got the gas face. Luckily, Martin’s in the clear on this one: They don’t even have a Republican party in England, just a bunch of Lords and Labours and scones.

4. Get the co-sign.
Bruce, it turns out, is a pretty nice guy. How nice? He not only let Brian Fallon come sing “No Surrender” with his band at a show, he actually joined Gaslight Anthem for their song “The ’59 Sound.” (It doesn’t really seem like he knew the words, but who cares, right?) He’s also played “Keep the Car Running” with Arcade Fire, and let them play “State Trooper.” And when the Hold Steady showed up for a Bruce tribute, they ended up doing “Rosalita” with the man himself. Even Brandon Flowers got to sing “Thunder Road.”

Coldplay has not yet rocked with the Boss. But if you plan on bringing him up in more interviews, Chris, a duet is a must.

Mick Jagger and Martin Scorsese Team Up With HBO, Cocaine