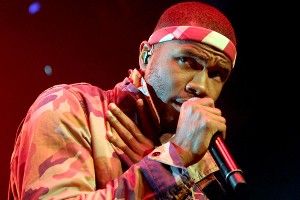 You couldn’t have scripted this better: On Sunday night at Los Angeles’s Westlake Studios, Chris Brown, arguably the most media-reviled figure in pop music, got into a fight with Frank Ocean, arguably the most media-beloved. And while hearing the factions involved may lead you to immediately ascribe the brawl to a clashing of the value systems the two R&B stars willingly or otherwise represent, it appears, at this point at least, that it wasn’t all that heavy. More specifically: Brown and Ocean may have been fighting over a parking spot.

TMZ reported the news via “sources connected with Chris,” and, surprise! — those sources say Frank started it: “As Chris went to leave [the studio], Frank Ocean and his crew blocked Chris from leaving. The sources say Frank said, ‘This is my studio, this is my parking spot.’ We’re told Chris went to shake Frank’s hand … and that’s when one of Frank’s people attacked Chris … one of Chris’ friends jumped in front and hit Frank’s friend … Frank then came at Chris … Chris pushed him away and they started brawling.”

Anyone else in the situation, you give him the benefit of the doubt when he says he didn’t start anything. Chris Brown? Not as much. And not helping Breezy’s point of view here is, (A) the fact he had his publicist or driver or personal omelet chef or whoever call up TMZ five minutes after this happened, and (B) the fact he didn’t stick around to talk to the cops. As TMZ explains, “[LAPD] refer to Ocean as ‘the victim’ because he’s the one who stuck around and spoke with police. Ocean [also] said the fight started over a parking space … and Brown punched him. There were six people involved in the fight.”

Ocean also tweeted, “got jumped by chris and a couple guys. lol. i only wish everest was there” and “cut my finger now I can’t play w two hands at the grammys.” This being Frank Ocean, I assumed Everest could have referred either to a security guard, an imaginary friend, or the actual Nepalese peak. Turns out, Everest is his Bernese mountain dog, which is both more sensible and more adorable.

Meanwhile, Brown, apparently learning from past incidents, stayed off Twitter altogether. (One of his last tweets before the incident was an MLK quote: “I have decided to stick with love … hate is too great a burden to bear.” Read that as you will.)

Brown and Ocean may or may not have had some bad blood for a while. If you’re interested in giving away 36 seconds of your life, I can direct you to a video that purportedly depicts Brown’s cousins making angry gun noises at a preternaturally calm Frank. And then there were the reports that Brown, never exactly a poster boy for acceptance and rational thinking, used a homophobic remark upon hearing that Ocean’s first love was a man. According to Brown, that never happened: “My Opinion on the whole Frank Ocean subject is ……… Love who u wanna love. It’s ur decision. People stop searching for BS.”

After first seeing the TMZ headlines, that’s got to be where a lot of people’s heads went: Chris Brown must have said something horrible and homophobic to Frank Ocean. Why else would they fight? There’s some small solace that, at least right now, neither Frank nor anyone else is saying that’s what Chris did.

Unless security camera footage leaks, most people are going to go ahead and assume Brown was the aggressor. There have been too many incidents — let us never forget “I’m Still Fucking Rihanna”-Gate — to think otherwise. So, yeah, scuffling with Frank Ocean — and he possessive of both of the nearly unanimous best album of 2012 and a gentle, kind, and truthful soul — won’t help Chris Brown’s rep in the slightest. But at least the brawl will lead to a conversation about Brown’s continual inability to stay out of trouble and the aggressive, petulant way he handles his many incidents, or how hard it is to find parking over by the Westlake — and not, as many of us probably assumed, about an ugly bout of homophobia.

Afternoon Links: People On The Internet Have Opinions About The 2013 Coachella Lineup