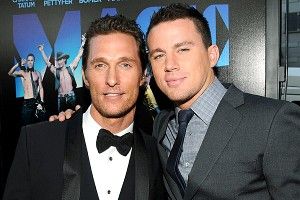 With only a few days to go before the release of Magic Mike, Channing Tatum has spoken out against dastardly accusations leveled at him by his former exotic dance colleagues, Thomas “Awesome” Austin and London Steele, that the stories of — and, much worse, the dance moves contained within — the bare-chest bonanza were stolen.

As TMZ first reported, Steele and “Awesome” Austin worked with Tatum at a club in Tampa, Florida, and declare that “the film is based more off their lives than his … even down to the title — Magic Mike — which is a name Austin says he coined for another dancer. ‘Awesome’ Austin tells TMZ … he and his former male dance buddies are a like a ‘brotherhood’ and, while they’re happy for Channing’s success, they feel betrayed by the actor for not involving any of them in the film. They claim they took Tatum under their wings when he was a nobody and taught him all their special stripper-moves like ‘The Hot Seat’ — which is featured in the film and Austin says he invented it … [Austin says that Channing] ‘only danced for 4 months. How many events could have happened to him?'”

After that bombshell dropped, Tatum stayed mum, and his silence rang as loud as thunder. From Step Up 2: The Streets to The Vow, Channing Tatum has proven himself an upstanding citizen and a fine actor/dancer. But with no words on the issue from Chan himself, there was no recourse but to consider the fact that, devastatingly, the allegations could be true. Is it possible he really did turn his back on his old stripper world while simultaneously exploiting it? Would he have gone so far as to brazenly hijack proprietary stripper-dance moves? Could Tatum have, in a blind, scorched-earth dedication to create the most accurate representation of the male stripping world yet committed to screen, so callously screwed over his old pals? And could we, the audience, in good faith enjoy seeing Matthew McConaughey march around like a sexy Willa Wonka knowing the Nazi-Gold-esque machinations going on behind the scenes?

Thankfully, Tatum has finally provided his side of the story. And just in the nick of time, with that Magic Mike release date looming, our faith in Tatum has been restored. He explains:

Those guys have been trying to make money off of me since I got into this business … Look, there’s nothing that’s factual in this whole movie other than that I was an 18-year-old kid and went into this world and I dropped out of college from playing football and was living on my sister’s couch … There’s not one character that I took from my real life; this is just a world that I went into, and I had a perspective on. And we created everything from a fictional place … I don’t want to say anything bad about [Steele and “Awesome” Austin] because they’re part of the reason why I think this world is so interesting. They’re very interesting, intriguing and bizarre characters, and I’m thankful for weird people out there. They’re some of the most creative people.”

OK, take a minute. Breathe deep. Relax. And then go enjoy the various exposed butts of Magic Mike with a clear and clean conscience.

True Blood Season 5, Episode 3: 'Whatever I Am, You Made Me'