True Blood Season 5, Episode 3: ‘Whatever I Am, You Made Me’ 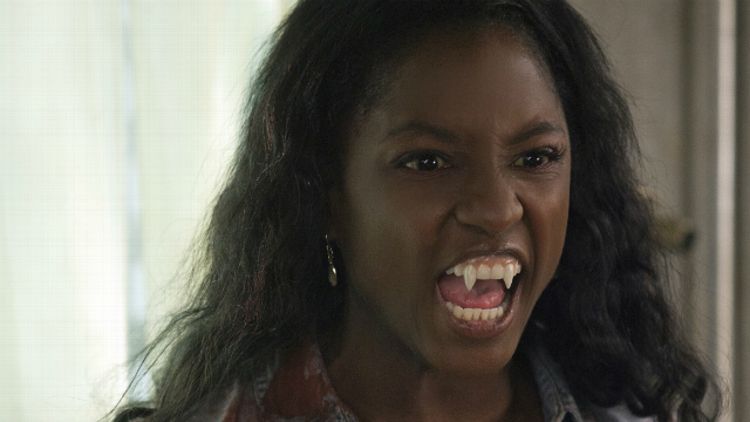 Tara wakes up in a supernatural forest whose filter effects are shockingly similar to those of last season’s fairy world. She stares at her hand, which is usually what people do in a fictional situation to establish that they are on psychedelic drugs. Considering how horrible Tara’s story lines usually are, it seems like things can only get better.

Sookie and Lafayette bound into the foggy terrain with flashlights like Mulder and Scully, calling for Tara, telling her that they’re only trying to help her. A hilariously naive girl changing her tire with a side ponytail splits her nail (“MY NAAAAAIL”) and asks Tara for help. Tara fangs out instead. Except: credit sequence fakeout! Tara still has a conscience somehow, and decides to spare the girl’s life.

“How does this keep happening?”

Back at the AUTHORITAY, which resembles a high-end furniture stockroom, Bill and Eric are still chained together on their knees. The conservative lady, the child in a suit, and Christopher Meloni debate Bill and Eric’s fate. Meloni explains that Russell Edgington is now the Che Guevara of the Sanguinistas movement. Then he slowly humps a fridge full of True Blood beverages. Meloni demands the new Nan Flanagan, and we are greeted with …

Steve Newlin! Looking like a young Pete Campbell. Sookie seeks Pam at Fangtasia, where Pam commands the crowd in a leather bodysuit looking like “Toxic”-era Britney. She lets it spill that Eric and Bill are both missing. Sookie, who made the decision to end their love triangle by dumping them both, now has to make like she hasn’t been wondering what they’re up to nonstop ever since. Pam sees Sookie as a dumb freshman girl that her male friends like just for her youth, lack of jadedness, and general non-vampire otherness. Pam is like “Bitch, this is senior prom. Your kind is not welcome here!”

“Why yes, the pants fit perfectly, thank you.”

Sookie hits Pam with a burst of FAIRY POWER, throwing a drink made of sparkly rainbows in her face. At Merlotte’s, Sam is cleaning up when he senses something in the bushes. The rustling turns out to be desperately hungry Tara, begging Sam for help. At the Authority, Meloni is giving Newlin his orders to take out Russell. Newlin makes fun of how emotional and stupid humans are. Ha-ha, dumb humans, always talking and wanting stuff. Meloni negs Newlin into admitting that they were both humans originally and should treat them with the proper respect. Meloni makes the announcement that Young Money ain’t going to play Summer Jam.

Bill and Eric line up and take their shirts off to be outfitted with vampire security harnesses. They’re like those alcohol level monitors, but with more of an S&M chest piece look and feel. At Merlotte’s, Tara is sucking down bottles of True Blood and getting synthetic blood all over her jean jacket. She passes out on her stool and Sam Merlotte has to carry her out, because even as a vampire Tara is somehow rendered a helpless victim of violent circumstance.

“They can chew you up, but they gotta spit you back out.” — McNulty

At the police station, Frank Sobotka’s underlings are chuckling over a naked photo of their boss on Facebook. Frank doesn’t like being objectified without his consent, and all but slaps the laptop out of their hands. Jason Stackhouse is comparing brands of relish (“crunchy or sweet?”) at the A&P when his former teacher Anna Draper recognizes him! Anna Draper didn’t die in San Pedro in 1965, she just abandoned her life to take on a new identity in Bon Temps. They make grocery store aisle eyes at each other in a way that implies she Mary Kay Letourneau’d him at a very young age.

In the kitchen of Merlotte’s, Arlene is trying to get Terry to tell her what the hell happened when they were in combat. She is very serious, but also wearing a studded turquoise fanny pack. Terry says he’s going off with Noel from Felicity, but that he can’t tell her where or why or for how long. Arlene tries to stuff her sorrows into the fanny pack, but can’t help bursting into tears.

Sookie confronts Sam, hoping he’ll give up Tara’s whereabouts. Sam tries to block Sookie from reading his thoughts by clogging his mindstream with comments about Sookie’s boobs and perfume. His brain wanders and quickly reveals that Tara is in the walk-in refrigerator. Anna Paquin is looking especially like Rogue in this scene. Sam protected Tara because he feels guilty his own shifter brother is now dead. Sookie lets him snuggle up to her white T-shirted bosoms.

SWEET, it’s another Pam flashback. Madam Pam shows client Eric some of the wares at her San Francisco cathouse. Eric wants Pam, no substitutes accepted. While Pam’s vanity might be flattered, she wasn’t born yesterday. She thinks back to the hooker that just got murdered and wonders whether the smooth-talking tall blond now trying to buy her for the night might have been involved.

Bill is eating a courtesan while his maker Lorena sits nearby and backseat drives their victim’s verbal degradation of herself. Eric walks in just as Bill bites in. Turns out Pam’s flashback is also a backdoor flashback to Bill and Eric’s first encounter. Lorena holds Eric off from murdering Bill. Bill and Eric! Always fighting over some chick! It’s like it almost doesn’t even matter who the chick is, as long as she has some kind of supernatural power (and a hot bod).

Lorena convinces Eric to chill. Eric is jealous of Bill’s youth in vampire years and closeness to Lorena, but I’m betting Bill is equally jealous of Eric’s height and experience. Eric celebrates by making out with Pam, who cries a blood tear thinking about how there was a time when Eric favored her over everyone and everything else, and Sookie wasn’t even a country-fried zygote yet.

Will Anna Draper cougar grift Jason Stackhouse like she did Dick Whitman?

At Anna Draper’s house, Jason is petting on Prince Charming, her cat. They are drinking out of cat mugs and the décor is all very pastel feminine shabby chic. You know what that means. She’s probably a hell demon. She is divorced, and she bonds with Jason over their lack of luck in love. She apologizes for inducting him into manhood so early. He says he has no regrets, seeing as how it’s the only discipline he’s ever aced in his life.

Debbie’s parents pester Alcide about their daughter never making it back to Jackson for the holidays. He admits to having “abjured her,” and they intake breath sharply with a sound effect so we see that it’s super-serious. He thinks that Debbie just broke her V sobriety and ran off, but since her wallet showed up her parents believe she is dead.

“This is the face I always make when I’m telling the truth.”

Sookie tells Sobotka she has no idea where Debbie is. Have we discussed the fact that Sookie is kind of a murderer? Who knew she was going to go all Tony Soprano on us in these later seasons? Sobotka grills her while some blues guitar plays in the background, and if I squint my eyes just enough I can pretend I’m watching The Wire. Crime boss Sookie tells Lafayette to stop snitching and keep the gears humming with his trademark sassafras.

Sobotka turns a routine murder Q&A into asking Holly the Witch to go steady. Anna Draper is super-stoked to have boned Jason again now that he’s of age, but Jason looks like he is having second thoughts, specifically about vampire Jessica. Jason doesn’t tell her he was just using her to clear his dick-palate. She looks super-duper sad.

At the Authority, Salome is giving Bill a tour of the Tunnel. She was traded into sex slavery as a teenage virgin and says vampires are far less brutal than humans. The Authority would make a sweet industrial band. Bill and Salome have incredibly solemn sexy banter. Don’t these people ever make jokes? Like actual jokes, not vampire in-jokes? Bill does Salome against the wall, because sure.

“Whoops, I have feelings despite my hilarious bitchy exterior.”

At Fangtasia, the heretofore unthought-of pairing of Pam and Hoyt materializes when Hoyt shows up in full gothic regalia, cruising for vampire sex or maybe looking to convert himself into a vamp. Pam warns him how desperate he looks, then flashes back to her first night with Eric. Turns out Eric dredges up Pam’s soft side. She begs him to turn her so that they can be a power couple. Pam gives a little sad speech about how she’s destined to die alone in the dark from syphilis if he doesn’t make her immortal. Eric has vampire commitment-phobia; he’s not sure he wants to deal with being her maker. Pam cries and turns around to show that she’s attempted suicide. Eric, empathetic Aryan that he is, is forced to turn her.

In chancellor Salome’s boudoir, she and Eric talk about his sister Nora being on the chopping block and do a vampire take on Cruel Intentions. Doesn’t anyone ever laugh on this show? Or have uneventful, pleasant sex? No? OK. The Texan chancellor suggests Nora is in an ATL Twins situation with Bill and Eric, then light-boards her until she breaks.

Jessica tells Jason about the other dude whose blood she just wanted to suck, which he reacts to by getting kind of turned off when she tries to make out with him. He tells her that doing it with Anna Draper made him realize that he’s been a sex addict all these years, trying to fill a gaping hole in himself with women. Jess says they should just hang out, but Jason is adamant that he can’t be friends with women when he’s interested sexually. Jessica promises to put on sweatpants if he’ll stay.

Lafayette feeds Tara some True Blood in the meat locker. Sookie lies to Alcide about her knowledge of Debbie. Vampire Tara threatens to spill Sookie’s secret about Debbie’s death, then storms out. Bill and Eric are wearing special Authority sweatsuits and coyly alluding to their new shared lover’s sexual prowess. Meloni interviews Salome in her special victim’s unit while she lounges on some silk pillows. He says that Nora confessed.

Christopher Meloni kills it by taking this silliness extremely seriously. He is a middle-of-the-aisle mainstreamer. Salome gestures with her breasts while arguing her point. Meloni has some guns! Lafayette gets possessed by a blue devil that makes him pour bleach in the gumbo, but realizes it and pours it out, horrified. Sookie cops to Debbie’s murder, which kinda stops Alcide’s big ol’ crush on her. Tara breaks into a tanning salon to fry herself, prompting maker Pam to call her a “stupid bitch.” Until next week!