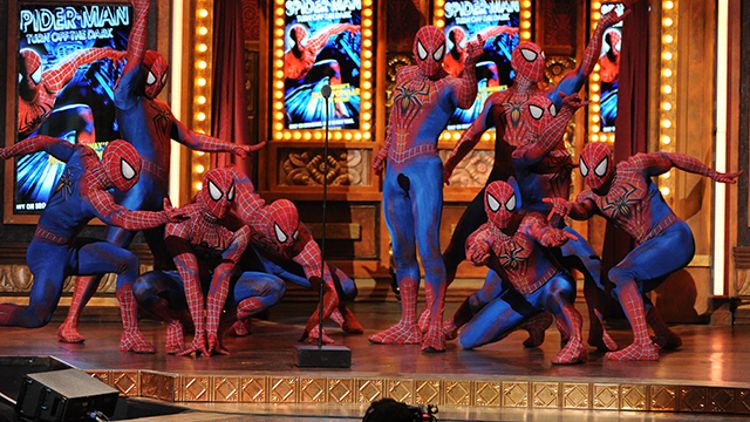 In the early days of production for Broadway’s Spider-Man: Turn off the Dark, all that anyone wanted to talk about was happening behind the scenes. Bitter creative conflicts were splitting the team behind the show, with theater vet Julie Taymor on one side of the juicy beef and U2’s Bono and The Edge on the other; meanwhile, the show itself, according to reviewers who’d checked out its interminable previews, was a confused mess, ambitious to a fault, with all of its lofty aspirations crashing down on itself. Eventually, people started paying attention to what was happening on the stage — but that was only because that included life-threatening injuries. In December 2010, after a rash of more minor incidents, a stunt performer, Christopher Tierney, fell more than 20 feet when a safety tether was not properly attached. He eventually recovered, and actually even returned to the show. Weirdly enough, that mimicked the show’s health as well: After booting Taymor and scaling back ambitions, Spider-Man managed to become a huge (albeit expensive) hit, and has been steadily stacking paper for years now. Then, on Thursday, the bad old days made a return: Daniel Curry, a dancer in the show, was injured when his leg, according to the New York Times, “was caught in a piece of the show’s technically elaborate equipment.”

The Times continues: “One audience member, Melissa Kessler, said in an interview … that Mr. Curry’s leg appeared pinned in a trap door that appeared to have closed shut. (The show uses automated equipment.) Mr. Curry began screaming, she said, and crew members took the stage to help him. ‘The floor looked completely closed on his leg,’ said Ms. Kessler … ‘They brought out a privacy screen and a lot of people on stage started getting things going. A stretcher was brought out, they were using a saw to cut a hole in the stage floor.'” There is no word on how the dancer is doing but, according to a spokesperson, more information will be made available today.