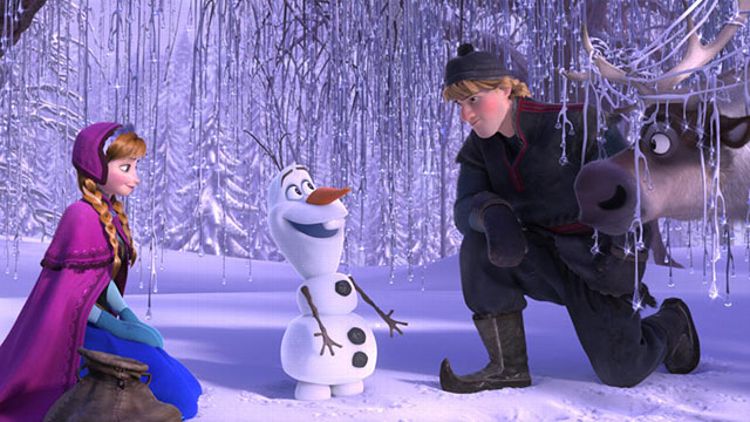 Can Disney (which owns the good ship Grantland) keep Frozen in theaters until a Despicable Me 3 or another Pixar flick rolls into town? Because families will clearly keep patronizing Frozen until then, absolutely no questions asked. This movie has not only overthrown Ms. Katniss Everdeen in The Hunger Games: Catching Fire‘s third week back in early December, but now it has also toppled the holiday season’s champion, Mr. Bilbo Baggins, after The Hobbit: The Desolation of Smaug enjoyed three weeks at the top. And that return to the no. 1 spot after six weeks in theaters, by the by? “Virtually unheard of,” writes The Hollywood Reporter. Plus, “Frozen is now the most successful title of all time from Disney Animation Studios after The Lion King.” And it’s the fourth-biggest animated film ever.

A newbie in the top five! Not a surprising one, though — everything in this “we found some creepy footage of nothing in particular” franchise has debuted near the top. Still, Paranormal Activity 4 premiered to $29 million in 2012, and the third one, when folks were still super into the series, opened at $52.7 million in 2011. It didn’t help that overall moviegoing was down this weekend thanks to inclement weather (snow, temps that made hell sound tempting).

Ah, what more can one say about The Desolation of Smaug? Some people are still seeing it? Oh, how about this: Peter Jackson’s fifth spin through Middle-earth is standing at $756.6 million internationally after four weeks in theaters, meaning it might have a tough time reaching The Hobbit: An Unexpected Journey‘s $1.01 billion mark?

This weekend, Martin Scorsese’s latest earned $26,482.21 for every utterance of the word “fuck,” a term that is deployed a record-breaking 506 times in the three-hour saga of greed and Quaaludes. The film’s total haul stands at $125,098.81 per “fuck,” an impressive figure. The Wolf of Wall Street has yet to open abroad, so international “fuck”-based grosses will be indeterminable until a future date.

Hustle and Wolf did the ol’ fifth-place switcheroo this week, although it was close. Soon we’ll start seeing if awards season can keep these two competing for dollars as well as statues.