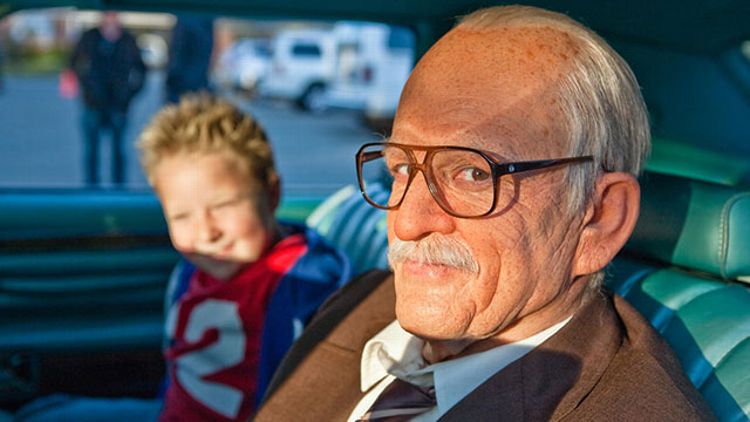 I finally saw Alfonso Cuarón’s 3-D IMAX adventure this weekend, hoping that throwing all my allowance at that pricey ticket would impede this fate. But the Jackass brand is too strong, with Bad Grandpa knocking Gravity off the summit just before a beautiful, original, non-sequel, non-superhero movie could spend a full month reigning hard. That said, I get it — the Jackass movies, dumb or not, are a reliable blast of group laughter. Also, factoid alert from Box Office Mojo: “Moviegoers have clearly shown an appetite for comedy this year. Bad Grandpa is the fifth live-action comedy to open over $30 million in 2013, and that list doesn’t even include We’re the Millers or This Is the End (which burned off demand with Wednesday openings).” 2013: The year we needed the laughs. Pick a reason.

As we pat Cuarón on the back and apologize that his fine film has lost to a movie about a pretend-grandfather getting his dick stuck in a vending machine, we can also congratulate Cuarón for making what is now the ninth-highest-grossing movie of the year. It’s also nice that Gravity’s worldwide haul is $364.2 million. Cuarón’s going to have so much goodwill going into his next project. I can’t think about it too much or I’ll freak out.

Tom Hanks, America’s Cap’n, is holding steady in the middle of the pack. One more week in the top five and he gets to meet the admiral.

Now we’ve got a number for exactly how many people had to see exactly how 80-year-old Cormac McCarthy’s first movie script would turn out: $8 million worth of people. It’s kind of weird that Ridley Scott, Brad Pitt, Cameron Diaz, Penelope Cruz, Javier Bardem, and Michael Fassbender couldn’t bring out more fans than this — especially when said fans had more than 3,000 theaters to choose from — but that’s the way The Counselor crumbles. Semi-disastrously.

There it is, folks — Cloudy 2 has got 100 million American dollars. In other news, Despicable Me 2 passed the $900 million mark worldwide this weekend. Yowza.

It still came in no. 6 in this week’s top 10, but Carrie’s box office is essentially done. This was the last weekend to see a horror movie in theaters before Halloween, and almost nobody cared.

The bump from 19 to 123 theaters was all Steve McQueen’s widely admired slavery drama needed to crack the box office top 10, landing at no. 8. The film’s slow rollout to a wider release has us all curious how it’ll do in the larger fray. “The studio says it’s playing well in art houses, African American theaters, as well as in mainstream multiplexes in markets LA, NY, Atlanta, Wash DC, Chicago, Toronto, Dallas, Houston, Baltimore, Philadelphia, Boston and Detroit,” Deadline reports. “Next week it adds 45 new cities and will increase theater count to over 400 locations across North America.” Watch your back, Jackass.

The Best of Grantland Pop Culture Podcast: 12 Years a Slave, Hello Ladies, and The Challenge