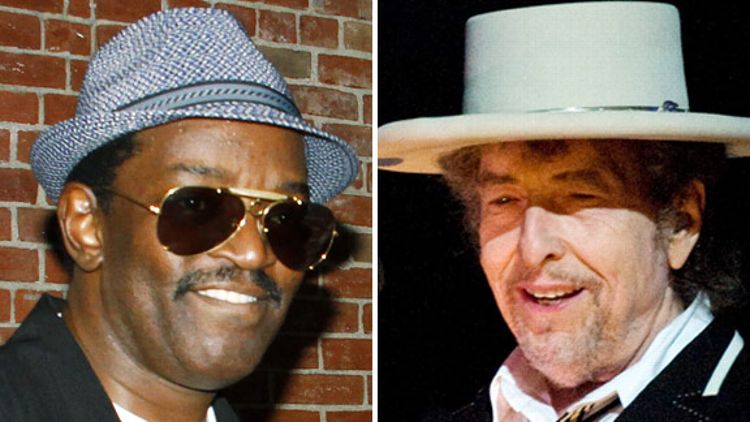 Bob Dylan can add another line to his extensive CV: (alleged) art plagiarist! Last night, ArtsBeat brought to our attention Internet grumblings about an exhibit of Dylan’s paintings, “The Asia Series,” currently on display at the Gagosian Gallery in New York. According to the gallery’s official description, the paintings are based on Dylan’s travels “in Japan, China, Vietnam, and Korea” and are billed as “firsthand depictions of people, street scenes, architecture and landscape.” It turns out, though, that some of the paintings are actually faithful copies of old photographs. For example, here’s one that knocks off a 1950 Dmitri Kessel photo of three dudes playing Siamese chess. (The fan site Expecting Rain has a bunch more.) Whoops!

In response, the gallery has released a statement: “While the composition of some of Bob Dylan’s paintings are based on a variety of sources, including archival, historic images, the paintings’ vibrancy and freshness come from the colors and textures found in everyday scenes he observed during his travels.” (OK, sure — but, like, they’re mostly based on the photographs, right?) Bob himself hasn’t responded yet. But whatever excuse he comes up with, maybe he can lend it to hip-hop historian Fab Five Freddy?

Earlier this week, charges surfaced that Freddy himself borrowed uncredited source material for a painting exhibition — namely, from the artwork of graffiti artist SEVER. According to SEVER’s pal Revok1, “that shit Fab-5 tried to present in a gallery as ‘original art’ isn’t original. Fab’s ‘art’ is composed entirely of stolen bits and pieces from my friend SEVER’s art … SEVER is a world renown & globally recognized & respected graffiti artist I bet ‘King FAB 5’ doesn’t even know who SEVER is and stumbled across SEVER‘s work doing a google search FUCKING PATHETIC.” (Idiosyncratic grammar aside, these allegations hold up to cursory Internet searching.)

Of course, the line between inspiration and appropriation is a thin one, and full explanations will probably never be offered. Still, though — art plagiarism: very trendy right now.