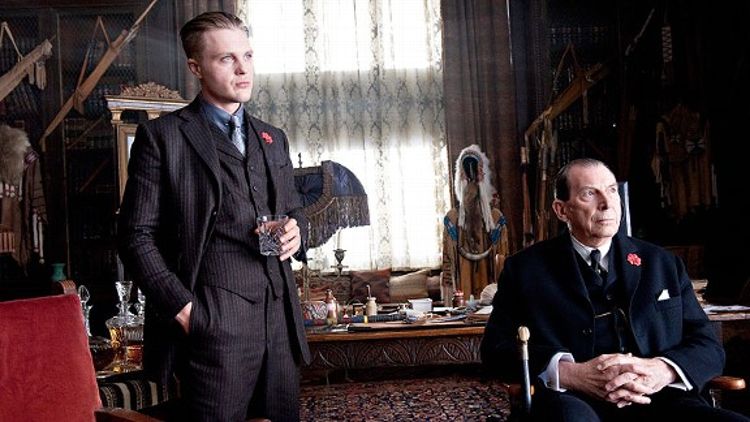 Steve Buscemi always sounds great as a tremendous phony. He knows how to press the oil out of each line without overdoing it. Shooter McGavin tips his hat. Nucky calls Jimmy (“James”) Darmody up to the podium to speak about military service. Jimmy, his hand shaking and upper lip jutting out as poutily as ever, rejects the assignation of the title of “hero” to his military service. Richard returns to his steampunk tumblr, where he pages through idealized domestic fantasies. Richard’s fondest dreams are Mad Men‘s Peggy Olson’s nightmares. He stops on his own head shot, lamenting the effects of the war on his once-flawless face and then packs a knapsack with an apple snack and puts on his mask and cap to go out. Nucky talks to Harry “Shooter McGavin” Daugherty in the locker room. Daugherty says they ought to play golf, not the quick fix to his problems Nucky was looking for.

Jimmy sits in a room full of old murderers with Eli Thompson. These are the Commodore’s friends, if you could call them friends. They are his allies, and his money flow depends on them, but they are no one’s friends. Old, selfish barons who have leeched their riches off of people and consider themselves worthy of respect for having committed genocides. One of them is a white mutton-chopped Dominic Chianese, as Uncle Scrooge McJunior. Jimmy gets caned by a Sioux-murdering, wheelchair-bound financier and is told to learn something about respect. Rather than upending the old man to make an Ensure shake from his brains, he walks out.

A shuddering green flatbed drops Richard off in the woods. He walks through the foggy forest clearing and sees a vulture on a log. Looking up, there are several circling overhead. It was birds that brought on Tony Soprano’s attempted revelations. Gillian dresses Jimmy’s wound and lights his smoke. Richard sits alone on a rock, cutting his apple with a knife like a teenager who just read the Transcendentalists for the first time. He takes his face off and feels the rain on his skin. He pours water on his lips and puts his war medal on. He lies down and pushes a gun barrel into his mouth. A dog steals his face, and then runs off with it.

Richard fears a humiliating half-faced existence more than he anticipates a quick but painful and pathetic end to life. Margaret asks Nucky where Owen Sleater is. Nucky’s brother Eli has shown up wearing the same sad uniform he always wears. Eli brings up an offer Nucky once put on the table, and Nucky says that is no more. Nucky’s subtle bruisings of his brother’s ego (“God distributes his gifts unequally”) are the best. Eli has come to offer up the information that the Commodore is now powerless. Eli summons up some brotherly crocodile tears, but Nucky wants more.

Nucky facetiously demands that Eli beg on his knees. Nucky blows up at his brother because he knows he can. They wrestle to the ground in the greenhouse, throwing punches and knocking over plants. Eli looks up the barrel of a gun, which is attached to Margaret’s grip. She walks him out of the house using whatever she learned from being in No Country For Old Men. Nucky points out to her that the gun wasn’t loaded. She begins realizing the seedy depths of the life she’s entered into.

The dog’s owner is a friendly transient who picks up Richard and brings him to a picturesque campfire shelter. The chef offers him a rotisserie squirrel. Somehow these other hobo gentlemen are interested in feeding Richard and not raping him. Nucky’s lawyer, who comes recommended by Attorney General Shooter McGavin, drops by. They lay out for Nucky how his case is going to go federal and then get dropped. Nucky wants a guarantee, but there are no guarantees in life or politics.

Richard communes with the helpful vagrants who don’t take his suit as an excuse to rob him but are rather so deeply in tune with nature they tell him the woods are not for offing oneself in. One threateningly pressures Richard not to kill himself. I love when strangers I just met offer deep, meaningful, emotional support to sustain me through times of torrential despair and self-darkness just when I needed it most.

Eli’s son lets in George to talk about the Commodore’s “issue.” Eli doesn’t take well to being challenged and accidentally murders George with a wrench. The Commodore’s team may be talented killers, but they also can’t control their rage. Angela and Jimmy have another one of their warm marital dinners. There’s a knock on the door and Jimmy cocks his Glock to prepare. It’s Richard, come back for his false family. Why is he so sure nobody will ever marry him? He has a hot half a face.

Richard doesn’t like the thought of being honored for his service because it also created the PTSD that has ruined his life. A hero’s welcome would only underscore the lack of heroism he feels he possesses, being the rare soul not to conflate murderous ability with talent. The Sioux-murdering asshole examines a beaded cloth and talks to his black butler Alexander about “savages.” Jimmy and Richard scalp the old dude in the name of Red Cloud, Conquering Bear, and Howard Zinn.

Margaret wakes up with a start, probably dreamin’ bout Freddy O’Krueger again, to the sound of screaming. She runs into Kitty in the hallway, hair tousled and robe half-closed. Kitty sneaks back into her maid’s quarters where Owen Sleater is smoking, self-satisfied, his own hair tousled as always. The other side of being good at getting people to stop doing things is being good at getting them to start.

Nucky sits at his grape-leather desk while Shooter and friends cavort with whores and demand large oysters and champagne. Seems like the good life Nucky strived for through corruption, greed, and hustling is kind of empty and soulless and populated entirely by old white men with too much money and no sense. Unlike the forest, which is full of kind, impoverished souls that show selfless interest in helping you without wanting any favors in return (kinda like that selfless coastal dweller Anna Draper). Eli buries George’s corpse in a beautiful field. Boardwalk Empire shocks us. It surprises us and entertains us. But it doesn’t really make us feel.