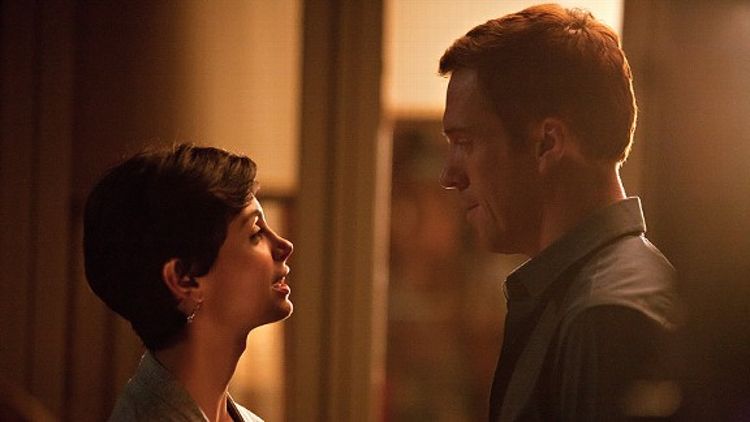 Everyone’s a spy in the paranoid universe of Homeland. Carrie is a professional spook, of course, gaining kudos and crushes from other operatives thanks to her cracking of the Abu Nazir money transfer. Yet she’s also continuing her semi-legal surveillance of the Brody household which has yet to reveal anything other than her own increasing obsession with this private family’s quotidian existence — she even remembers where Sgt. Brody misplaced his tie before he does. David Estes is also running two games: a public one, in which he praises Carrie’s derring-do, and a private one, in which he tasks her colleague with keeping an eye on her in exchange for a prestigious posting in Cairo.

But all this obsessive observation isn’t limited to Langley: The inside of the Brody home is a hothouse of furtive looks, sneaky sight lines, and wild suppositions. Brody himself seems to have figured out the nature of his wife’s relationship with his supposed best friend — he stares out at her from inside the locked garage — while Jessica Brody tracks her husband more closely than any of the cameras Virgil managed to install in her walls, desperately looking for any remaining evidence of the man she married. And in the meantime, the poor Brody kids are locked away in their rooms, clocking it all, waiting for something to explode that could destroy their family. All while Carrie races to keep something much larger from detonating.

This week’s episode was unsettling in all the best ways. As David OKs the pursuit of anyone who entered the secret hawala shop, Saul commands Carrie to shut down her homemade reality show at the Brodys’. But while the screens may go dark — poor Max won’t be able to ogle “hot” Jessica anymore — Carrie’s intensity burns brighter still. She accompanies Virgil to remove all the cameras but can’t resist a voyeuristic peek through the Brody’s dirty underwear — literally and figuratively. She even makes it into the garage and spies the Sergeant’s silver prayer bowl, but is forced to leave before she can piece it all together.

And though Carrie isn’t keeping tabs on Brody anymore, everyone else certainly is. His interview with superfamous television personality Lawrence O’Donnell went viral and, in the three weeks since it aired, he’s been on a finger-twitching media blitz: talking to reporters, to the vice president’s southern aide-de-camp who is dreaming of a political future for the former POW, and even to marines who are about to be deployed. He’s no longer talking to anyone at home, however, not even to share a family moment admiring the eight-point buck that’s been tramping around the backyard, inspiring young Chris but ruining the tulips. It all comes to a head at a party a few nights later. Jessica trades tequila shots and stories of post-traumatic sex disorders with a fellow military WAG, then asks Mike, who’s arrived with “Demmie,” the best blonde he could find on short notice, to rustle up Brody. The Sergeant of course, is in his garage spider hole, staring at his wife and best friend and obsessively cleaning a handgun. When shots ring out we fear the worst but get the weird: He’s gunned down the flower-hating deer and, even worse, doesn’t even offer to add venison steaks to the menu. Jessica’s stunned and furious reaction to this impromptu hunting trip was the best work yet by Morena Baccarin on the series: the realization that she’s living with a complete stranger written all over her pained and pretty face.

Carrie, meanwhile, is paired up with a new partner — an ambitious son of Lebanese and Guatemalan immigrants — and is tasked with tracking down one of the hawala suspects. The right one, as it turns out, is the professor who happily paid cash last week for a starter home in flyover county. While staking out the university, Carrie admits to a past fling with David Estes for the most Carrie reason possible: “He was the smartest guy in the near east division by a mile.” Every facet of Carrie’s life is a stepping stone in her personal quest for justice. She barely eats enough to stay alive. She sleeps with people because of what they can give her in the short term, be it pleasure, political favor, or perspective. Anything else gets tossed out as easily as the cups of stale coffee littering her apartment.

When the target — Raqim Faisel — heads to his car, Carrie and the new guy are in hot pursuit. But even the spies are being spied on: Mrs. Faisel gets a tip via mysterious phone call just in time to give Raqim a warning to keep driving. The signal? An American flag out the window. If you ask us, Raqim’s so-called terrorist demands — removing the president and replacing him with Eric B. — seem rather reasonable. But regardless, the God MC gets moved to the “cleared” board — the ill-gotten house in the nameless cul-de-sac remains a mystery — and the CIA focuses instead on less productive dead ends. Nothing is easy in Homeland, nor should it be. Each missed opportunity raises the stakes and the drama. And instead of making progress, all of our principles this week resort to making lateral moves of varying degrees of insanity. At a postwork birthday thing, David Estes drops the angry act with Carrie, and they agree to move past both what happened in Baghdad and before. (We learn that Carrie most likely broke up Estes’ marriage. Victoria is now happily remarried to a “nice Jewish guy in Fort Lauderdale.” The kids are converted. Mazel tov!) A spooked Raqim gets consoled and encouraged by his mystery wife. And as Jessica Brody braces for an oncoming storm, her husband heads out for a veteran’s support group.

Of course, Carrie can’t leave crazy enough alone: She crashes the meeting and crashes into Brody himself, luring him out to the parking lot with recognition from the debriefing and then, insanely, flirting with him. Only she can really understand him, she suggests, since she was also in Baghdad. “Don’t leave me like this!” Brody shouts after her, “all alone, in the rain!” Did Carrie just pull a Bradshaw and organize a meet cute in a downpour? It seems she’s tired of being an analyst and wants to be back in the field, or at least to be playing it. We’ve already seen that, in a pinch, Carrie will use herself like a weapon, and she seems to have reloaded here. It’s a dangerous, intriguing, and incredibly delicate operation she’s undertaking; let’s just hope she manages to tiptoe through the daisies lest she end up like the backyard buck: dead meat.