Halfway Through Season 3, Homeland Still Has No Idea What It’s About 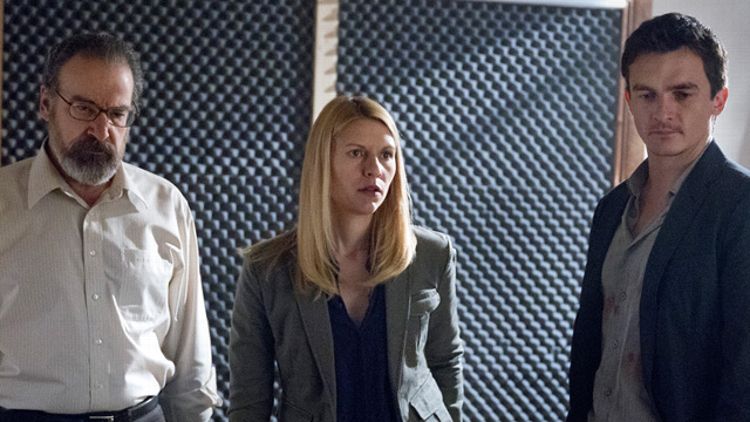 There has always been something grotty and amoral about Homeland. From the beginning, the show has presented a drone-cam vision of a topsy-turvy world, one devoid of good guys and bad guys, right and wrong. In fact, it’s a world that barely qualifies as a world at all: just a daisy-chained collection of safe houses and cabins, of anodyne condos and sterile conference rooms populated by well-intentioned patsies, Machiavellian suits, and jacked-up spies too busy getting off on being watched to pay much attention to what’s actually going on all around them.

And so, during my time away from the show these past three weeks (I was scoping out rental properties in Caracas; lots of open spaces but not much overhead — often literally), I actually came to appreciate the greasy film of seediness and disgust coating the A-story in this challenging third season. With Brody’s ghost haunting the margins and his body covered in track marks in a Venezuelan squat, the remaining characters have seemingly given up any pretense of doing their jobs. Instead they’re stuck in frustrating, self-made ruts: crazed Carrie flushing pills and circling the drain; cuckolded Saul playing checkers while his enemies, at home and abroad, play chess; Quinn driving around dumbly in an SUV and slipping through the sliding glass doors like some desperate, suburban security guard. In the wake of the 12/12 bombing, the actual adults have returned to wrest control of national security from a rogue cabal of homegrown emotional terrorists who came close to wrecking the country over a high-stakes game of footsie. At times it has seemed to me as if Homeland is admitting something about itself with this dead-end twiddling. It’s the sight of a mistaken-for-highbrow show coming clean about its own filthy heart.

This dirty bomb version of Homeland reached its nadir last night in “Still Positive,” when the dapper Majid Javadi refused to play the crusty, grudgingly respectable rival role Saul had carved out for him and instead savagely murdered two women — one his ex-wife — in front of his squealing infant grandson. This was cruel and gruesome in a way Homeland has rarely been, yet it felt somehow logical. It was a necessary corrective to all the misguided chin-stroking and clueless game-playing that had come before. It has been a blinkered, confusing, and lonely season; perhaps it makes sense for these supposed professionals to be jolted awake by the consequences of their misplaced confidence. On Homeland, the blowback is often more harmful than the explosion.

And yet a pessimistic part of me thinks I’m giving Homeland far too much credit. I like the idea of this seedy, nihilistic rhythm but the show is still incapable of locating the beat. Was the clinical cynicism of the CIA response to Javadi’s home invasion intentional? (I’m thinking of Quinn being forced to treat a man covered in the arterial blood of his ex-wife with kid gloves, and Carrie having to place a hysterical baby in a Pack 'n Play in the hopes that other, better saviors might soon arrive.) Or was it just emptiness?

This third season is now officially halfway done and I still have absolutely no idea what it’s about. No, it’s worse than that: I have no idea what Homeland is about anymore, full stop. The first season wrestled with a fascinating question about loyalty and betrayal. The second season wrestled with the fallout from punting on the answer of the previous question. The third season still feels as if it’s merely playing out the string.

Who are these people anyway? Carrie, Saul, and Quinn have no lives, no friends, no apparent hopes or dreams. (It’s been particularly disappointing to see Sarita Choudhury brought back from Mumbai only to skulk around on the margins with the sort of nonprofit lothario last seen on House of Cards.) Now that no one’s getting laid, where do their loyalties lie? The CIA has been decimated by the attack on Langley but even that can’t be blamed for how hollowed-out and claustrophobic this all seems, an Emmy-winning drama forced to rely on Max’s formerly silent brother for ballast and a surprise pregnancy for sensation. Did Saul actually think he was deserving of the top job? He’s not managing a federal agency. He’s running a score-settling LARP out of a tract house in Virginia.

What’s particularly irritating is that I’d have rated “Still Positive” much more generously had it been the season premiere. If you squint, the notion of Saul’s past coming back to undo him and the agency to which he has given his life is absolutely the right play for a post-Brody Homeland, and the shocking events at 1426 Longhill Road were a sign that foreign conflicts still have an insidious way of boomeranging back home. (I like Shaun Toub’s slithery elegance of Javadi, though not enough to forgive the show for once again having a terrorist mastermind slip effortlessly across the border to do his dirt. I’m sympathetic to the necessity of it — villains can’t be dramatic if they do everything by Skype — but come on!) Yet this wasn’t the fresh start that was required; the throat-clearing necessary even to get here, in Episode 6, was troubling at best, boring at worst. (I missed my chance to weigh in on the big reveal from Episode 4 but suffice to say I agreed with Linda Holmes here. It was a sign of a show still chasing the unrepeatable highs of the first season, only this wasn’t a twist, it was a trick.) Homeland is still moving in two directions, staggering onward even as it tries to explain away its past.

Nothing highlighted this backward drag better than the scene immediately following Javadi’s domestic slaughter. From the anguished cries of the suddenly orphaned baby and the look of horror plastered all over Saul’s bearded face, we cut to … Chris Brody. At least I assume it was Chris Brody; it could just as easily have been one of those cardboard cutouts that line movie theater lobbies. Chris is either the most well-adjusted child of terrorism in global history or he’s merely a maddeningly inessential cipher. After opining that Dana’s new last name sounds “kinda cool” he dutifully resumes his role in the background, his importance to the subsequent scene falling somewhere between “ottoman” and “lamp.” I honestly don’t think Alex Cary, the episode’s writer, was trolling us when he had a certain character insist that she can’t be Dana Brody anymore (“Why didn’t you say so sooner!” we all cried), but it felt nearly as cheap. I actually defended Dana’s presence at the beginning of the season as the best way for Homeland to articulate the violence of Brody’s betrayal. But her dreadful doomed lovers road trip burned through that goodwill like so much gas money and now that it’s in the rearview mirror — with little to no lasting purpose — it’s more frustrating than ever. It’d be nice if the Brody family was interesting without Brody but, as it turns out, they’re not.

It’s a bit late for the show to come to grips with that particular fact, but it’s far from fatal. The real concern ought to be the rapidly fading memories of Carrie Mathison and Saul Berenson as compelling, fully formed characters. The two have never stopped moving this season — the former jumping in and out of cars and hospital beds; the latter gruffly pushing his way past his wife and well-intentioned colleagues — which sort of makes sense as they’re both in a deep state of denial about everything that has occurred. But their frenzy also is an attempt to mask Homeland’s uncomfortable truth: Without Brody to agonize over, these people have very little to recommend them. Carrie’s behavior has been more idiot than savant — please, please don’t tell me she’s three months pregnant with a Brody baby — and Saul, once a moral beacon, has been muddied up too quickly to be believed. Worse, after their early-season interpersonal angst was revealed to be nothing more than a planned fishing trip for Javadi (with Carrie as the bait), I have no idea what their relationship is at all. It began as father/daughter, morphed into manager/employee, and now seems to exist solely thanks to entropy. I’d love to hear them take a moment to talk honestly about all the things they actually screwed up last year, not just Carrie’s bravery in trying (and, apparently, failing) to make them right.

A counterargument might be that Homeland isn’t a show that does well with downtime, that it’s never focused much on quiet moments or the private lives of its spies. But all the long minutes spent in the car with Leo could have been used in so many other ways: to show us Saul’s history, not having it painstakingly told to Fara (and, by extension, to the audience in photo-accompanied spurts), or to pick at the scabs of Carrie’s hollow life, not having her toss it aside like an empty bottle of tequila once Iran started heating up. (Honestly, an episode built around Carrie attending a yoga class for real might be a very good thing!) After weeks of fits and halfhearted starts, Homeland finally has its lights on again and pointed forward. (Quoth Quinn, after six hours of TV: “This is just the fucking beginning.”) My concern is that what was hiding in the shadows might not have been worth illuminating in the first place.