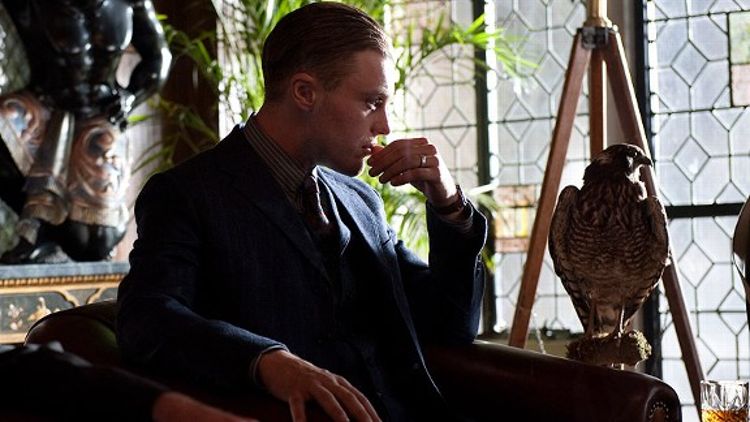 At the Port Of Hoboken, cases of “Feeney’s Irish Oats” are being unloaded. Where’s Beadie when you need her? Owen Sleater carries a case on his shoulder through the boardwalk as he passes through the striking dishwashers. He is given permission to enter the Ritz Carlton and pour a cup of whiskey for the manager there. Van Alden makes baby talk with his new nanny, and opens his Time Warner Cable bill to find divorce paperwork from his wife. Nucky and Margaret and little Theodore “A.J” Schroeder go to visit the ailing little girl with polio. Margaret and Nucky say condescendingly comforting things to her while she lies in bed with her legs no longer working.

Jimmy D is supervising the warehouse. Lucky wants to start selling opium to “artist types” since it’s easier to transport than alcohol. Nucky asks his mutton-chopped lawyer to sound less like his mother. Downtrodden Nucky is so much funnier than Nucky the king dick. Steve Buscemi was born to play underdogs and stifled men. All his menace comes out in Nucky’s vicious putdowns, as with firing his lawyer.

The old boys’ club are discussing how best to get the black underclass to work without upsetting the apple cart. The Commodore’s stroke is interrupted by a spasm of sheer hatred when Jimmy suggests they give them the nickel raise. His father counters that he might as well lift up his dress and get fucked. Although the villains in Boardwalk Empire are broader than those in Mad Men, the vulgarity of the hatred implicit in constant despicable “jokes” about race and rape is also a major theme.

Theodore prays for his sister Emily’s condition to improve. He says he can’t move his legs, then collapses in a git of giggles. “God help me but he’s got his father’s cruelty.” Does she mean his birth father or his stepfather? And why does she always fall for “cruel” men? Nucky offers to take Teddy into New York with him. Hopefully for spa day and manicures at the Plaza Hotel with Carmela and Meadow.

The strike continues in the main square. A mob of white men with billy clubs approach and the whole scene turns hopelessly violent. I wish it hadn’t been so satisfying to watch fictional cop Ray getting beat up after recent events, but it was. Nucky’s fancy new New York lawyer, Fallon, is slicker than the last one, claiming to be able to befriend judges for a fee. Eli takes care of Deputy Ray, now bedridden in casts and braces, saying he ought to take this time to reflect on what he’s done and should never do again. Margaret is at church praying for Emily. She seeks counsel from prim Father Intintola, who tells her she’s courted disaster through temptation.

Jimmy prostrates himself before Chalky and Dunn Purnsley, promising to make Chalky’s murder charge disappear and pay the families of those slain. Chalky balks at Jimmy’s refusal of his last point, and walks out with the upper hand. Teddy and Nucky talk family. Nucky’s dreams of being a father don’t mesh that well with the reality of having a bitchy little fuckhead just like himself for a son. Teddy saw Nucky’s act of arson last year and swears he won’t tell. Jimmy, Al Capone, Richard, and company argue in the warehouse from the last act of Who Framed Roger Rabbit then kill a pair of cartoon shoes by dipping them in Irish whiskey. Jimmy’s response to challenge and distrust in the ranks is to kick a crate and stop shaving.

Esther Randolph interrogates Van Alden about the mysterious disappearance of Hans Schroeder. Van Alden asks why he’s been directed to focus on alcohol if they’re going to keep bringing in other issues, and that he has no doubt Nucky ordered the execution of his lover’s former husband. The Butcher, more cautious after last week’s incident, opens his door with a small gun to let in a gangster resembling Flea who says the shoulder wound came courtesy of Waxey Gordon. Manny strangles Flea with a bass string. Esther visits the jailhouse-bound Eli to start asking him the really tough questions about the death of Hans Schroeder.

Margaret digs through her jewelry box and takes the hidden manila envelope of cash, and stuffs it into her purse. She comes to the sleazy priest’s office during his noon nap. He hides a glass of wine and takes the needle off his record player. Margaret sits on the couch and says she wishes the doctors had allowed her to have false hope about her daughter making a full recovery. She hands over the wad of bills and asks for whatever it takes to obtain the miracle in question.

Jimmy looks at the beautiful beach view outside. Does he ever wear shorts, or just tank tops, suspenders, and long pants? Angela arranges flowers and tells Jimmy she trusts him even when he’s going out of town. He wants her to be truly honest with him, but that would involve her telling him that the reason she doesn’t give a fuck about his criminal activities is because she has a scissor sister on the side again. She changes the topic and tells him a bath joke. That he actually looks at her and listens to it inspires her to bone him before he leaves for his mystery trip.

The doctor tells Margaret and Nucky that Emily’s paralysis is permanent. Even Margaret’s fancy burnt-orange silk hat looks sad about it. They talk about measuring the little girl for leg braces and starting physical therapy eventually. Nucky is comforting and practical. Teddy looks at an old family portrait (with Hans, not Nucky), then tucks it back into his treasure box with the signed Ty Cobb baseball.

The Butcher breaks into the Darmody house and holds Angela hostage. He covers her mouth and waits for Jimmy to step out of the bathroom. The door opens and he fires at the figure who flops to the floor, revealed to be Angela’s girlfriend. Angela pleads for her life, sobbing and shaking. Manny twists his head and shoots her, too. Her corpse slumps down on top of the other. He plugs a couple more shots in her. Otherwheres, Jimmy’s jalopy is trotting alone towards Princeton, N.J. Two episodes left!

Ragtime: Oh, yes. The opening song that went “the way you syncopate makes the whole town talk” is the old-timey version of Big Sean’s “A$$.”
Sex Scenes: None shown, but one last Jimmy/Angela clinch was implied.
Body Count: Three. One strangling murder and two sapphic soul mates killed.