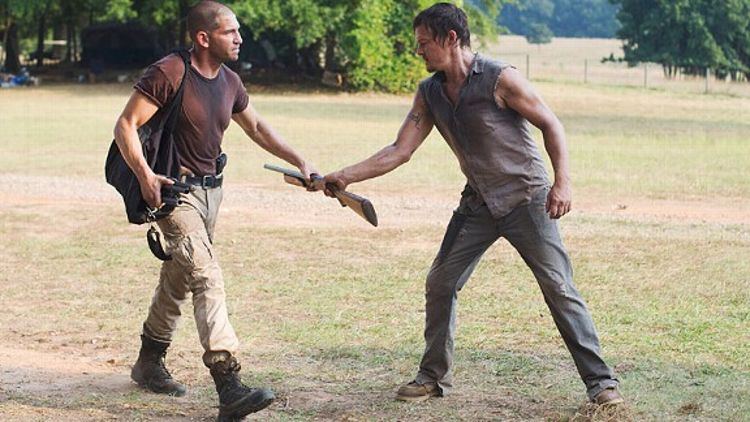 And so ends the first half of The Walking Dead’s deadly second season, thankfully not with a whimper but with a whole lot of bangs. Still, that’s all there is to be grateful for after seven episodes in which absolutely nothing happened, outside of Carol losing a child and Lori learning she’s carrying one — which, when you think about it, is kind of a wash. Seven hours of going to the pharmacy and coming back from the pharmacy, of cooking eggs and crippling chickens, of plugging bottles and logs instead of gaping plot holes. All so Glenn could get some. A valid use of time if you’re Glenn, of course. But an infuriating boondoggle if you’re not.

It’s important to remember that someone actively chose for it to play out like this, to begin the eagerly anticipated sophomore season of a highly rated show with a never-ending traffic jam and end it stalled out in a field. Whether the blame belongs to executive producer Frank Darabont (who was relieved of his duties at some point during the production of these episodes) or the bean-counters at AMC who decided that, post-Mad Men contract extension, the network could better afford a show in which characters argue about killing zombies rather than actually killing them (sort of like subbing in truffle oil for actual truffles or casting Stephen Dorff after Brad Pitt turns you down), this wasn’t a case of natural storytelling progression or even following the blueprint laid out by the comic. This was an independent and wildly wrongheaded decision to transform a promising series about surviving a zombie apocalypse into an overheated soap opera about rural campsite tension.

True, the show did follow Chekhov’s famous dictum, that if you lose a child in the first act someone will put a bullet in its brain in the last. But nothing summed up The Walking Dead’s creative rigor mortis more than the episode’s big reveal. As the smoke cleared from Shane’s barn-exterminating service and a skinny blonde child growled and hissed her way into the light, my first thought wasn’t “My God!” Or “Oh no!” It was: Who the hell is that? For a full minute, I honestly had no idea. Equally anonymous both before and after she had a hole in her head, Sophia was a meaningless MacGuffin from the start because we were never given a concrete reason to care about her. Yes, she was a child — but Rick shot one in the face in the pilot and we survived. Sure, she was Carol’s only remaining family, but Carol seemed well enough hanging laundry in the background with or without her daughter. Daryl announcing, as he did in the early going last night, that “We’re close to finding this girl. I just found her doll a few days ago,” made him seem insane, not heroic. The only character on this show less developed than Sophia is poor T-Dogg, and he’s been on-screen for fewer minutes than Daryl’s runaway horse. That the focus of all of the season’s fulminating was in the barn all along was meant to be jaw-dropping and bitterly ironic or perhaps merely sadly devastating. But, really, it was an indictment of The Walking Dead’s self-made predicament, and one wonders if it was also some sort of meta cry for help from the writer’s room: Sure, the woods are dangerous and all, but the show’s biggest problems are rotting right under their noses.

But before we got to the bullet-pocked finale we had to deal with 37 minutes of filler. Glenn opens the episode by interrupting breakfast (just how many chickens are on this farm, anyway?) to inform the gang about the barn full of zombies — a revelation that makes everyone rightfully upset, though not enough for T-Dogg to say anything. Shane, reasonably, is ready to go — he’s got the Hyundai Tucson gassed up and everything — but Rick, frustrating as ever, wants to stay. He interrupts Hershel’s quiet lunch of potatoes and Bible study to plead his case, but the homely host wants the intruders gone, intoning, “I’ve given you safe harbor. My conscience is clear.” (Banality 15:32.) Maggie began the hour by smashing an egg over Glenn’s head but eventually reveals herself willing to break a few more to help him out, and asks her father to reconsider. No dice. “They’re a strong group. They’ll have to go out and find their own farm.” (Honest question: Would a show about agricultural real estate be more or less compelling that what we’ve been watching? And are all farms naturally zombie-proofed or is that the sort of feature you add before putting a place on the market?)

Anyway, as a show of faith, ol’ Doc Cornpone recruits Rick to help him corral some errant monsters that wandered into the quicksand that conveniently rings the property. While the festering ghouls snap and bite at Rick’s Steve Irwin act, Hershel continues to insist that The Animal Formerly Known as Louise Bush (who is currently trying to chow down on Unknown Hershel Offspring No. 6) is merely a diseased farmer, not a soulless flesh-eater. In fact, he and Otis used to play these Ringling Brothers games all the time — which is weird because Otis had no trouble going full Rambo at the school and, come to think of it, how did Rick get his gun back from Otis anyway and … Sorry! Logical quicksand is even more dangerous than what Louise Bush got stuck in.

Meanwhile, Dale is busy hiding the guns from Shane, which seems wildly unwise because, you know, zombies. Still, it leads to a mano-a-beardo conversation in the woods in which Dale tells Shane that “this is where you belong … this world, what it is now.” The simmering split between Shane — who, despite his buzz cut and bad attitude is generally right about nearly everything here — and Rick echoes the sort of would-be philosophical divide between Jack and Locke back on Lost, only the crushing inertia of Hershel’s farm makes us long for the go-go days of the hatch. While some could argue that Shane’s zero-to-nutso transformation in this episode moves too quickly (as if moving too quickly is a problem on The Walking Dead, a show where the fastest thing around is Carl’s immune system), I would disagree. Shane’s crazy eyes as he walks from one ridiculous interaction to another — from Lori’s “even if it’s yours it’s not yours” parenting lecture to letting an 8-year-old demand that they stay camped out twenty yards from the house of the dead — perfectly mirrored my own. By the time he spies his bullheaded former best friend treating a Walker like Roy treated Montecore, he’s had enough.

While the rest of the cast looks on in varying stages of disbelief, Shane throws open the barn doors and leads the crew in a brutal game of high-caliber whack-a-mole, viciously gunning down every reanimated sweet corn farmer in the Peach State. Hershel falls to his knees in anguish, which kind of makes sense considering this is pretty rude guest behavior. And then Sophia comes straggling out and Rick puts her violently down, and with it our time on Hershel’s farm comes to an end. It could be argued that the utter pointlessness of this entire period was, in fact, the point: that there is no safe haven, that lost things (or children) can’t be found again, that everything always ends in violence, that everything always ends. Except such weighty proclamations would sound false even emerging from Hershel’s God-fearing lips; they’re cynical and unearned. A television series isn’t a comic book and it isn’t a video game: It, like a zombie, is in perpetual motion, always in search of more plot to devour. If the characters have nowhere to go, then there’s no reason for us to go along with them.

When The Walking Dead returns in February, it will be with a new man at the top (Shield veteran Glen Mazzara) and, one hopes, a new direction. Nihilism does not make for must-see TV, and there’s only ever been one successful show about nothing. (And, come to think of it, even Jerry got fed up after waiting 30 minutes for a table at a Chinese restaurant; how long do you think he would have given to an absent Sophia?) These past seven episodes of throat-clearing and thumb-twiddling were clearly intended to take the focus away from the adrenaline-spiking undead extras and make us care more deeply about the living leads. Instead they just made me want to kill them myself.