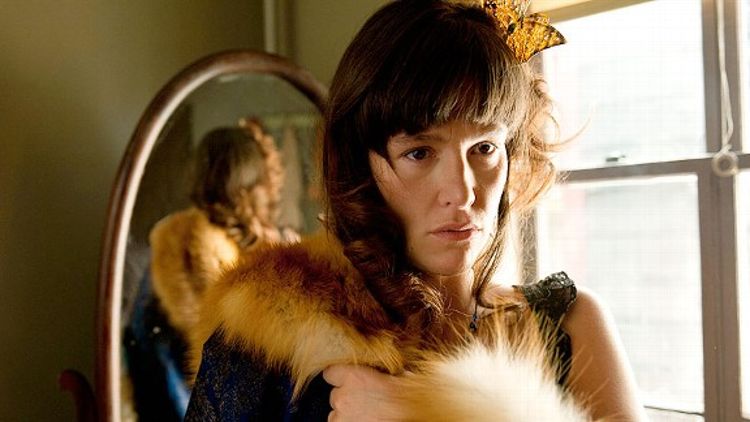 A victrola plays next door and clothes wave on the line as local creepy guy Agent Van Alden prays over his toast. Lucy the pregnant lady comes in and begs to be allowed out of the house. She is doing the best worst New York accent I have ever heard. She looks like she’s about to start a Babes In Toyland cover band. Somebody write “FLOOZY” on her breastplate. Margaret Schroeder is busying herself with Nucky’s business again, suggesting that they cut back on overspending and insisting that she trust him and ignore her cautious and inquisitive instincts. She has gotten a piece of mail from a detective. Damien and Lolly talk casino business in front of the Irishman. “The rollers want the good stuff.” Desperate times make for extremely desperate people. The Commodore’s people have another meeting to discuss the hooch trade.

Al Capone has come to Nucky’s house for a sit-down. Al Capone makes Nucky look as tall and imposing as he’s written. Capone has come to deliver the message that Chicago will no longer require Atlantic City’s services. Nucky wants to know where the Chicago bears plans on getting it from, and it’s Canada. Eddie fucking Cantor shows up at Lucy’s apartment. Lucy pours her heart out to him, because we are now meant to believe that this woman has friends. She tells him she wants to be more than a vaudeville video ho. He gives her a script. It’s the role she was born to play! A Dangerous Maid.

Al Capone is in the Darmodys’ living room roughhousing with Jimmy. They sit on Jimmy’s spacious sun porch and discuss Nucky’s potential imprisonment. Al Capone talks about how his own father made an honest living and “they worked him to death, like a chump.” Worse than facing the firing squad? Jimmy ties his son’s shoes and Richard looks on longingly. Nucky’s brother Eli cleans his father’s bedsores as dad reacts to the news that Nucky is inevitably going to trial soon.

Margaret reads the letter from the detective, containing photos of her other Irish relations that have sailed to the US. Nucky tells her how Chalky made bail as he decamps into bed. Nucky notices his wife’s fake smile and asks what is really going on. She spills to him that her folks are in America and want nothing to do with her. He comforts her and plans a trip to Paris. Jimmy’s mom does his nails, because she’s a cool mom. She says she’s forgiven the Commodore for making her a tween mom. Jimmy says the old man looks dumb when he colors his hair, and she says that aging is nothing to laugh about. Paz De La Huerta is killing it in this episode. She’s so awesome. Her slurred line readings have become like music to my ears.

Michael Shannon confiscates Lucy’s script, and tells her that what she might want is not allowed, because carrying his spawn is “a sacred charge,” but more likely he is worried talk would get out if anybody saw her pregnant. Nucky is trying to keep his empire intact while all its various spires are crumbling. Nucky calls the White House, where Vice President Shooter McGavin isn’t sure he can call in Nuck’s favor, and in grand Buscemi fashion Nucky suggests he’s getting fucked.

The Italians are angry about the poker game being held in a “grey area” territory. This plays out like a deleted scene from Guys And Dolls. The Italians demand ten percent, for pizzas. Van Alden meets with Doyle the bootlegger, who picks up immediately on Van Alden’s secret fondness for sluts. Lucy stares at her very pregnant body in the mirror and weeps. Nucky mopes in his own office, nursing a glass of something strong. The Irishman with the silly haircut comes in, he wants to assist Nucky. Sleater says his talent is “making people stop,” and fields that applies to doing that in include: everything.

The maid sees Margaret crying in her room. Bitches be sobbing! Lucy stands at the top of a staircase and contemplates tossing herself down it. She is cut off by a delivery man bringing her a new victrola, Agent Van Alden’s concession to her need for musical entertainment. The maids are gossiping in the kitchen and Margaret feels left out because by all rights she ought to be a poor Irish maid just like the others. She asks them to pour her a drink and stop calling her “ma’am.”

Nucky makes her leave the maid cellar to join him upstairs for dinner at a fancy restaurant on the main drag. When Van Alden gets home Lucy is her old self again, juking to ragtime from the new victrola. Jimmy is having dinner with his father the Commodore at the club with the blonde Marlene Dietrich hostess that is this show’s equivalent of True Blood’s Fangtasia. Nucky and Margaret show up, and Nucky insists that they stay. What I really want is for Artie Bucco to come out of the kitchen and tell everyone the specials at Vesuvio tonight. The violin orchestra plays “When Irish Eyes Are Smiling.”

Margaret orders the Lobster Thermidor, which the Commodore has already ordered. Nucky sits up and knocks the lobster off of the Commodore’s table, but not after a nice shot of Dabney Coleman shoveling creamy lobster meat into his maw. Nucky tells the story of how the Commodore picked Jimmy’s mother out of a lineup of child hookers and Jimmy looks pissed. Owen Sleater hijacks the truck from Richard and company, head-butting one dude. Richard gives him silent props. Jimmy gets a kiss goodnight from his wife, but still looks sullen as he ever does. Nucky kisses Margaret and heads to bed. Katie tells Margaret that she figured out her secret; she is Peggy Rowan, and Margaret treats her like a maid again.