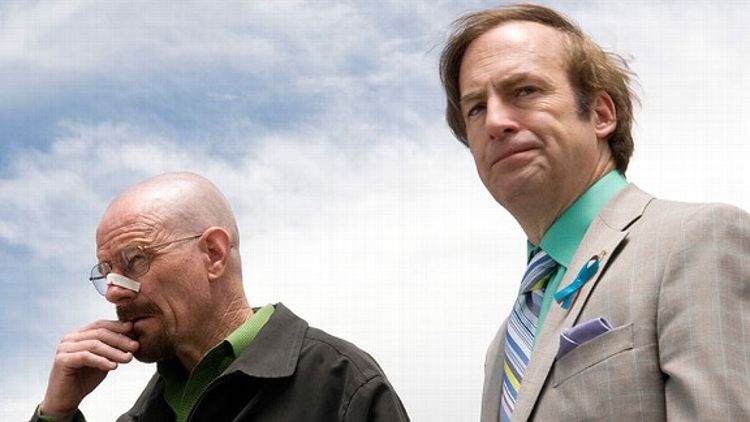 I don’t know that Vince Gilligan has a post-it stuck somewhere in his office listing the general narrative priorities of Breaking Bad. But if such a document were to exist, it’s fair to surmise that “Plausibly depict the interpersonal vagaries of the southwestern methamphetamine trade” would rank somewhere below “Revel in the philosophical ramifications of moral ambiguity,” and “Stylized violent imagery is kewl!” If the only, only, only possible way in the entire world for Walt to manipulate Jesse into helping him kill Gus Fring was to secretly poison a young child with a backyard plant, then, via a bodyguard’s strident patdown, switch out a pack of Parliaments in Jesse’s jacket pocket to help support the ruse, rather than just say, “Hey, Jesse, I heard that Gus thinks only pussies wear Affliction t-shirts,” then far be it for us to challenge. Good thing Walter’s spinning revolver — this is how we’re making all our important daily decisions from now on — didn’t wind up pointing a few degrees to the left, we’d be piecing together how a hibachi brought down an all-powerful meth kingpin. (Oh, right: spoiler alert.)

None of this tortured logic takes away from Breaking Bad’s mastery in the slightest, or the fact that every last slowly revealed detail of the plot was the height of drama. (Spelling has never been this exciting, and the next time a bell is rung at a bed-and-breakfast check-in counter, someone’s gonna need a change of pants.) If we’re going to believe that a meek, cancer-stricken high-school chemistry teacher and cuckold who happens to be the brother-in-law of a crackerjack DEA agent is capable of transforming into a cold-blooded supervillain inside a calendar year — and, obviously, we are, happily — then we’ll take Gilligan’s word that this is how such a metamorphosis might transpire. Stark realism is hardly the order of the day anyway, nor should it be at a network whose lights are being kept on by a show about zombie hordes being shot in the face by plucky survivors who can only communicate in bursts of clunky exposition. When we see Gus step calmly from the explosion to straighten his tie, we howl at the Wile. E. Coyote absurdity; when we see the T2 reveal of Gus’ blown-off face, we howl at the absurdity of that. (We cannot credibly speak to the medical probability of surviving, even for a couple of seconds, the loss of important parts of one’s skull, but that Wild At Heart scene with Sherilyn Fenn picking at the hole in her head after the car accident is entering its third decade of creeping us the fuck out.) The visual gag is the point.

Reading Gilligan tell Dave Itzkoff at the New York Times about how this one shot was planned with effects gurus over the course of months speaks to how important solitary, fetishized visual images are to this show: The floating teddy bear or Danny Trejo’s head on a turtle in season two, every single thing the Cousins did in season three, no matter how many emotional twists and turns the story takes, Gilligan wants you to turn off your TV with a particular image burned into your retinas, and if that kind of lingering iconography enriches or even confuses your understanding of the characters’ motives, so be it. Breaking Bad may not quite have The Wire or Deadwood’s ear for elevated dialogue (it’s close, though) but neither of those shows displayed this kind of command of visual language. If there’s any downside to this jaw-dropping (literally!) shot, it’s that the sheer gnarliness and audacity may risk overwhelming the quietly seething good work Giancarlo Esposito has done for the past two years, the same way no one ever talks about the racehorse from The Godfather having had a winning record in mud, but that’s probably just the morning-after shock talking. Consider those Jordans stepped on.

It’s been speculated elsewhere that the shot a couple weeks ago at the end of “Crawl Space” that made it look like Walt was cackling in a grave really did mark the death of “Walter White” and the completion of his transformation into a full-time Heisenberg. His subsequent actions have a cold, murderous detachment that other Morally Slippery Cable-TV Primary Protagonist Hall of Famers lack — Tony Soprano’s commitment to his family (Christopher excluded), or at least his interest in eating fried food with them, led to his demise (or did it?); Don Draper is more confused than devious. When he tells Skyler, “I won,” that’s Heisenberg declaring victory over Walt, not Walt declaring victory over Gus. Here’s hoping the whole thing ends with a one-man fistfight in a parking garage.

The fact that Walt elected to use the Lily of the Valley plant than the more lethal ricin itself is all anyone in the “Walt’s not that bad, he’s just trying to protect his family” camp has left, if there even is such a camp anymore. This is what’s become of his mercy and humanity, picking a slightly less awful poison. At this point, it’s debatable whether Walt even likes his family enough to hang out in a diner with them, much less be willing to give his life to save theirs; how many times has he even been shown in the same room as Holly? If he’s not in this for self-preservation, and he’s not in this for the trappings of power, then he’s in it for some deep-seated, ultimately insatiable need for validation and revenge against the universe in general, and that can’t end well. All we have is the history of everything ever as evidence. Whatever swelling-strings satisfaction gained from seeing Jesse and Walt team up again, both in killing Gus and in trashing the superlab, is short-lived; Jesse is Walt’s puppet, not his partner, and psychically shattered megalomaniacs tend to work alone anyway. (And let’s all pour out a little hydrochloric acid for Lavandería Brillante and its crazy basement — some good, good times in there.)

The final 16 episodes of Breaking Bad, however and whenever they’re shown, look to be not just an exercise in testing an audience’s investment in a thoroughly reprehensible lead character, of how hard we’ll look to find those last threads of mercy and humanity, but really, of how willingly we glorify the absence of those things. Soulless demons make for good t-shirts. Gilligan isn’t perpetually name-dropping Scarface for nothing.

The Iron Lady's Meryl Streep Is No Oscar Front-Runner (Yet)