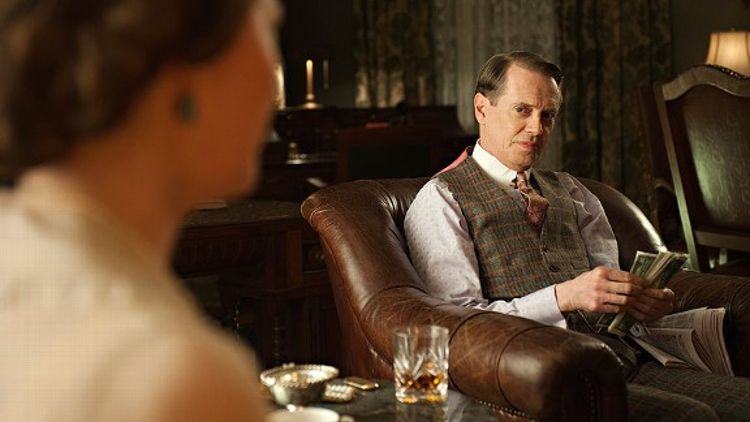 In the Canadian Club warehouse, some overdubbed dialogue is spoken by Jimmy as he surveys the cases and then hops into his jalopy with Richard. The Commodore ignores Gillian’s striptease as Diana, goddess of the moon. Gretchen Mol has always been superb at acting with her nipples and she still is. She prepares to hunt him with a bow and arrow and he seizes in his chaise. Margaret listens to the children recite meaning-laden doggerel, and then folds her arms at Sleater and Kitty’s flirtations because she wants that Irish pheasant all for herself.

Nucky refuses to tell her what Sleater’s been hired for and orders her to tip the servants. Margaret objects on the grounds that they steal, and Nucky says exactly, paying them off will keep them at bay. Chalky White enjoys a dinner at home with his son and two younger daughters that exist as of now. Chalky’s daughter wants her boyfriend to come over. Never bring your boyfriend around Omar, he is too fine. Richard shows up to creep into Jimmy’s home life. He admires Angela’s paintings. Maureen Dowd worked this thing into a Hemingway essay about people who worm their way into existent marriages, and I believe that’s what Richard is doing to Jimmy and Angela. Richard loves talking to Angela, which is something Jimmy has always been seemingly terrible at, despite his Princeton education.

Gillian reports the Commodore’s condition to his closest underlings. He appears to have suffered a stroke. Eli and Jimmy are fucking pissed. Eli suddenly calls out Jimmy and Gillian’s creepy Oedipal family dynamic. Jimmy pets a dead leopard. Hay, Jimmy. Eli strides out and Jimmy is left to simmer in the layers of sexual tension he has with his hot mom. She kisses him on the mouth (no tongue). Nucky does the walk ‘n talk down the hall into the Ritz-Carlton. He requires Arnold Rothstein on the phone. Rothstein’s wife needles him a little bit about his health. Nucky calls Rothstein for a favor: he needs a port, Atlantic City’s is watched. Rothstein offers Montauk which Nucky rejects in favor of Philly. They need to cut in a fellow named “Waxy” and Lucky Luciano. Nucky agrees to the conditions.

Chalky speaks before an assembly at the church. A woman complains about the crazy ragtime parties keeping her up at night with their youthful lasciviousness (Lucy and Van Alden?). A guy who works in service complains about unfair pay docks and horrible food at his job. A woman in a cool hat stands up and three more follow to ask what Chalky intends to do about their dead husbands. Hat Lady says that Chalky is a crook, taking without giving anything real back, just appearances. Van Alden bundles up some ones for the ragtime strip club and puts them in a safe. Would you rather have a cool but shady and amoral boss like Nucky or a spooky straight arrow like Van Alden? Van Alden’s employees talk smack on their weirdy boss and his weirdy weird habits. Van Alden comes in to complain about some graffiti on the bathroom wall that reads “Van Asshole” and they both try not to LOL.

Margaret tells the maids that they have to cut back, and they all come forth with their incredible hardships: crippled brothers and unemployed husbands. She asks them to thank her for the tip, and they say that Nucky actually promised them raises one night when he was drunk, and Margaret implies that all drunks are also liars. A Philadelphia butcher named Horvitz charms the pants off Jimmy and Richard. Herman Kaufman is introduced to the boys. The butcher Horvitz insists they stay and eat a little something. Kaufman says he hears they’re “flush with hooch.” Horvitz wants to cut out Waxy and team up with Jimmy and Richard. Jimmy makes a rare clever remark about creamsicles. He’s only clever when he means it.

A ginger dominatrix instructs a couple other courtesans in an Agent Provocateur ad for Mayor Ed’s birthday. Jack Dempsey appears at the Mayor’s birthday party. The girls are Philadelphia imports. You could not pay me any amount of money to sit on Nucky’s lawyer’s lap. Nucky’s lawyer points out that moving whores across state lines is a federal charge. Nucky is getting sloppy when he needs to be extra neat. Van Alden’s wife Rose calls and points out that she couldn’t reach him at the boarding house, that he no longer lives there. Rose is lonely and she can sense Van Alden’s adultery in his voice. Nucky meets with Chalky. Chalky wants revenge on “ghostriding motherfuckers,” not just money for his boys’ deaths. Nucky says that he gave Chalky his word. We find that Nucky’s word means increasingly less.

The hookers are being questioned about their having fucked a bunch of high powered politicians and securing votes. Richard stares at Jimmy and Angela’s wedding portrait as she sketches his face. She asks Richard if he’s ever loved anybody and he replies with an anecdote about his twin sister who he grew up with and gave him morphine after his injuries. He says that he felt unable to love her the way he had before, because of how different he felt himself. Angela is deeply moved by this story, which brings Richard almost to tears. He takes his face off for her. The deeply sexual nature of seeing Richard’s raw face is not lost on the modern lady, who is moved to sketch it.

Sleater is tying up some sticks of Acme vegan dynamite. In addition to being a handsome rogue and champion head-smasher, Sleater is also a chemical genius. Nucky, in a camel coat and green hat, nods. Rothstein bullies Lucky Luciano into swallowing his pride. At Chalky’s dinner with his future son-in-law, Chalky goes off on his wife for serving duck and peas and carrots instead of hoppin’ john. Chalky, who is drunk, rants so much that his daughter starts crying, and then having ruined dinner storms out of the house.

Jimmy comes home and asks what he is walking in on exactly, and the drawing party is presented as purely innocent. Angela kisses Jimmy as Richard leaves. Her obvious attraction to Richard is gently prodded at by Jimmy. Margaret looks worried as she reads the paper. Jimmy is excited that his case is going to go federal because the Mann Act means the Attorney General will be able to help him out. He didn’t screw any of the whores, he claims. Margaret asks for a hundred bucks. She goes off to bed, leaving Nucky in his leather chair.

Van Alden’s agents roll up on a purported still. They approach just in time for the explosion, which fully detonates and blows one of their faces off. Margaret puts the hundred in an envelope in her jewelry box, for reasons unknown. Chalky whittles outside in his house as everyone inside gathers around the piano like the Crachit family in a show of extreme togetherness. Gillian tells the Commodore the story of how he got her drunk and carried her upstairs and took her childhood away with one hand covering her mouth. Didn’t he just direct Carnage? Gillian slaps him around, and not for fun. INTENSE.