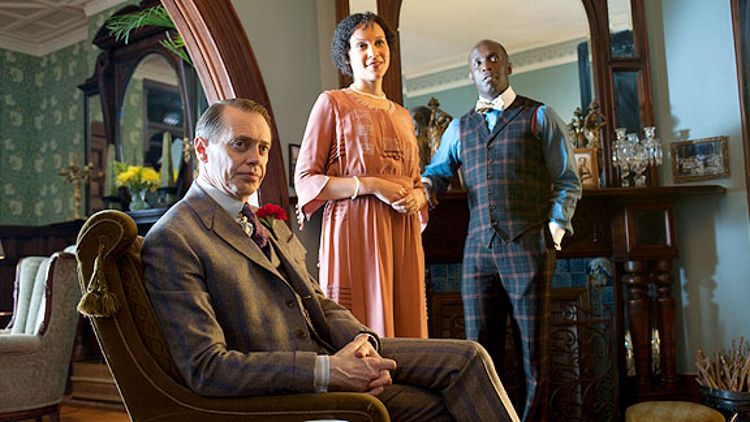 An old-timey moppet retrieves a bottle. I see Boardwalk Empire didn’t heed my suggestions about easing up on the ragtime. A crew of rum-runners led by Richard (Jack Huston) and Jimmy Darmody (Michael Pitt) move work. A lady shakes her boobs at Nucky Thompson (Steve Buscemi) to remind us of the DECADENCE and GLITTERING THEATRICALITY of these montages on Boardwalk Empire. Alone in his mansion, the Commodore (Dabney Coleman) practices parrying and thrusting with his spear.

Chalky White (Michael K. Williams) is supervising the hooch warehouse when the KKK descend. White hoods slit the patrolman’s throat and open fire with machine guns. As far as villains that make antiheroes appear “good” in comparison, you can’t beat the KKK, except with Nazis. One of them holds a gun to Chalky and makes the fatal mistake of reciting a motto, which gives someone just enough time to shoot him first. Chalky snipes a Klansman on the back of the truck, because of all the ways he planned to die, this is not one of them.

Margaret Schroeder (Kelly MacDonald) is having problems disciplining her children. Is it because she moved in with the guy who murdered their father in cold blood? Nucky comes home and he looks GOOD! HAYYY! Somebody got a new tin of Brylcreem during the offseason! Suave Nucky compliments Mrs. Schroeder, then rolls to the office. Elsewhere in town Jimmy comes home to his lesbian wife Angela (Aleksa Palladino) and sexy prostitute mom (Gretchen Mol). Do you think this guy has issues with women? Angela asks Jimmy’s mom not to undercut her authority again. Jimmy’s mom tells her that she used to kiss her baby’s baby dick.

Nelson Van Alden (Michael Shannon) shows up to the bureau with new agents. Hope they didn’t look too hard into what happened to the old ones. Van Alden’s godly wife accompanies him. A jaunty piano cuts to Chicago and another bar heavy on the garters and gauze curtains. Two heavies and the ghost of Edward G. Robinson sit at a table talking about the liquor-hijacking business. George Remus suggests they start buying from Cincinnati instead of Atlantic City or Canada. Edward G. Robinson sends his man Al Capone to tell Nucky the bad news.

Nucky holds a meeting about one of their new schemes: buying a bunch of land to sell back later and forcing the city to pay Nucky’s team to build the roads on them. A mustachioed character actor tells Nucky that they must deal with Chalky having shot a Klansman. Van Alden suggests to his wife that they go to Margate to see Lucy the Elephant. She is scandalized when she realizes that the Christian guide to Atlantic City she received actually lists all the dives and whorehouses.

Nucky and his brother Eli (Shea Whigham) confront Chalky about the news. Chalky’s wife Lenore shows off their son Lester and talks about how he’ll be attending Morehouse. Chalky claims that his “people” will protect him, and Nucky counters that without his protection Chalky will be hunted down by a lynch mob. Margaret Schroeder reports to the convent where her son has been having problems at school. The evil nun struck him with a ruler, and he claimed he did nothing wrong but he was playing with matches in a coat closet (you will remember that Teddy’s new father figure, Nucky, burned down his own childhood home last year).

Jimmy goes to see his father. Commodore Louis suggests that a badge and a gun, such as Eli has, don’t confer real power. He promises his son that he will soon see real power. Then he gestures to the dead big cats adorning his study. Jimmy’s father is a real salty old fuck in the Hemingway mode who murders animals for sport. Nucky makes a speech at the black church about how, as the treasurer of Atlantic County, he believes in racial equality and they will hunt down the Klansmen. He simultaneously makes a speech at the white church about how the whites aren’t going to stand for racial equality, then tells Eli to arrest Chalky for his own safety.

Van Alden and his wife dine at the only non-whorehouse restaurant in Atlantic City, where he orders turtle soup and a glass of ice-cold buttermilk, then absconds to the kitchen where the rum is being run in. Nucky is at the dead Klansman’s funeral, because he plays all sides. Jimmy comes to the wake because the Klansman was one of his high school teachers. Jimmy graduated from high school? Really? He’s such a Desario. He puffs a cigarette and makes Klan jokes with Nucky on the porch.

A mournful funeral organ drones away as Nucky asks questions about Jimmy’s relationship with his son, and their own weird father-son relationship. Nucky, of course, is barren of child and jealous. Nucky tells Jimmy not to trust his real father. Van Alden bought his wife an anniversary gift, which he gives her. It’s a brooch. He asks the waiter for some champagne, and when the waiter agrees, he begins a raid. The agents descend on the alcohol cellar. One of the agents cuffs the maitre d’.

Van Alden’s wife is so hot for Val Alden’s inflamed sense of moral rectitude that she kisses him on the mouth. They dry hump on the springless bed like a couple of teenagers at Bible camp. Nucky and Margaret hang out in their fancy boudoir and Mrs. Schroeder asks Nucky the tough questions about Jimmy’s real father and how Nucky misses Jimmy. She tells him about how her son has caught the firebug.

Van Alden and his wife part at the train station. Their long-distance relationship continues as she says she could never live in “Sodom by the sea” for long. Angela cooks breakfast for Jimmy and Half-Face Richard. Jimmy tells him to load up on biscuits. Richard asks, “How does it feel to have everything?” I’m not sure whether he’s talking about Jimmy’s job, his wife, or his two halves of a face.

Nucky goes upstairs to discipline Teddy, who has blossomed into a real little A.J. Soprano. He gets ready for a beatdown, but Nucky is the kind of violent thug who is gentle to those he loves and the people that the people he loves love. He also understands the power of a payoff under the table, as he bribes the kid to chill out.

Van Alden is counting bills out for Lucy Danziger (Paz de la Huerta)! Who is back! In a bed! And pregnant! In a sheer orange robe! Elsewhere, Jimmy and Co. are moving all the alcohol out of the shed. Nucky picks up a call and suggests Mrs. Schroeder and Teddy run ahead of him to the movies.

Richard is cutting pictures out of magazines to post on his steampunk Tumblr. They are all of happy families and domestic life, which he presumably never had. Nucky should have heeded the warning, because the cops show up to arrest him for election fraud, and all the silk shirts and ties in the world can’t save him now.

Margaret and Teddy are at the movie theater waiting for Nucky to arrive before the Charlie Chaplin jawn is over. Margaret should not be wearing that hat inside the theater. Jimmy gets a package (from his dad?) with a sculpture of two men hunting together. He puts it up on a shelf where nobody will ever see it, including him.