Black Mirror Episode 4, ‘Be Right Back’: Death and the RealDoll 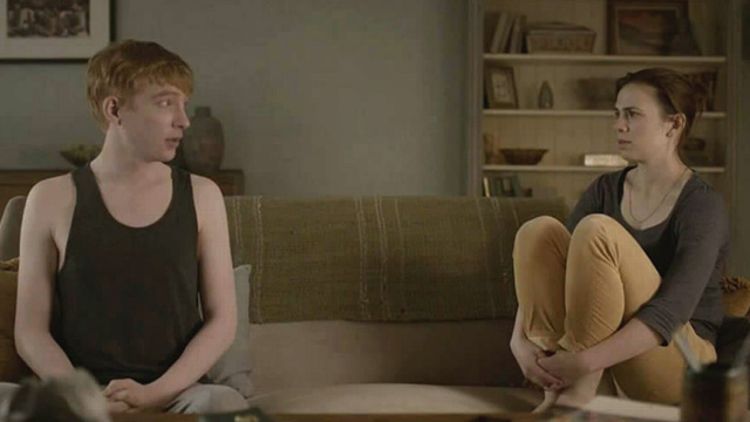 Apart from its technological concerns, one common theme in Black Mirror is the idea of getting what you want. Not in an American-bootstraps-Great Gatsby way; I’m talking more about moment-to-moment human urges. “Fifteen Million Merits” riffed on instant gratification in a society raised on reality TV and Internet porn, and “The Entire History of You” took our insatiable appetite for information about ourselves to bleak but logical extremes. It makes sense, because what is technology if not invention, and what is invention if not a way humans help themselves more expediently get the things they want? It’s generally safe to bet that, as a people, we have the ingenuity to eventually solve any problem or fill any void we can think of, outside of, y’know, inconveniences like war and poverty and death. The greater issue is deciding if a want should be satisfied. Because despite our ever-more-sophisticated gadgets and scientific breakthroughs, we tend to answer that question every time with the same animalistic, knee-jerk response: “Yes, of course I should have that thing.”

“Be Right Back” speaks to one of the most primal emotions we know: grief. Plenty has been written about grief and its stages; reams of self-help books and pamphlets are aimed at those who want to understand their mourning process. But at its most essential core, grief is just another want: You want that person to be alive again. Not in a practical, literal way, necessarily, but that is what your brain is grappling with: the absence of a thing — in this case a person — that you love. Mourning can feel like an endless back-and-forth between your inconsolable inner child and the logical part of your brain that is telling you to accept, accept, accept. In most cases, the logical part wins out, because one of the few things we know with absolute certainty as humans is the finality of death.

But what if we didn’t even have to accept that? We can’t defeat death, but what about all the bad feelings that linger for months, years, after a person’s passing? I keep flashing back to Liam (Toby Kebbell) from “The Entire History of You” microanalyzing his potential employer’s reactions after the job interview. If Liam lived in our Grainless current day, he’d do what the rest of us do after such an encounter: sit and stew over it in the back of the cab for a while (or, sure, the rest of the day), but eventually convince himself to let it go and allow things to happen as they may, because there’s no more insight to be had until he gets that rejection or acceptance letter. Similarly, if Martha (Hayley Atwell) lived now, not even the devastating realization that she was pregnant with her dead boyfriend’s child would convince her to do anything but continue to try to find peace in his absence. But in “Be Right Back,” she has a way out, the option to curl up and forever nurse herself on a slow drip of delayed acceptance. And, being a human in immense pain, of course she takes it.

Next week’s episode, “White Bear,” is generally considered the scariest Black Mirror installment, but “Be Right Back” is its own kind of horror film — even its opening minutes seem to tease some terrifying shock that never comes and instead stretches out in a slow, dreadful yawn. The car at the gas station on a rainy night, the cheerful couple, the drive home on a dark country road where you’re sure, just positive, some beastly thing will jump out and deroad the vehicle. The suggestion, of course, is that there’s no need for some external assault on Ash’s (About Time‘s Domhnall Gleeson, also the eldest Weasley bro in the Harry Potter films) childhood home: Martha will grow it herself voluntarily in the bathtub. (That’s another common thread of Black Mirror: Much of the horror comes from watching people do unthinkable things to themselves of their own accord, and by extension, imagining what kind of awful things we’ll be subjecting our future selves to.) On the phone, and eventually in the not-quite flesh, Ash’s presence is somehow menacing even though he appears completely docile; like Frankenstein’s monster, and really, any sad android character, he is scary not because of a bodily threat he poses, but because he is the manifestation of our hero’s lack of forethought. Their relationship, while reaching eerie levels of naturalism when it’s voice-only, takes on a different tone when he assumes a physical form; suddenly their connection as server-and-served is thrown into harsher relief. Ash becomes a tool; Martha can tell him to go or summon him as is convenient for her. She’s even less shy about having him go down on her, whereas she assured real Ash he didn’t have to. When Martha kicks him out of the house for the night and awakens to find him standing outside in his pajamas, patiently waiting to be let in, you get a chill. He’s like a lawn mower left in the yard, except he’s a lawn mower with her boyfriend’s collarbone mole.

While watching “Be Right Back,” I couldn’t help but think about its resurrection technology applied to an even more common loss than death: a breakup. The central emotion is the same, after all: the longing for a person, or rather a shared state with a person, that no longer exists. Why not continue Gchatting and talking on the phone to your heart’s content with the one that got away? Why not brew up a doppelgänger of them, even while the genuine article is still alive in the world, off having new experiences and seeing new people? “Because that’s super weird and messed up,” you say. “Because how will you ever continue with your life if you’re not forced to?” And it could be that the uncanny valley is a fixed realm that will forever be a bridge too far for us to cross. Last week I speculated that we could adapt to any technology, but maybe when it comes to fucking around with replicas of ourselves, even when we’re at our most emotionally crippled, we will finally have to say no to our lizard brains. Which would seem weird, since we already live in a world where you can buy a Lady Gaga sex doll, but I hope if Orient Industries offered a service to design a custom silicone re-creation of your lost lover, we’d say enough’s enough.

One of the interesting things about this episode is that it shows us a character meeting a technology for the first time, rather than one who has been living with it for a while. Martha familiarizes herself with and shudders at fake Ash’s creepiness right along with us. That’s where so much of the suspense comes from: Does she accept the doppelgänger or not? The episode is believable because her inability to resist him is punctuated with moments of real revulsion at the situation she’s in. Maybe I’m an optimist, but I think the revulsion would win out, even if it’s at the expense of her daughter “knowing” her “father.” But then, I’ve never had to contend with the tears of a grief-droid. That’s the irony of those last minutes on the white cliffs of Beachy Head — even as she’s trying to put an end to him, Martha still wants fake Ash to be more like real Ash. And just in the nick of time, he adapts in such a way that she’ll never find it in her heart to push him over the edge. The more we want from our inventions, the more they give us, and the less we’re able to give them up.