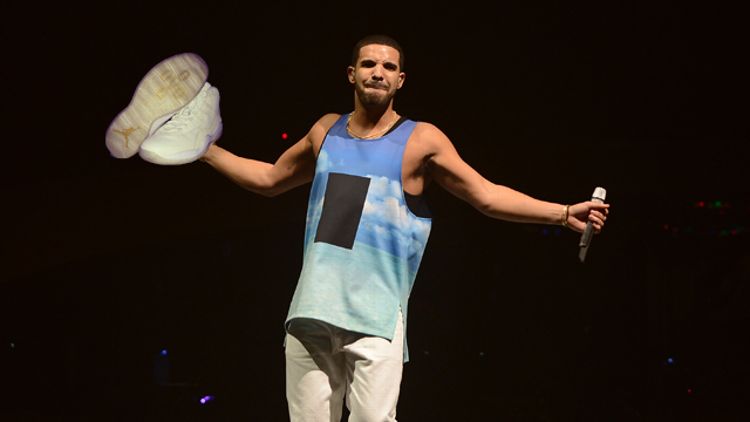 This has been a big 24 hours in the world of celebrity sneaker deals. Yesterday, Adidas confirmed it was partnering with Kanye West after the artist made a statement last week that his relationship with Nike was no more. The deal is reportedly worth $10 million, 95 percent of which America hopes he will use to build an athletic shoe that will enable fellow Chicagoan Derrick Rose to safely play professional basketball.

And then yesterday evening, at a tour stop in Portland, Drake made this announcement onstage:

“Shape Magazine says that Portland is number one for cyclists, microbreweries, and single women, so I’m excited about this.”

What an awesome story, Drake. Anything else?

“You know, growing up, I’m sure we all idolized this guy — he goes by the name of Michael Jordan. So today, I came to Portland and I officially became inducted into the Team Jordan family. So I feel like I’m at home right now.”

Well, then. Drake and Michael Jordan. Team Jordan meets OVO. I will say, for a young man with one life to live, Aubrey truly is getting the most out of his only. This might be one of the few instances of actual jealousy I have experienced regarding the 27-year-old, because what kid on the playground doesn’t want a pair of Jordans or their own shoe? And just like that, Drake got both.

Drake is essentially Michael Jordan now. The next generation of kids, instead of simply driving to the cup with their tongue out, will do so and then pick up someone else’s little black boy and tell that someone else to hold their phone and then walk off.

I can’t believe he did it. What an exciting new era for pickup basketball.

After his show, his smoother, drunker alter ego Champagne Papi previewed some of the sneakers on the social media.

They’re called “Stingrays,” which I’m forced to assume are the national cartilaginous fish of Canada.

It’s no secret he only cares about money and his city. With his 2013 of shoe deals and global ambassadorships for his home basketball team, it’s clear he’s staying the course.

Black Mirror Episode 4, 'Be Right Back': Death and the RealDoll