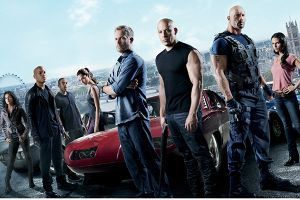 In the wake of Paul Walker’s death (revealed today to be “combined effects of traumatic and thermal injuries”), Fast & Furious 7 is going on indefinite hold. The movie was facing a tight turnaround to follow up this year’s successful sequel; the July 2014 release date will likely be rescheduled. A statement says NBCUniversal is “committed to keeping Fast & Furious fans informed.” Meanwhile, a portion of Fast 6 DVD sales will be funneled into Walker’s charity, Reach Out Worldwide, “a network of professionals with first responder skill-sets who augment local expertise when natural disasters strike in order to accelerate relief efforts.”

Childish Gambino’s Because the Internet is streaming on iTunes. I’m a few listens in — lots to say, but I wanted to let you give it a whirl first.

The Veronica Mars movie — which’ll just be called Veronica Mars — will premiere March 14, 2014, a year after Kickstarter made the project a reality.

Listen as Yo La Tengo sing about Toymageddon, then recoil in horror as a Eugene Merman-headed robot kills Ira Glass Claus with a laser beam. 2776, the charity comedy album that spawned this song, is coming soon.

This is how Spotify does royalties. Now you can reevaluate if you’re on Thom Yorke’s side or not.

Ben Affleck spoke about the Daredevil debacle in Playboy [via Latino Review]: “The only movie I actually regret is Daredevil. It just kills me. I love that story, that character, and the fact that it got fucked up the way it did stays with me. Maybe that’s part of the motivation to do Batman.”

House of Cards returns on Valentine’s Day 2014. Here’s a sorta-teaser.

For Jay Z’s 44th birthday, he and Beyoncé are going vegan for three weeks. “There’s something spiritual to me about it being my 44th birthday and the serendipity behind the number of days in this challenge; 22 (2+2=4) coupled with the fact that the challenge ends on Christmas day…It just feels right! So you can call it a spiritual and physical cleanse. I will post my progress.” Bey’s Instagram details some of the Day 1 goodness.

Scary Stories to Tell in the Dark is becoming a movie, and that will be the scariest movie there is. That one girl had SPIDER EGGS IN HER FACE!!!

Kim and Kanye might be getting married at the Palace of Versailles.

And the new movies and shows on Netflix in December are …