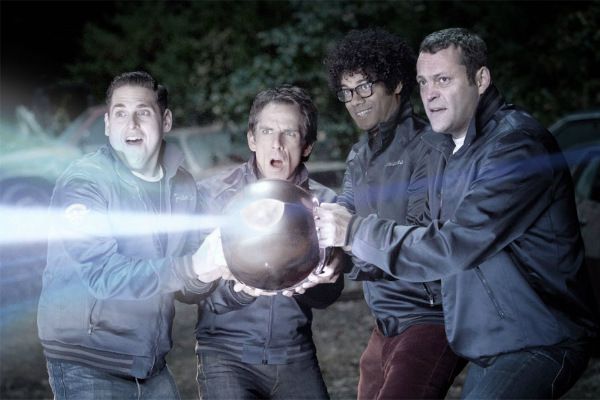 Their first collaboration, The Watch, hasn’t even hit theaters yet, but Ben Stiller and Jonah Hill are already planning on a second go-around. THR reports that Stiller and Hill are in talks to star in Aloha, a Hawaii-set comedy, for Fox. The Watch‘s Shawn Levy is attached to direct, and writer/director Nicholas Stoller — who worked with Hill on Forgetting Sarah Marshall and Get Him to the Greek — will tackle the screenplay. (That means they’re keeping things in the family: As you may or may not be aware, Hill and Stoller’s fellow Apatow-clan buddies Seth Rogen and Evan Goldberg are co-writers on The Watch.) Perhaps most notably, Stoller will be writing the screenplay based on “an idea by Hill that Levy, Stiller and Hill fleshed out on the set of The Watch.”

Looks like Fox has some confidence in The Watch if they’re looking to re-team three of its principals so quickly. That must be comforting for Levy and the rest of the Watch production, who had to negotiate tricky terrain following the shooting of Trayvon Martin. Originally titled Neighborhood Watch, the movie — a sci-fi comedy about a motley crew who take on the protection of their suburb — changed its title to avoid any possible association with George Zimmerman. Opening on Friday, it looks like The Watch has indeed managed to do that.

OK, back to Aloha — a few questions here: They just thought up the idea on set? So, like, did it just pop up, or were fast friends Stiller and Hill constantly staying up late, sharing ice cream sandwiches, and kicking around buddy-comedy pitches? And, if so, did their Watch co-stars Vince Vaughn and Richard Ayoade get jealous at all? Also, why the top secrecy on the plot of Aloha? My theory on that: Is it possible that Hill, while shooting Sarah Marshall, found himself in the possession of some bomb-ass Hawaiian weed, has been crafting any excuse to get back there ever since, eventually tapped his new pal Stiller into his plan, and then the two of them whipped up a thin plot that, bolstered by their shared star power, they knew would be a sure thing for a green-light but they are now embarrassed to reveal, as its thinness would immediately tip off the world that this is all motivated by a desire to get high? Again: That’s just my theory.