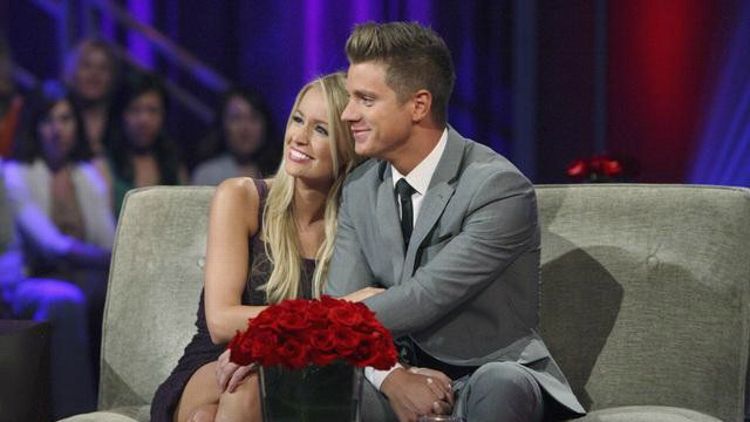 As a television show, The Bachelorette has depreciating returns. At first there are a couple dozen delusional dudes around to point and laugh at: This season, we had a goateed bar mitzvah DJ, a millionaire mushroom farmer, and a dude who carried an ostrich egg around to symbolize … well, to be honest, it was never 100 percent clear why he was carrying the ostrich egg around, but that was the beauty of the show in the early going. It was a spectacle. Last night’s three-hour finale wasn’t a spectacle, it was two people making the most important decision in their lives in the least appropriate manner. While the finale provided the formatted resolution it intended when Emily the Mom accepted Jeff With One F’s proposal, it still left a lot of questions on the table: Will they actually get married? Will Arie the Race Car Driver Who Slept With a Producer be the next Bachelor? Will Jef and Emily’s wedding get its own TV show? Will jeweler Neil Lane get his own TV show? What’s up with Jef’s hair?

To address the questions still unanswered, a special Monday edition of GRTFL, with two GRTFL Top Fives, was in order. On to the scores:

Jeff With One F (The Bachelorette, Lisanti), 65 points: “I would love to have this beautiful, perfect proposal, but I had that before and it didn’t turn out to be perfect at all. I don’t want that to happen again this time around. I want to be sure that if I get engaged it will be for real this time.” — The Bachelorette, Emily Maynard, last night

Well, she did get engaged (50 points), but the question is, how “for real” is it this time? In my opinion, not-very-for-real at all. The first of two GRTFL Top Fives in this special edition is the Top Five Reasons That I Don’t Think Jef and Emily Are Going to Make It in the Long Run, listed from “maybe he has a point there” to “well, at least she got a ring she can pawn out of the whole deal”:

5. The engagement itself lacked a certain somethin’ somethin’: Anyone who’s watched this show has seen a dozen or so of the most romantic proposal settings on the planet ever produced as the stage for the final rose: mountaintops, beaches, fields, forests, you name it. Where did Emily and Jef get engaged? A fucking intersection. How, with the entire country of Curaçao as a canvas, did the producers decide that a street intersection was the best play here? I think that the two of them should go with a traffic-themed wedding, with crossing guards as ushers and a cake shaped like a stoplight, hosting the whole thing on the corner of 23rd and Broadway.  Just own it, ya know?

Also, women of the world, spare the dude who is proposing to you the dramatic pause before answering the question. For real. Dude is already down on one knee, he’s not there to help you adjust the strap on your heels, you know what he is going to ask, so just say yes or no when he asks the damn question. When Jef With One F asked Emily to marry him, she thought about it for like 10 seconds before saying yes. Huge red flag.

4. Everything about Jef seems a little off. Even the spelling of his name: When we first met Jef he rolled up on a skateboard, tossed it in the bushes all Spicoli-like, looked at Emily, and said, “What’s up? I’m the cool-kid skater guy in my skinny jeans and goofy hair, you dig it?” Only he didn’t really pull it off. From his very first appearance on camera, there was a feeling that his actions were calculated and his motivations were inorganic. He felt like a kid who showed up to college freshman year with a new haircut, new wardrobe, and new nickname, desperate to course-correct after four years of being dorky in high school. Plus, if reality TV has taught us anything, it’s that people with non-traditional spellings of traditional names cannot be trusted. Fact.

3. She was in love with another dude the day before they were engaged: Let’s be honest, 99 percent of proposals aren’t really surprises. Sure, the lady in the relationship may have been totally shocked when she broke open the fortune cookie and saw a two-carat diamond waiting there, but she had an idea it was coming. Engagements are generally the product of a long-term committed relationship in which marriage has been discussed ad nauseam. In most cases, the woman who accepted the proposal was not making out with, crying over, and breaking the heart of another dude hours before the proposal. There has to be a part of Jef that watched the show last night and was happy to see him and his lady make out (3 x 5 = 15 points), but when he saw how emotional she was about Arie and said to himself, “I know she was into this dude, but do you really have to start crying just because his name was mentioned? Do you really have to tongue him down like that? Maybe she isn’t as committed to me as I thought. Who cares, how does my hair look?”

1. The whole thing is make-believe: Oh yeah, there is also the fact that every time the two of them have spoken it has either been (1) on the phone, (2) on camera, or (3) on a secret rendezvous sanctioned by a television network. I’m not saying it’s impossible to find love on network television … oh wait … yes, that’s exactly what I am saying … my bad.

All that aside, I can’t lie, at the moment of their proposal I did have an “Aw man, they are really happy and cute together, maybe this will work out” moment, and then that moment ended when they cut to Jef rolling up on his stupid skateboard. If they actually get married, I am setting the “Inside Emily and Jef’s Nasty Divorce: Was Another Man Involved?” Us Weekly cover over/under at three years based solely on the fact that he threw the skateboard in the bushes.

Arie (The Bachelorette, Simmons), 15 points: Emily, how did you not give us the rejected proposal that we’ve been waiting for? This is some bullshit. This is the final rose: I want tears, I want anger, I want heartbreak. Every season they have this final proposal scene on some mountaintop and I thought that this was finally the year a jilted suitor jumps off a cliff on national television. Emily had to go and break up with Arie the Race Car Driver Who Slept With a Producer the day before the proposal scene, depriving us of the chance to watch his soul get crushed, and depriving Arie of his chance at becoming the next Bachelor. Being a dude who makes out with the Bachelorette (5 points) only to get his heart broken on national television is actually a good look. Ask Ben Flajnik. You get a solid six months of sympathy sex from female fans of the show, and then you get to be the Bachelor. Win-win. But by dumping him the day before, Emily all but ruined Arie’s chances of becoming the Bachelor. The second GRTFL Top Five this week are the Top Five Reasons that Arie the Race Car Driver Who Slept With a Producer Will Not Be the Next Bachelor, listed from “I don’t even see how that’s relevant” to “Man, I hope this guy is a good race car driver, because you will never see him on TV again without a helmet on”:

5. Leaving his journal on Emily’s doorstep (10 points): So after the show is over, Arie gets on a plane, flies to Charlotte, and leaves the journal he kept during the filming of the show on Emily’s doorstep in a last-ditch attempt to salvage the relationship. OK, buckle up, it’s about to get meta, this entry in the Top Five is going to have its own sub–Top Five. Confusing, I know, but stick with me, here are the Top Five Reasons That This Was Creepy and Weird:

5. Keeping a journal is for teenage girls and 18th-century sea captains. Not grown-ass men.

4. Why didn’t you just mail it? Flying across the country to leave something on someone’s doorstep shows a serious lack of logistical know-how.

3. Journals aren’t meant to be shared. People who share journals write them knowing damn well that they will share them, so they aren’t really journals as much as they are letters to the person you shared it with. Arie’s real journal would have entries in it like “The cute sound girl bent over to fix my microphone and I totally saw down her shirt. She is stacked.”

2. Never show up at someone’s house unannounced. Everybody pretends it’s cool and they’re happy to see you, but they’re actually kind of scared of you for the rest of your life.

1. She is engaged: You are basically hitting on an engaged woman. Guess what? Hitting on women engaged to your friend isn’t going to score you a lot of points with the public.

4. His smile when he told Chris Harrison how good his life was now: When Chris asked him how he was doing, Arie said “good,” but his smile said, “Every time I go into a bar, women line up to offer me sympathy sex. I think I have impregnated a large percentage of the female population of Arizona at this point. It’s awesome, Chris.”

2. No rejected proposal: Again, we need to see you suffer, Arie. Could you really not squeeze out one fucking tear? In his post-breakup interview in the back of the car, he was doing that thing where he was trying his hardest to cry but just couldn’t pull it off. It was pathetic, really; this dude can’t even get broken up with correctly.

1. Losing Out to Jeff With One F: There’s something about getting dissed in favor of this little Jeff With One F fella that just doesn’t sit right. I can’t put my finger on exactly why, but … wait, yes I can, it’s because he is the type of guy who throws his skateboard into the bushes trying to be a badass in skinny jeans. There is no such thing as a badass who has to lie on his back to put his pants on.

So now that Arie has been banished to sympathy sex in Arizona, Sean has all but locked in the Bachelor spot for next season (albeit amid Roberto rumors), and Jef and Emily are planning their wedding, it’s time to turn our attention to what’s really important in the world of inauthentic televised courtship: Bachelor Pad. At the end of the Final Rose, when Chris Harrison was promoting tonight’s premiere of Bachelor Pad, he said, “You really won’t believe what happens this season,” and had a sneaky smile on his face that said, “Seriously, these people are insane, and if you thought this franchise was mindless, manipulative, socially corrosive entertainment before, you haven’t seen anything yet.” Obviously, I was giddy. Check back on Friday for the full GRTFL update including Bachelor Pad. I can’t wait.

Oh yeah, one last thing: I’m putting Jeff With One F and Emily’s chances of actually getting married at 70 percent and it being televised at 90 percent. Let me know what you think in the comments below.