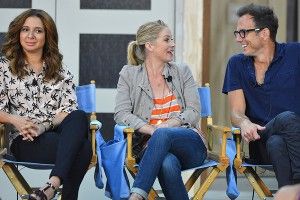 NBC has been trying to salvage something from Up All Night almost since the word “go,” knowing that simply letting a collection of talent like Will Arnett, Christina Applegate, and Maya Rudolph walk out of their clutches would be wasteful, foolish, and, honestly, downright disrespectful to the comedy gods. Now finally, against all odds, it looks like the network’s managed to squeeze something worth a damn out of this thing. Not a sound, well-principled half-hour sitcom — oh, dear, no. What they’re now offering up is a good, old-fashioned, behind-the-scenes TV mess. Hooray!

The latest word was that NBC wanted to reformat, switching from hip-young-carefree single-cam to stodgy-dependable multi-cam, which was a crazy enough idea on its own. Creator Emily Spivey and showrunner Tucker Cawley bounced out, and Nurse Jackie’s Linda Wallem was brought in to oversee the change. Then last week, Christina Applegate followed Spivey and Cawley out the door, announcing her exit in the wonderfully terse passive-aggressive fashion you’d imagine: “[T]he show has taken a different creative direction and I decided it was best for me to move on to other endeavors.” You understand, don’t you? The endeavors were calling. She had to go see what the endeavors wanted.

And still, it didn’t die: Officially, the plan to go multi-cam is in business, with veteran director James Burrows on board to do it the way they used to do it on The Stockard Channing Show.

Originally, the plan was to do five episodes in the new style; that’s now been dropped to one. And what about Applegate’s character? Would we have our first “nothing to see here; everyone go about your day” TV-actor replacement in eons? As of now, we’ll have to wait and see. This weekend, THR reported on the status of the show, saying that a few recent developments — including Maya Rudolph’s recently announced pregnancy — might mean NBC is finally ready to put Up All Night on that great ice floe in the sky:

Sources [say] the network is strongly considering abandoning the plan to keep the struggling series alive in the wake of star Christina Applegate’s exit last week. As a planned one-episode reboot of the show has stalled, co-star Will Arnett is being seriously courted by CBS to star in a Greg Garcia-written comedy, among others. In addition, sources tell THR that co-star Maya Rudolph has informed NBC that she is pregnant with her fourth child with director Paul Thomas Anderson. These sources say the show’s writers planned to incorporate the pregnancy into the revised version of the series, but that issue could now be moot. The show’s writing staff is said to be seeking new jobs.

The chaos comes at a key time for Arnett and Rudolph, with casting on the nearly 100 broadcast pilots already under way and both actors rocketing to the top of many network wish lists. Both Arnett and Rudolph have already received second-position offers for a number of broadcast pilots. CBS’ Les Moonves in particular is said to want Arnett for an untitled comedy written and executive produced by Garcia about a recently divorced man whose parents move in with him. ABC also is high on the actor.

Most likely, NBC will cave to all that pressure and common sense and pull the plug on Up All Night. Which, after all this action, might end up being a disappointment. So, hey, Up All Night — maybe, before you go, you can give us that one multi-cam episode? With whatever random blonde lady you like filling in for Applegate? You know, something small and really bizarre to remember you by?

Filed Under: NBC, Paul Thomas anderson, TV News, Up All Night, Will Arnett