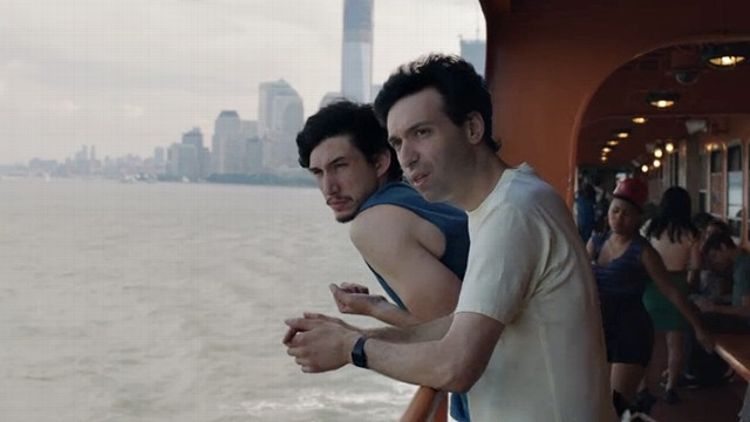 Oh Adam, you human bandsaw. Welcome back, hon. On their way to Staten Island during a wild dog chase, Ray tries to make contact with Adam by blathering aimlessly about sex (like he always does), prompting Adam to reveal that what turns him on is a woman who’s comfortable in her own body, regardless of age or type. Hannah certainly fits that bill and always seemed open to exploring any strange position Adam put her in, physically or emotionally. Ray tries to prod Adam into talking shit about Hannah, but Adam is a chivalrous ape who disapproves of gossiping behind her back. He praises Hannah’s often disastrous ethics because he respects her misplaced sense of justice. (Wait, does Hannah have a fetish for Libertarians?)

Ray was only trying to follow conversational cues, since Adam had just compared Hannah to a stuffed-animal prize from a fair that you lust for at the time because of the near-impossible degree of difficulty in obtaining it, but would ultimately hate later when it’s taking up valuable space in your home. Ray’s decision to tell Adam that he doesn’t find Hannah attractive was stupid, since he was essentially insulting Adam’s taste. Adam had just openly doubted his erotic acumen himself, but no matter. It’s like anyone’s hometown (or annoying relatives/crazy best friend/exasperating spouse/whatever). I can talk smack about my hometown of Los Angeles all day. But you don’t get to say anything bad about it, especially if you’re not a local. Only I get to do that. Ray sucks at male bonding. That means there’s another thing to add to the list he’s been keeping of all the things he sucks at. There’s nothing like having a temporary kinship with someone and then finding out that he thinks you’re, like, a billion years old and therefore not his peer. Ray has no idea what to talk about with Adam, so he just never stops talking. Do neither of these dudes like sports? Ray’s never had a relationship longer than a month, a job that he cares about, or a conversation that ends without hurt feelings. Usually, he’s the one inflicting pain as a defense mechanism, but lately he keeps taking direct hits. His love for Shoshanna may be real, but that doesn’t mean it’s healthy. He’s very aware of the fact that he might be exploiting her innocence, as any man in his early 30s who recently relieved a college co-ed of her virginity might be. Adam basically calls Ray a creep, spinning their earlier talk about how young girls and older women are the best to date because of their low expectations into Ray being an emotional predator. Ray doesn’t have short relationships because he’s a lothario. It’s because he can’t keep a girl around for very long; he doesn’t even have a place to do it in. I will miss Booth Jonathan, whose grandiose monologue about hating all his friends, being the real victim, and feeling used by everyone in his life reeked of doing too much cocaine. After he seduced Marnie with his bad art and even worse personality (and then callously dumping her), we may have seen the last of the debatably average-height Booth and his naked ass. I was disappointed Jorma Taccone didn’t show his lonely island in comedy full frontal, if only because I expect the dudes on Girls to match Lena Dunham’s fearlessness of body. I don’t think we’ve seen a dick on this show since Peter Scolari’s in “The Return,” and HBO owes back tax for never showing full male nudity on gigolo sitcom Hung and making me watch the show Tell Me You Hate Having Sex With Me starring Adam Scott. Are we having fun yet?

Maturity Level: The Artist Is Unpleasant For those alienated or confused by last week’s Tour De Hannah, this week’s episode offered a return to more traditional multi-character form. Hannah’s e-book story led off but was arguably the least important arc. Who hasn’t tossed her cupcakes after making it through an important brunch meeting with Hedwig? Although their friendship is in flux, Hannah continues to mentally compete with Marnie for prizes that might be mirages. First one to establish a real grown-up life wins, even if it means keeping your mouth shut forever about its misgivings. Hannah feels alienated at Booth Jonathan’s party, as who wouldn’t? An art guy in overalls asks Hannah if she remembers him from “one of Ryan’s shoots,” and I think you’re supposed to fill in “McGinley” but it’d be a lot cooler if it was “Trecartin.” The night ended up with Hannah horizontal but alone, lying to Marnie on the phone about how much writing she’d been getting done. Talking about writing isn’t writing, but it’s possibly closer to writing than, say, listening to every Nine Inch Nails video on YouTube while procrastinating from writing a premium cable sitcom recap. Possibly.

Maturity Level: Kinda I Want To A depressed Jessa is back in top bitch form. Her assertion that Hannah’s e-book doesn’t matter and won’t add anything to culture is blunt and exactly what Hannah herself already suspects, but Hannah can’t possibly write it with that in mind. Hannah has been given no real direction for her e-book other than to express herself, which has not worked out that well for her in the past. Hannah tends to unwittingly expose the worst parts of herself. Jessa likes giving advice, but it’s sometimes very bad. She always delivers it confidently in her seen-it-all tone. Jessa espouses pessimism dressed up as cynical realism.

Maturity Level: She Swept Up? So it turns out Marnie really did think Booth Jonathan was her boyfriend, presumably because she hadn’t been single since college and had no idea how things really operate. After passing the Soojin test (more on that later) and having made it through his claustrophobic video art, Marnie assumed she’d run B.J.’s gauntlet of pretentious art-guy trials. Naively but not insanely, she assumed that she was beautiful and smart enough to ace her callback to be Booth Jonathan’s Official Girlfriend. She even acquired a new Jane Jetson dress for the gig. It never even occurred to her that she was reading for the role of Booth Jonathan’s Fuckbuddemployee. Nor did it occur to her that B.J. might see her as temporarily desirable but still consider her interchangeable with the thousands (millions?) of other pretty, polished, high-achieving girls who could also picture themselves as Booth Jonathan’s Official Girlfriend.

Instead of getting mad and throwing things or yelling mean insights she can never take back after Booth reveals their real relationship status, Marnie starts crying and blubbering meekly about how much she likes spending time with him. It’s a carnival game, of course. As long as Booth Jonathan’s reputation as a cool, talented artist precedes him, he can foster a dating economy where he remains unattainable while high-caliber girls like Marnie and Soojin fight over him and feel insecure about each other. Booth Jonathan can lean back on his logic that female admirers are just in love with his image, and continue to feel persecuted and misunderstood while dumping girls who ask for more from him than just sex. New girls who have not heard about the trap will write off warnings as jealousy or bitterness and continue to fall right in. If Marnie were Hannah, she might retaliate with a vicious blog review of Booth Jonathan’s art, which is truly shitty, and taken the five hundred dollars. Jessa would fuck Booth’s best friend and/or closest rival. Shoshanna would probably also cry. Marnie is just, well, a pussy. As a matter of fact, she seemed kind of like sad bastard Charlie, whose door she will probably be scratching at again very soon.

Maturity Level: So Shame on Me Now Shosh encourages Ray to attend a seminar about becoming an entrepreneur, demonstrating that she fundamentally does not understand Ray. She’s still at the age where she finds things “adult and intriguing” and thinks that “adult” is a positive attribute. Shoshanna has gone from being the girl who always complains that she’s never had a boyfriend to being the girl who always complains about her boyfriend. Complaining about her boyfriend nonstop is a still way of backhandedly bragging that she has one at all. Soojin’s appearance in Booth Jonathan’s bedroom startles Marnie, who’s still seeing B.J. through rosewater-tinted sex glasses at the time. Soojin is a hot hipster chick with Zooey Deschanel hair and high-waisted shorts. When B.J. made his first appearance last season, he was introduced with Marnie’s blowsy ex-boss, Reese, loudly accusing him of having a fetish for Asian women, as she started to express an unfinished thought that began with “You know what I say about men who fuck Asian women” and would almost definitely have ended with something racist. That was back when Booth Jonathan was fucking Koi Scharf, who I’m guessing wasn’t invited to his party. Marnie is initially intimidated by Soojin and confused about what her relationship is to Booth. After finding out Soojin is just a lowly personal assistant, Marnie happily sinks back naked into bed, reassured of her station in Booth Jonathan’s life. Marnie thinks that she is clearly wife material, based on a lifetime of being rewarded for cultivating feminine graces. But that’s because she’s guileless enough to think Booth Jonathan is looking for a wife, or that he’d possibly make a good husband. Even if she detected the jilted lover’s scorn in Soojin’s tone, Marnie never thought that she’d be in Soojin’s position, let alone so quickly. Booth Jonathan’s fame as an artist and womanizer means that all kinds of otherwise rational girls will be stubborn enough to think that they’re different from and better than all the other gorgeous, interesting girls he’s been with, and that he will fall in love with them. All of them end up like Soojin; rolling their eyes, embarrassed they ever thought they liked him. Booth Jonathan only seems intense until you realize he’s just a dick who drinks goat milk.

Maturity Level: This Is Crazy Do you think she likes Wu-Tang?