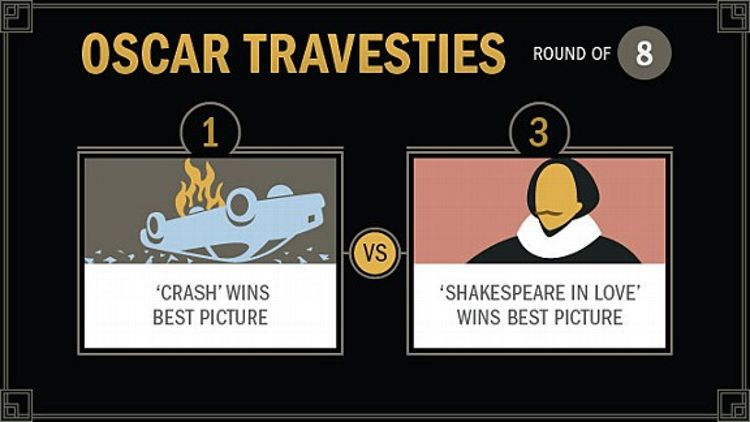 It was The Wizard of Oz in 1939 that provided Hollywood with its most enduring depiction of the divide between the head and the heart. In their desperation to gain the organs they lacked, the Scarecrow and the Tin Man proved themselves willing to endure any indignity, from flying monkeys to grabby munchkins. No task was too great, no road too yellow or too long. Everything was worth it in their tireless quest to appear either smarter or more caring.

The Wizard of Oz didn’t win the Oscar for Best Picture — the trophy that year went to some overheated epic about wind. But in many ways the shared journey of the Scarecrow and the Tin Man toward wildly disparate goals presaged every stupid Academy decision for the next 70-plus years. When given the chance, the Oscars always trip themselves up lunging for hearts or smarts, never rewarding actual artistic achievement when something tear-jerking or historical is there to get in the way. Hollywood, as one or two (million) people have blithely commented, is a wildly insecure town, its denizens desperate to be thought of as both relatably human (they are not) and inspirationally erudite (ditto). The Oscars, more often than not, reflect this; the final tally saying more about how the voters wish to be perceived than anything about the movies themselves. 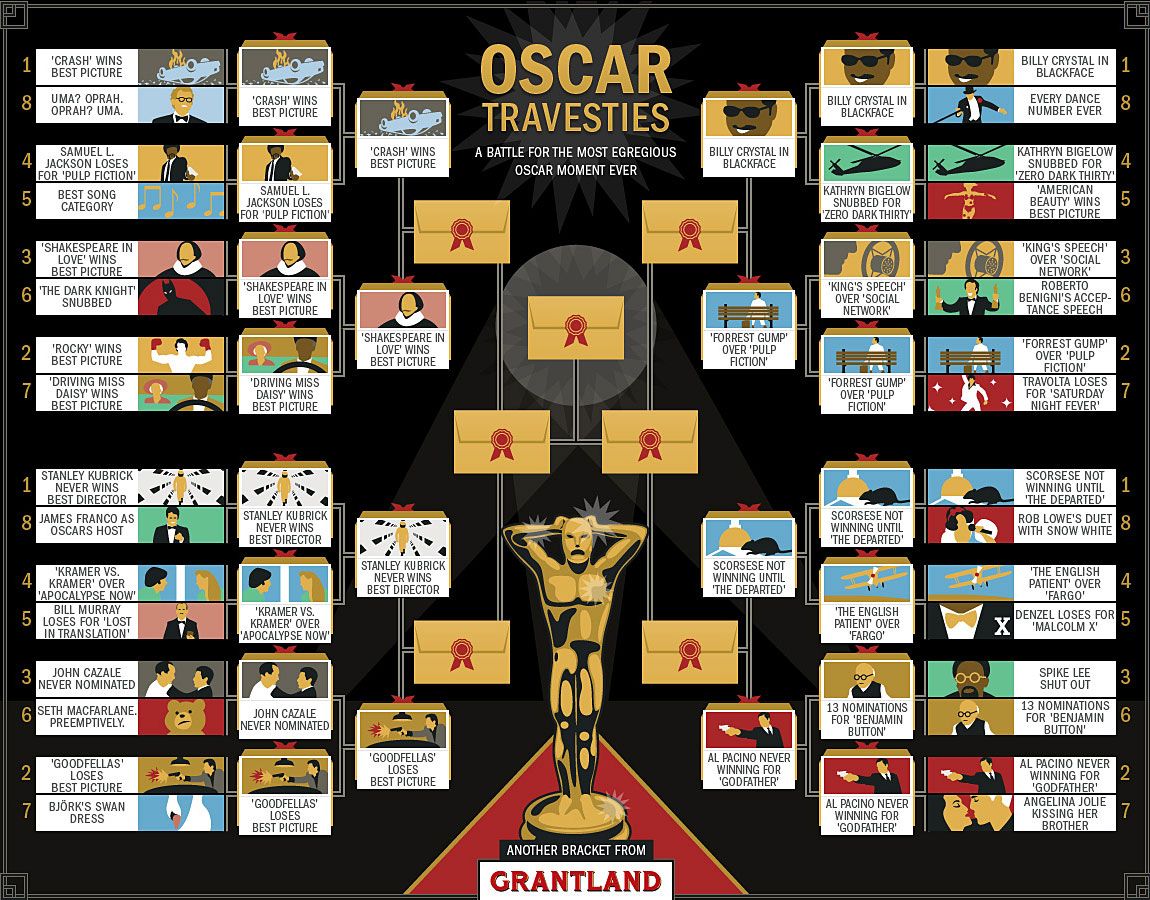 And so, because of this, it’s possible to divide all major Best Picture boners into Tin Men or Scarecrows. The uplifting King’s Speech trumping the prickly Social Network? Classic Tin Man. Ditto the gloppy English Patient shoving icy Fargo in the wood-chipper and Forrest Gump running all over the track marks of Pulp Fiction. On the other hand, the early ’80s trend of rewarding tediously respectable fare like Ghandi, Chariots of Fire, and The Last Emperor was aspirational Scarecrowism at its finest. And why recognize an actually smart film like The Insider when American Beauty is there to validate the promise of intelligence — as unknowable and weightless as a trashbag in the wind? (Don’t bother thinking about it, man. You’ll just ruin the moment.) At times it feels like the only things separating the Academy from the Lollipop Guild are heel lifts and hair plugs.

Which brings us to the Egregious Eight, the time in our tournament that could turn even Bravehearts into cowardly lions. The remaining travesties are made all the worse for how utterly unsurprising they seem in retrospect, evidence of the same sort of glad-handing groupthink that gave us tap dancing soldiers and duets between Kojak and Mr. Miyagi. Of the four matchups being voted on today, the two on the bottom half of the bracket are both very clearly sins of omission. The undercard of Martin Scorsese’s delayed recognition — 40 years of proving an Italian-American from New York had so much more to say than a mob movie (and so many ways to say it) and he wins for a mob movie? Set in Boston?!? — vs. Al Pacino’s immortal performance as Michael Corleone getting treated by the Academy like Sonny at the toll plaza is essentially a wash as both goodfellas eventually got their statues. Still, I’m going to predict a slight upset here: If ’70s voters had put down their pet rocks and given The Godfather the acting trophy he deserved, there’s a good chance we’d have been spared the mawkish hoo-ha of Scent of a Woman. (Fun fact: Did you know Al Pacino and Martin Scorsese have never worked together? Snub recognizes snub!)

The second clash also involves Marty, as the defeat of Goodfellas, an undisputed, endlessly quotable masterpiece delicately carved from genre convention with the precision of a razorblade through garlic, at the earnest paws of Dances With Wolves faces off against the permanently Oscar-less Stanley Kubrick. It’s not hard to play a game of what if here: If Kubrick had only survived or not asked Tom Cruise to make-out with tall women on camera would he too have eventually earned a make-good statutette? (It’s also worth wondering what Kubrick’s late-career, audience-pleasing Departed would have looked like. Probably Barry Lyndon relocated to colonial Williamsburg.) But compared to the hall of fame injustice that is Kevin Costner sending Martin Scorsese to get his shinebox, Kubrick’s plight is merely egg noodles and ketchup. I predict Goodfellas‘ outrageous loss keeps it winning for another day.

At least Stanley can haunt the Overlook Hotel for all eternity knowing he fell to some worthy competitors (Don’t front: Carol Reed did the damn thing with Oliver!) By contrast, the four disasters left on the top half of the bracket are all perfectly inexcusable. Billy Crystal in blackface has had a surprising run thus far — despite its oddly high seeding, it still strikes me as the Cinderella of the tournament. But while Billy’s makeup washed off, the stain of Kathryn Bigelow being ignored for Zero Dark Thirty will linger for years. Either way, I have to think Mr. Saturday Night is finally put to bed this round by Forrest Gump; the Sammy Davis Jr. act was offensive to some, while the dopey, self-important Gump should be objectionable to all self-respecting citizens, from long-distance runners to shrimp fetishists. Unlike Pulp Fiction and The Shawshank Redemption, films that have become only more watchable and useful as analogies in sports columns over the years, Forrest Gump has grown as stale as a box of chocolates the week after Valentine’s Day and become twice as forgettable.

As for the marquee matchup of today’s voting — the shocking victory of Crash vs. the Machivellian, Weinstein-orchestrated triumph of Shakespeare in Love — well, the outcome seems to me to be as face-slappingly obvious as the story of how Los Angeles triumphed over racism by giving Matt Dillon a standing ovation. Shakespeare In Love didn’t deserve to win the big prize, sure, but it also didn’t not deserve it. It was a perfectly charming, competently made trifle which, if we’re being honest, makes it better than half the Best Picture winners in history. Crash, on the other hand . . . My friends, nothing is worse than Crash. Paul Haggis’s preachy disasterpiece is more ham-handed than a sloppy deli guy in a non-kosher neighborhood. If you’ll allow a belabored return to an earlier metaphor, it hits the full Oz in its blinkered, industry delusion: it thinks it’s smart when it desperately needs a brain, it grasps maniacally for heartstrings when it hasn’t got a pulse of its own, and, worst of all, it fancies itself courageous despite cowering from actual insight at every turn. This bracket is your chance to drop a house on this wicked whiff from the west coast. Click your heels and get voting.

[2] Forrest Gump over Pulp Fiction and The Shawshank Redemption (WINNER): 3,036
[3] The King’s Speech over The Social Network: 907